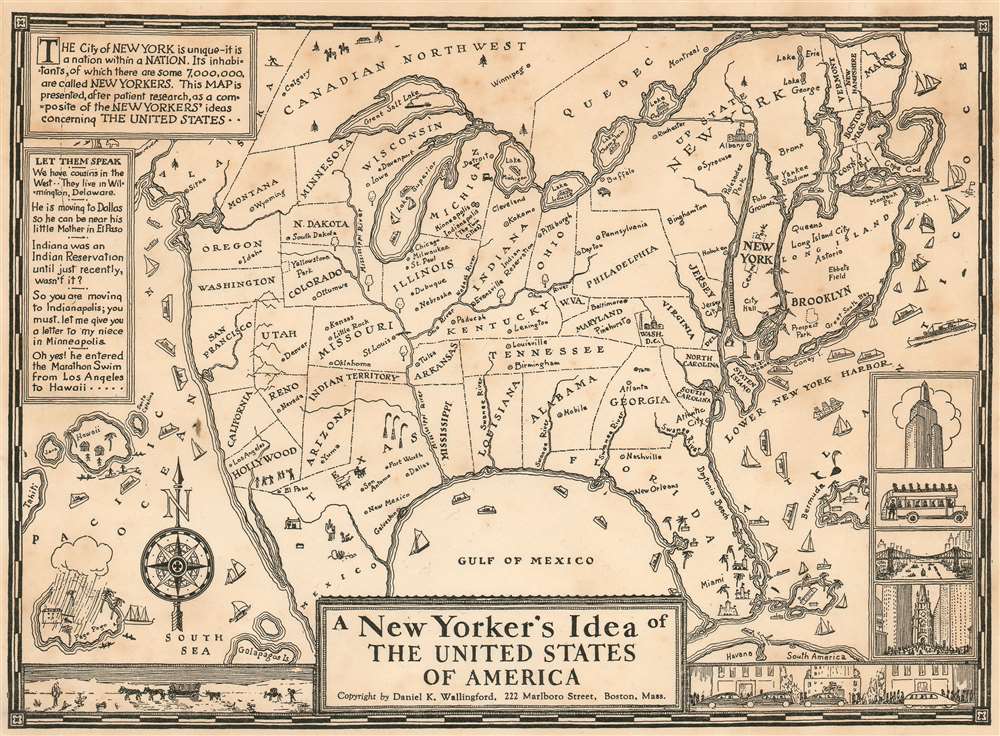 Iconic and hilarious pictorial map of the United States as imagined by a New Yorker in the 1930s.

This scarce and whimsical 1937 map depicts the United States, as seen by a 'typical' New Yorker - as envisaged by the Bostonian author, Daniel K. Wallingford. The map presents a highly distorted view of the country (and a similarly distorted view of the New Yorker), wherein New York State, and in particular Manhattan and Long Island are ludicrously out of proportion in relation to the rest of the country.

The map is a charming combination of humor and satire, depicting the provincialism of a New Yorker, to whom the rest of the country is unimportant. Names of places are either inaccurate or random, showing a New Yorker's supposed ignorance and disinterest in the rest of the country. The American southeast sports a massive Florida and four rivers, all named 'Swanee River'. Hollywood and San Francisco take up two-thirds of California and are shown as separate states. Minneapolis and Indianapolis are shown as 'twin cities' in Michigan, with Chicago, Milwaukee, St. Paul, Dubuque and Nebraska as cities in Illinois. Nevada is a city in Reno, and New Mexico is a city in Texas. The Great Salt Lake replaces Lake Superior, while Lake Michigan takes the name of Lake Superior. Lake Champlain is bigger than Lake Michigan, while Lake Erie is depicted as tiny lake in northern New York.

The map also includes beautiful illustrations of ships, whales, and islands; notable features of several states are also shown pictorially (e.g. the oil wells of Texas.) The lower right quadrant of the map includes four views of New York, including the Empire State building and the Fifth Avenue Coach. Another charming illustration along the lower border depicts a view of the desert and wagons on the left and a city and cars on the right. The upper left quadrant includes amusing text, attributed to actual New Yorkers: 'We have cousins in he west... they live in Wilmington, Delaware.' 'He is moving o Dallas so he can be near his mother in El Paso.' 'Indiana was an Indian Reservation until just recently, wasn't it?'.

This map was first published in 1936 by the Columbia University Press; Wallingford's imprint for that edition listed his address as 54 Falmouth Street. A second edition was produced in 1937 for the Times Book Fair, with the address changed to 222 Marlboro Street. (As is seen here.) A further edition was produced in a larger format for the occasion of the New York World's Fair on 1939.