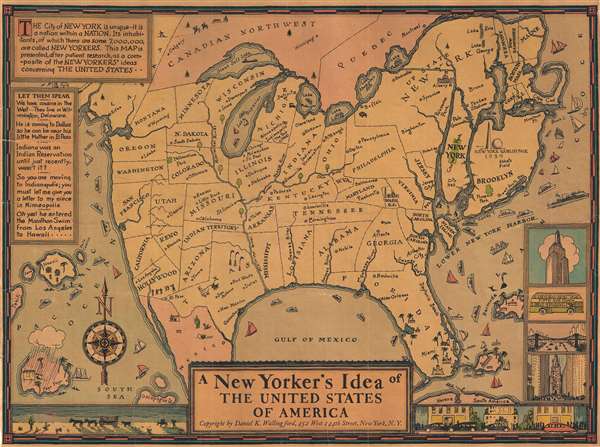 Iconic and hilarious pictorial map of the United States as imaged by a New Yorker in the 1930s.

The map is a charming combination of humor and satire, depicting the provincialism of a New Yorker, to whom the rest of the country is unimportant. Names of places are either inaccurate or random, showing a New Yorkers lack of knowledge or interest. For example, southern United States is humorously depicted, with a massive Florida, and four rivers, each named 'Swanee River'. Hollywood and San Francisco take up two-thirds of California and are shown as separate states. Minneapolis and Indianapolis are shown as 'twin cities' in Michigan, with Chicago, Milwaukee, St. Paul, Dubuque and Nebraska as cities in Illinois. Nevada is a city in Reno, and New Mexico is a city in Texas. The Great Salt Lake replaces Lake Superior, while Lake Michigan takes the name of Lake Superior. Lake Champlain is bigger than Lake Michigan, while Lake Erie is depicted as tiny lake in northern New York.

The map also includes beautiful illustration of ships, whales, islands etc. The lower right quadrant of the map includes four views of New York, including the Empire State building and the Fifth Avenue Coach. Another charming illustration along the lower border depicts a view of the desert and wagons on the left and a city and cars on the right. The upper left quadrant includes amusing text.

First published in 1936 by the Columbia University Press, and later in 1937 for the Times Book Fair, this particular map, larger than the previous two versions and redone in color, was issued in 1939 and notes the New York World's Fair on 1939. Copyrighted by Daniel K. Wallingford, 452 West 144th Street, New York, N.Y.

Very good. Mounted on canvas, poster style. As with many examples of this map, the recto has been varnished producing an even toning.