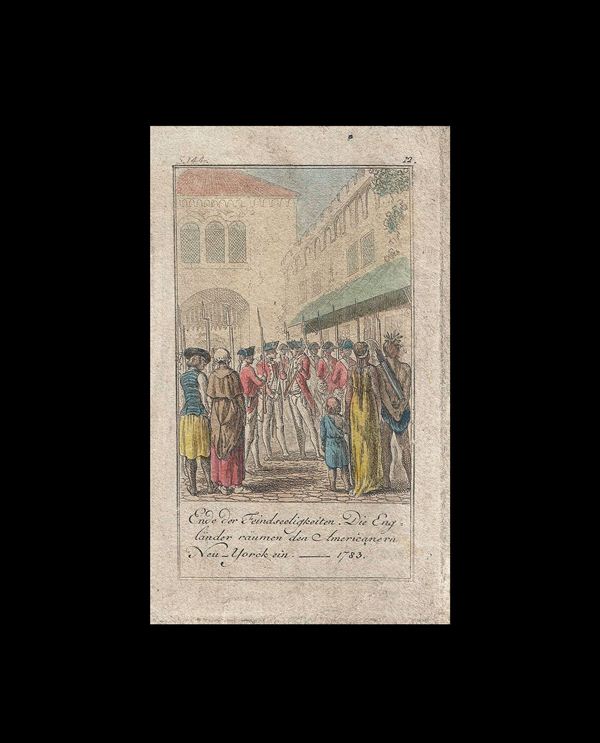 An extremely scarce 1783 Daniel N. Choloweicki trading card of the British evacuation of New York City at the end of the American Revolutionary War. This card size etched view was part of a series issued by Chodowiecki in Berlin in order to capitalize on German popular interest in the American Revolution. The view, no. 14 of the series, illustrates the events of November 25, 1783, commonly called 'evacuation Day,' when last British troops abandoned Manhattan. Choloweicki here recreates the scene wherein red coat officers gather while a man, woman, and American Indian family look on. This is also the day when the last shot of the American Revolution War was fired; the departing British ship fired its canon at jeering crowds on Staten Island. The shot never hit its target. The British departure was shortly followed by General Washington and Continental Army victorious entrance. All trading cards from the Choloweicki series are extremely scarce, almost never appearing on the market and present in only a few institutional collections. A rare opportunity.

Very good. Some wear due to aging. Original platemark visible.

Cresswell, D., `The American Revolution in Drawings and Prints, p. 125, no. 343. Boston Athenum, Prints and Photographs, AA B64N48 Hi.(no.1). Exhibited in: 'Creating the United States' at the Library of Congress, Washington, D.C., 2011.
Looking for a high-resolution scan of this?