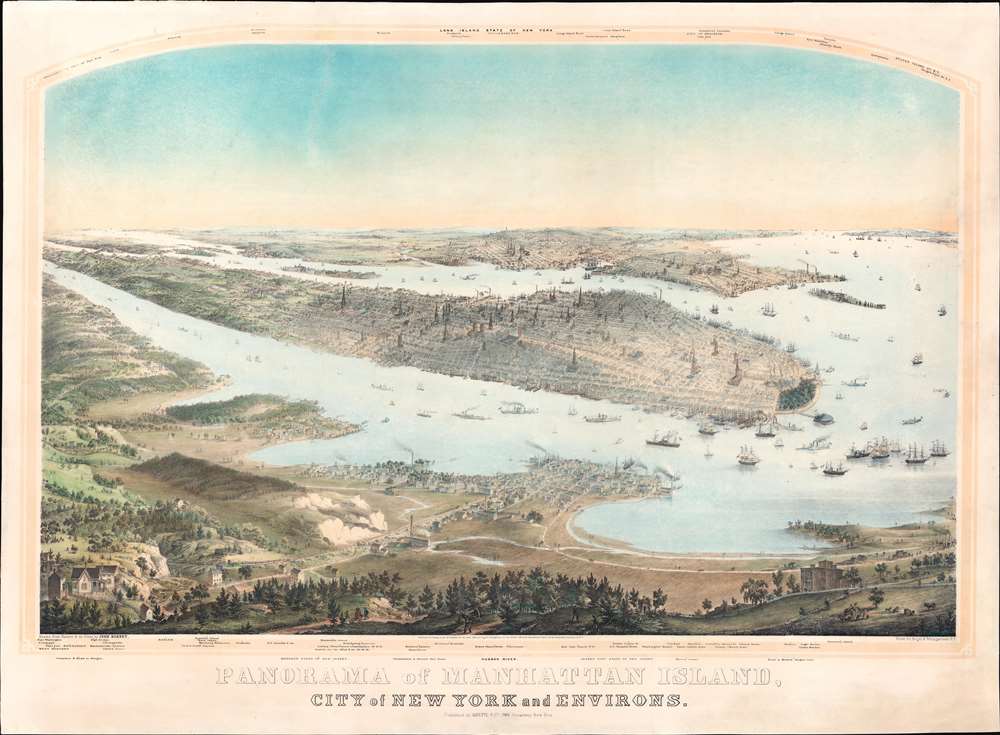 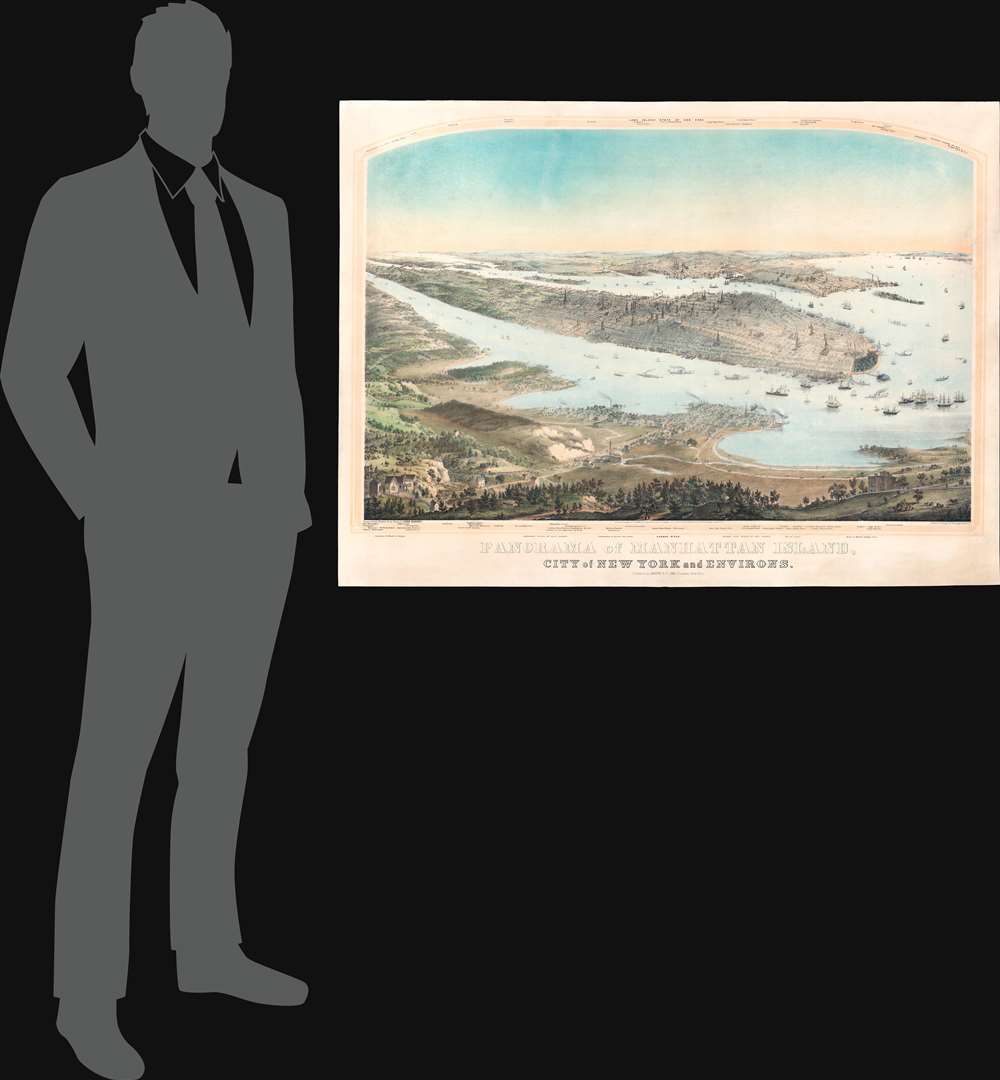 John Bornet presents a sweeping panoramic bird's-eye view of New York City on the cusp of its monumental expansion northwards in the second half of the 19th century. The view looks east on Manhattan, Queens, and Brooklyn from a high point to the west of Hoboken, New Jersey. Bornet purports to have drawn the view 'from nature', likely from Bergen Hill, New Jersey, a popular high point used by other viewmakers of the period.

The view contrasts a rural and pastoral foreground with the bustling metropolis of New York City, which itself fades to green north of today's 42nd street. Bornet plays with exaggerated vertical contrast to highlight New York's many soaring church steeples, as well as the Latting Observatory, then the tallest building in New York, and New York Crystal Palace in modern day Bryant Park, both constructed for the 1853 Exhibition of the Industry of All Nations. Ships of both sail and steam, fill the lower Hudson River and New York Harbor, and trains steam in and out of Hoboken - lending vibrance and motion to the image. Further north, in what would soon become Central Park, the Croton Receiving Reservoir, today's Great Lawn, is evident as are the buildings of Seneca Village, New York City's first African American community, just to the west.

Unlike most views of its time, the present view seems to delight in contrast, setting the pastoral foreground against the urban center, and the work of poor farmers next to sprawling gentlemanly estates, and residential communities against factories billowing smoke. Like all of Bornet's city views, this one has a curved upper boarder, adding dynamism to the overall print. The border work doubles as a frame for labeling important buildings and sites.

Although very tiny, this is one of the few, if not the only, contemporaneous view to illustrate the buildings of Seneca Village prior to their seizure by eminent domain in anticipation of the construction of Central Park. Seneca Village was located in today's Central Park just west of the Great Lawn, roughly between 82nd and 86th streets. The villagers primarily consisted of free people of color and poor Irish-American immigrants. Although the excoriating literature of the time describes Seneca Villagers as vagabonds and squatters, in fact most of the properties were legally transacted and owned outright by the residents. By 1855, within a year this view's publication, the lands were sized by the Central Park Commission and Seneca Village leveled to make way for Central Park. While the residents of Seneca Village were hardly the only community pushed out for the Park, they were perhaps the most powerless and marginalized.

This view is based on a painting by John Bornet. It was engraved and printed by the German-American lithographing firm of 'Nagel and Weingärtner' for 'Goupil and Company', a prestigious print and art gallery located at 366 Broadway. Examples are scarce. We are aware of 3 examples in private hands, in addition to one at the New York Public Library, and another at the Museum of the City of New York.

John Bornet (1810 - 1910) was a New York based landscape painter and lithographer active in the middle part of the 20th century. Bornet is best known for his New York City views, which range from bird's-eye perspectives to views of specific buildings. In America on Stone, (p. 100), Bornet is described as 'a very competent artist'. He appeared in New York directories between 1852 and 1856 and all of his existing work dates to this period. Little is known of his life beyond his work and after 1856 he appears in no records. We found only one record regarding his birth and death, suggesting he lived a prodigiously long life, uncommon at the time, but certainly possible. Learn More...


Louis Nagel (July 28, 1818 - August 10, 1870) was a German-American lithographer active in New York and San Francisco in the middle part of the 19th century. Nagel was born in Darmstadt, Germany. It is unclear when he emigrated to the United states, but he was active as a lithographer in New York as early as 1844. He exhibited the American Institute in both 1846 and 1847. He partnered with fellow Darmstadt-born lithographer Adam Weingärtner (1813 - 1883), creating the firm 'Nagel and Weingärtner'. Census records suggest he and his wife shared a residence with Weingärtner and his wife. The firm remained active until 1856, advertising as the only firm in New York to use the lithographic techniques developed by the Parisian Rose-Joseph Lemercier (1803 - 1887). This most likely refers to Lemercier's shading techniques. When the firm broke up, Nagel relocated to California, where he set up shop and continued to produce views and maps, at first independently (1858 - 1861), then in partnership with R. W. Fishbourne and Charles C. Kuchel (1862), then once again independently (1863 - 1865). He died in 1870. Learn More...


Adam Weingärtner (October 10, 1813 - August 3, 1883) was a German-American artist and lithographer active in New York in the middle part of the 19th century. Weingärtner was born in Darmstadt, Germany. He partnered with fellow Darmstadt-born lithographer Louis Nagel (1818 - 1870), creating the firm 'Nagel and Weingärtner'. Census records suggest he and his wife shared a residence with Weingärtner and his wife. The firm remained active until 1856, advertising as the only firm in New York to use the lithographic techniques developed by the Parisian Rose-Joseph Lemercier (1803 - 1887). This most likely refers to Lemercier's shading techniques. Weingärtner served in the American Civil War (1861 - 1865) with the 98th Pennsylvania Infantry. He naturalized as a U.S. Citizen in 1874. He died in Hoboken, New Jersey, in 1883. Learn More...


Jean-Baptiste Michel Adolphe Goupil (March 7, 1806 - May 9, 1893) was a French publisher and seller of art and prints during the 19th century. Born n Paris, he founded the company Goupil et Cie, which became one of the world's biggest art dealers during the 19th century. Goupil founded his first company in 1827 and then partnered with Henry Rittner (1802 - c. 1840), another Parisian print dealer, in 1829. Rittner disappears in 1840. Goupil found a new associate, Théodore Vibert (1816 - 1850), between 1841 and 1842 and the firm become Goupil, Vibert et Cie. Beginning in 1848, Goupil and Vibert embarked on an ambitious plan to create a worldwide network of associated dealers and opened branches in London and New York. Vibert died in 1850 and left several children, whom Goupil looked after. Starting in 1846, Goupil began to move away from dealing exclusively in prints and began buying and selling paintings. Over the next few decades, Goupil's firm became one of the largest art dealers in the world. Goupil, who lost two sons during his lifetime, slowly began to withdraw from working in 1884 and his associate Léon Boussod (1826 - 1896) took over the business in 1886 and renamed it 'Goupil et Cie - Boussod, Valadon et Cie successeurs'. The firm continued to operated until Vincent Imberti bought the company's archive in 1921. Learn More...