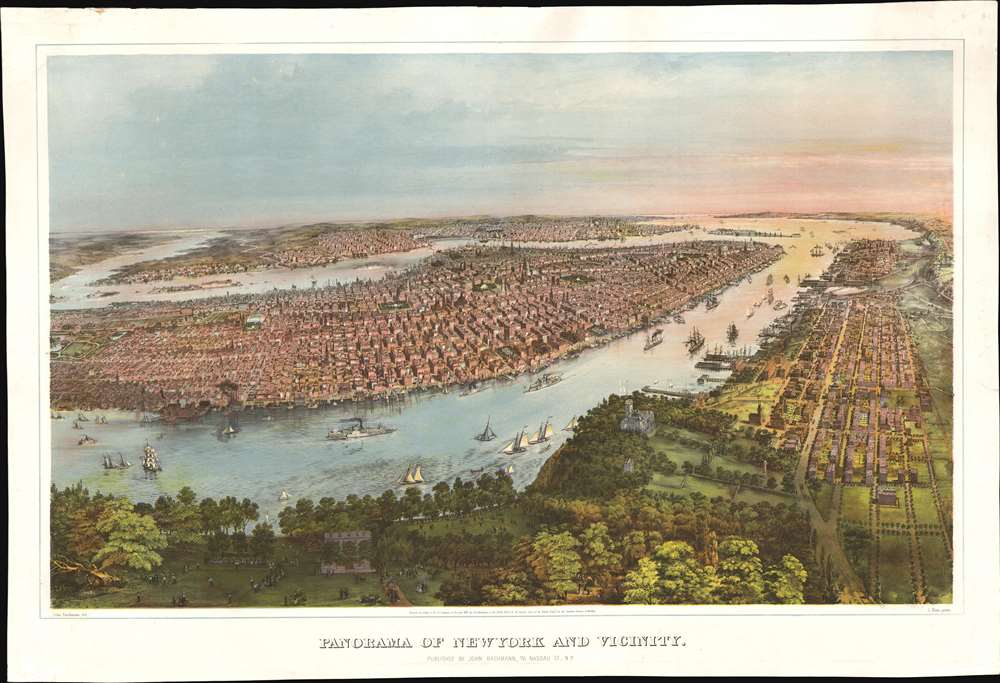 A rich and striking large-format 1866 John Bachmann panoramic three-color chromolithograph view of New York City as seen from a point high over the Elysian Fields (baseball) of Hoboken. The view is expansive and utilizes an unusual fish-eye perspective. It looks on Manhattan from the west, with the area of focus roughly corresponding to 32nd Street. Coverage extends north to Central Park, south to Sandy Hook, and east to include parts of Brooklyn and Queens. Manhattan's major parks are recognizable, including Madison Square, Gramercy, Washington Square, City Hall, and the still under construction Central Park. Vast swathes of lotted but undeveloped land are evident along Park Avenue north of Bryant Park. Along the Hudson, there are also a number of large gentlemanly estates - survivors of a bygone era that would soon disappear entirely. The Hudson River is busy with an assortment of sail and steamships. On the right side of the map, Hoboken and beyond, Jersey City, are evident. In the foreground there is a prominent display of the Elysian Fields, where two different baseball games are in progress.

Baseball in the Elysian Fields

This view is most famous for its early depiction of baseball being played in the Elysian Fields. The Elysian Fields were a public recreation area on Hoboken's northern riverfront that stretched roughly from present day 9th to 12th Streets and from Washington Street to the Hudson River. The fields were long used for cricket, boxing matches, and other sports, but became famous in 1845 as the site of the first organized Baseball game. The game became increasingly popular in the subsequent decades. The present view illustrates two different games, each being played in a different style. The most prominent game, appearing to the left of the large building known as the Colonnade, represents the 'Massachusetts Game' an increasingly uncommon variant of baseball wherein the batter played between fourth and first base. A second game, to the right of the Colonnade at the famous 'Magnolia Ball Club', represents the 'New York Game', which is the variant of baseball played today. Curiously, 'Magnolia Ball Club' field would later become the site of the Maxwell House Coffee Plant.

This is one of the earliest examples of what we call the 'fisheye' perspective - one of Bachmann's many view-making innovations. The technique, which involves multiple distorted perspectives, emerged as a way to illustrate large horizontal expanses in greater detail. The result curves what would otherwise be straight lines - such as the western line of Manhattan. We have seen similar conventions used, for example, to illustrate California's long coastline. Another benefit of the 'fisheye' perspective is that it forces the viewer to focus attention on a particular designated area. In this case, the transition is significant. Most earlier views, including Bachmann's own previous work, tend to focus on the southern tip of Manhattan - because at the time, most development was centered on lower Manhattan. That changed in the 1860s, as major urbanization projects, including the construction of Park Avenue, Central Park, and the leveling of the Upper West Side Plateau, refocused the center of New York social life towards what is today Midtown and Uptown.

The present example represents the first edition of this important view, drawn and published by John Bachman and lithographed by Julius Bien. A second edition, wherein the title is integrated into the sky, was issued in 1868 by' P.S. Duval, Son and Co.', and published by John Weik. We are also aware of one-color variants, also issued in 1866. The view is rare. Variants are held in several institutions, including the New York Public Library (uncolored) and the Metropolitan Museum of Art (3 color chromo, as here). There is also an example at the Baseball Hall of Fame in Cooperstown, NY. An example formerly owned by the Downtown Athletic Club is the last known to appear on the market.

John Bachmann (1816 - May 22, 1899) was a Swiss-American landscape artist and viewmaker active in New York from the mid to late 19th century. Bachmann was born in Switzerland and apprenticed as a lithographer both in Switzerland and Paris until 1847. Like many Swiss and German printmakers, Bachmann was a Forty-Eighter, one of thousands who fled to the United States in the aftermath of the failed 'Springtime of the Peoples Revolutions of 1848'. He settled in Jersey City or Hoboken. His first publication, a spectacular view of New York City looking south from Union Square, appeared 1849. Although not the most prolific viewmaker, Bachmann is considered among the finest. He issued more than 50 views, two-thirds of which were of New York City. Bachman had a passion for New York and it's many civic advances and, unlike other viewmakers, some of his most interesting work of his work focused on these, including views of Greenwood Cemetery, Central Park, and Hoboken's Elysian Fields. He also has the distinction to be the first to use the term 'Bird's-eye' to describe his aerial-perspective views. During the American Civil War (1861 - 1865) he issued a series of innovative 'Seat of War' views illustrating the progress of the war in various theaters. These war views were revolutionary in their advanced use of perspective and orientation, to illustrate terrain and topography. His last known perspective view illustrated Havana. Bachmann's son, John Bachmann Jr. (1853 - 1927) (aka. Bachman) was also a lithographer. Learn More...