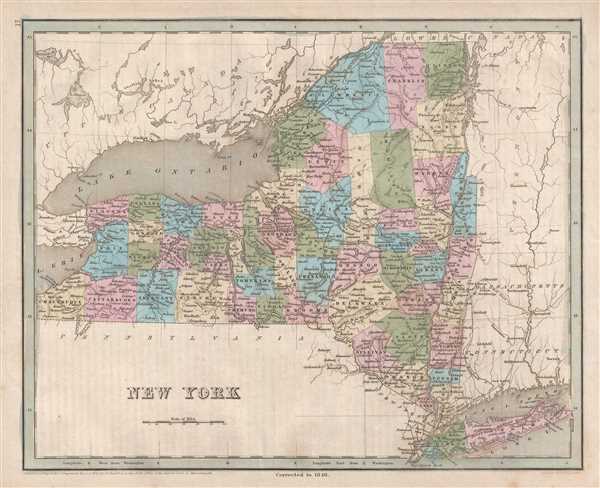 Illustrates the Erie Canal, the Long Island Railroad, and the New York and Harlem Railroad - one of the first railroads in the United States.
$250.00

This is an 1846 Thomas G. Bradford map of New York. The map depicts the region from Lake Erie and Ontario, Canada to Vermont and from Canada to Pennsylvania and New Jersey. As is prevalent among many maps from Bradford's A Universal Illustrated Atlas, the transportation network in New York is prominently featured, especially the network of canals and the newly-constructed railroads.

The centerpiece of transportation in New York during this time in American history was the Erie Canal. Completed in 1825, the Canal connected the Hudson River at Albany to Lake Erie and Buffalo. At the time, the Erie Canal was the longest canal in the world. Upon its completion, goods could be transported by water from New York City to Chicago, a much less hazardous and time-consuming voyage than overland treks. Numerous other canals are illustrated, although they are not labeled. These include the Erie and Champlain Canal which connected the Erie Canal with Lake Champlain at Whitehall, the Oswego Canal between Syracuse and Oswego, the Chenango Canal between the Erie Canal at Utica to Binghampton, and several others. The construction of this extensive canal system led officials in New York to try and protect their investment by seriously restricting the construction of railroads within the state. In doing so, that would, theoretically, guarantee that the transport of goods would be carried out using the canals.

A handful of railroads, however, were constructed, such as the Long Island Railroad (illustrated here in red) and the lines that would become the New York, New Haven, and Hartford Railroad. The New York and Harlem Railroad (now Metro-North's Harlem Line), one of the first railroads in the United States, is also illustrated. Incorporated in 1831, the first section of track, along Bowery from Prince Street to 14th Street, opened in 1832.

Highly detailed, each county is illustrated, labeled, and shaded a different color to allow for easy differentiation. Numerous cities and towns are labeled, including New York, Brooklyn, Albany, Syracuse, and Buffalo. Myriad rivers and lakes are depicted and labeled throughout the state as well.