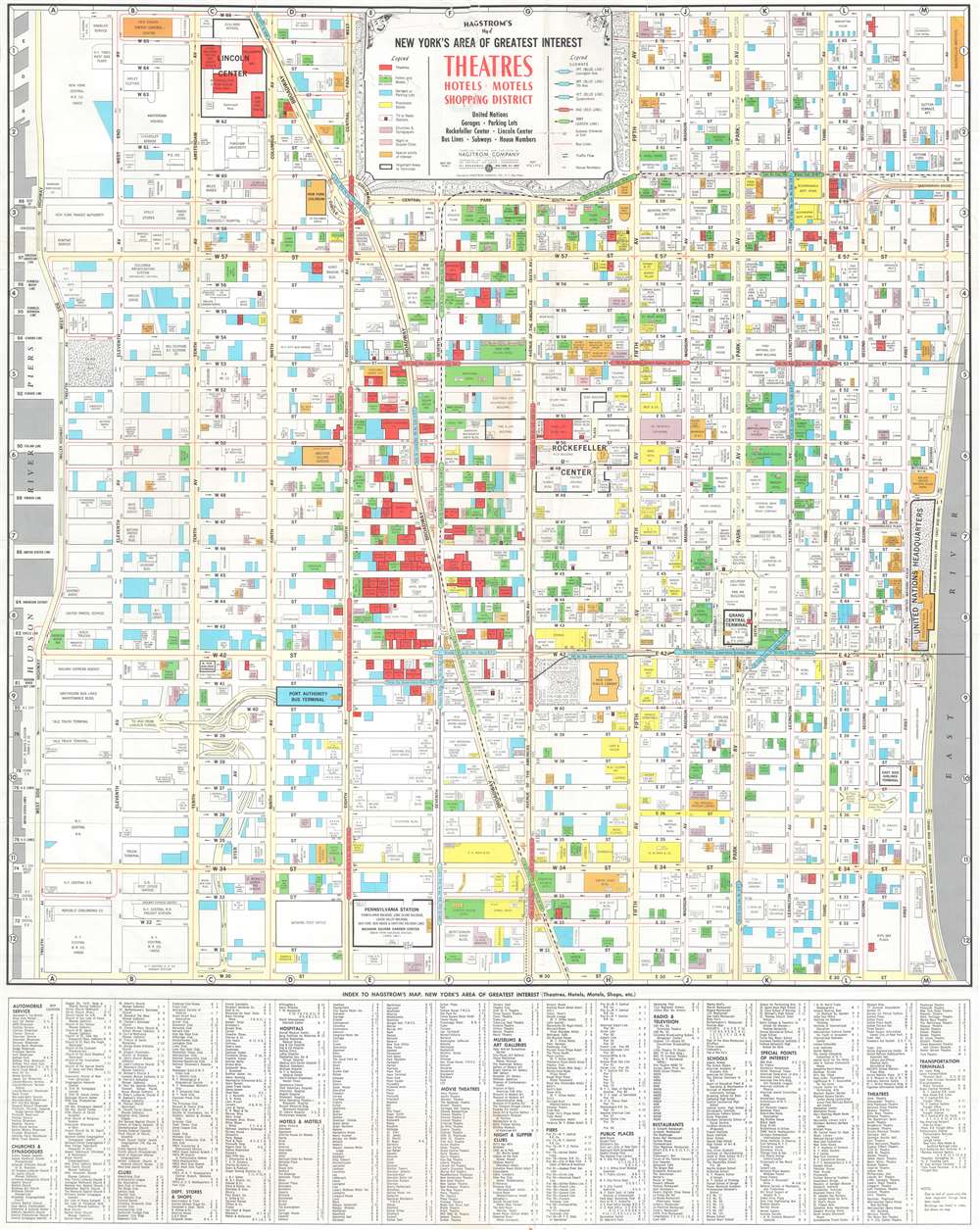 This is a c. 1966 Hagstrom map of Midtown Manhattan highlighting the Theatre District and its many theatres. The map depicts the city from the West Side Highway and the Hudson River Piers to the East River and from West 66th Street, Central Park, and East 66th Street to 30th Street. Although myriad buildings are illustrated, not all the city blocks are filled. Theatres, hotels and motels, garages or parking lots, prominent stores, tv or radio stations, churches and synagogues, night or supper clubs, and special points of interest are shaded using various colors to allow for easy differentiation and identification.

The focus, of course, is on the areas many theatres, which are shaded red. Numerous theatres still in operation today are labeled here, including the New Amsterdam, Lyric, Majestic, Broadhurst, Booth, Golden, Barrymore, and the Music Box. Lincoln Center, where the Metropolitan Opera House would open the following year, appears in the upper left quadrant. Numerous others illustrated here have since been closed or repurposed. The United Nations Headquarters, located along the East River between East 42nd Street and East 48th Street, is illustrated and the Secretariat Building, the Meeting Halls, and the Assembly Hall are all labeled. Other New York City landmarks that fall within the map's borders include the Empire State Building, the central branch of the New York Public Library, the Museum of Modern Art (MoMA), Bryant Park, Grand Central Station, and Herald Square. Both Macy's and Bloomingdale's are labeled, as are the Waldorf Astoria Hotel and the Plaza Hotel. An index, situated along the bottom of the map, lists the identified locations and each building's location on the map's grid. Streets and avenues are also labeled and subway lines are illustrated and identified as well.

This map was created by the Hagstrom Company and published c. 1966. We have identified at least three different editions of this map that were published between c. 1940 and c. 1966. Each of these editions vary in rarity.

Good. Exhibits light wear along original fold lines. Exhibits closed tears, reinforced weak areas, and other wear where once attached to a binder. Closed tear extending two-and-three-quarters (2.75) inches into printed area from top margin professionally repaired on verso.
Looking for a high-resolution scan of this?