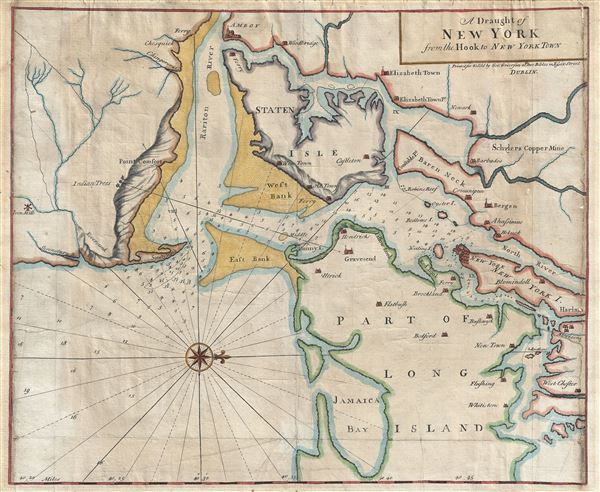 Grierson's was well-known for issuing piracies of English maps, most particularly those of his contemporary Herman Moll. He also issued a pirated edition of Mount and Page's English Pilot, from which this was extracted. The cartography for this map is actually the work of Mark Tiddeman, who first issued it in the 1732 first edition of the English Pilot. The map's parent publication, book four of the English Pilot, was one of the most influential collections of nautical charts ever published. Form the first printing in 1732, the English Pilot appeared in some 37 editions over the next century, remaining popular even after much of its contents became outdated and better charts, such as those contained within Sayer and Bennett's North American Pilot and Des Barres' Atlantic Neptune became available.

This chart is impressive for its inaccuracy and rather vague rendering of the region, which its itself indicative of the relatively limited hydrographic knowledge of the region in the early and middle parts of the 18th century. Augustyn and Cohen, in Manhattan in Maps, note that Tiddeman's map was better than most of its contemporaries, however, ' makes the entrance to the Lower Bay of New York Harbor appear to be less of a challenge than it really is.' The entrance to New York Harbor was, in fact, quite challenging due to the narrow entrance between Sandy Hook and East Bank and required critical sharp turn to starboard in order to alight in New York Harbor. Until truly accurate nautical charts appeared in the early days of the U.S. Coast Survey and the entrance was widened in the 1890s, shipwrecks in this area were common - it is not inconceivable that this popular chart may have been partially responsible for at least some of them.

This Grierson pirate of Tiddeman's map is based exclusively on the 1732 first state of Tiddeman's map which, despite being a new engraving plate, is very similar with the exception being Grierson Dublin imprint in the upper right quadrant just under the title. The 1732 edition of Tiddeman's map does not specifically identify the author. Curiously, the second edition of Tiddeman's map, published in 1753 following the 1749 release of Grierson's pirate (as offered here), does credit Tiddeman just under the title. Presumably Tiddeman, aware of the Grierson piracy, was attempting to identify and claim his map. Grierson's son, Boulter Grierson, also published a reissue of the 1749 piracy of the English Pilot in 1767. Due to a significantly smaller print run and only two editions being issued, Grierson's piracies are far less common than Tiddeman's originals and are consequently highly sought after by collectors.

Mark Tiddeman (fl. c. 1724 - c. 1760) was a British navigator, surveyor, chartmaker, and hydrographer active in the early 18th century. Tiddeman was sailing master of the English ship Tartar. From 1724 to 1728 he completed a hydrographic survey of New York Harbor and the mouth of the Chesapeake. These surveys were eventually adopted by Mount and Page for inclusion in the 1732 fourth book of the English Pilot. On returning to England Tiddeman completed several surveys of the Highlands of Scotland for Admiral Wagner, who was then stationed on the Coast of Scotland. On March 27th of 1741 he was commissioned as a Lieutenant in the Royal Navy. He later became a Captain and piloted several ships to and from the British West Indies. Learn More...


George Grierson (1680 - October 27, 1753) was an Irish printer and publisher active in Dublin during the first part of the 18th century. Grierson began publishing when he married Jane Blow, a daughter of the prominent Irish paper making and publishing family of James Blow. In 1727, he was admitted as a Freeman to the city of Dublin and was appointed to the office of Printer General to His Majesty in Ireland. Operating under the title, 'Kings Printer in Dublin' from 1732 to 1753, Grierson was the only printer in Dublin allowed to print Holy Bibles. Later Grierson's attention turned toward cartography, which he identified as a profitable sideline to Bible work. Most of Grierson's cartographic work involved pirating the work of the prominent English eccentric and map publisher Herman Moll. Grierson's first 'Moll' piracies were published shortly following Moll's death in 1732. Though superficially identical to the maps in Moll's The World Describ'd, Grierson's maps are in fact complete re-engravings, often with new cartouche work bearing unique ‘Irishcentric' dedications and themes. Grierson also issued piracies of The English Pilot and Salmon's Modern History. Although George Grierson can be credited with few original maps, his work established Dublin as a center for cartographic engraving and publication in the 18th century. Today's Grierson's Irish versions of Moll's maps are far rarer than Moll's own work and are highly sought after by collectors. Following his 1753 death George Grierson's son, Boulter Grierson, took over the business, beginning a family printing dynasty that would last well into the 19th century. Grierson's offices were located at the 'Sign of the Two Bibles and King's Arms', Essex Street, Dublin. Learn More...