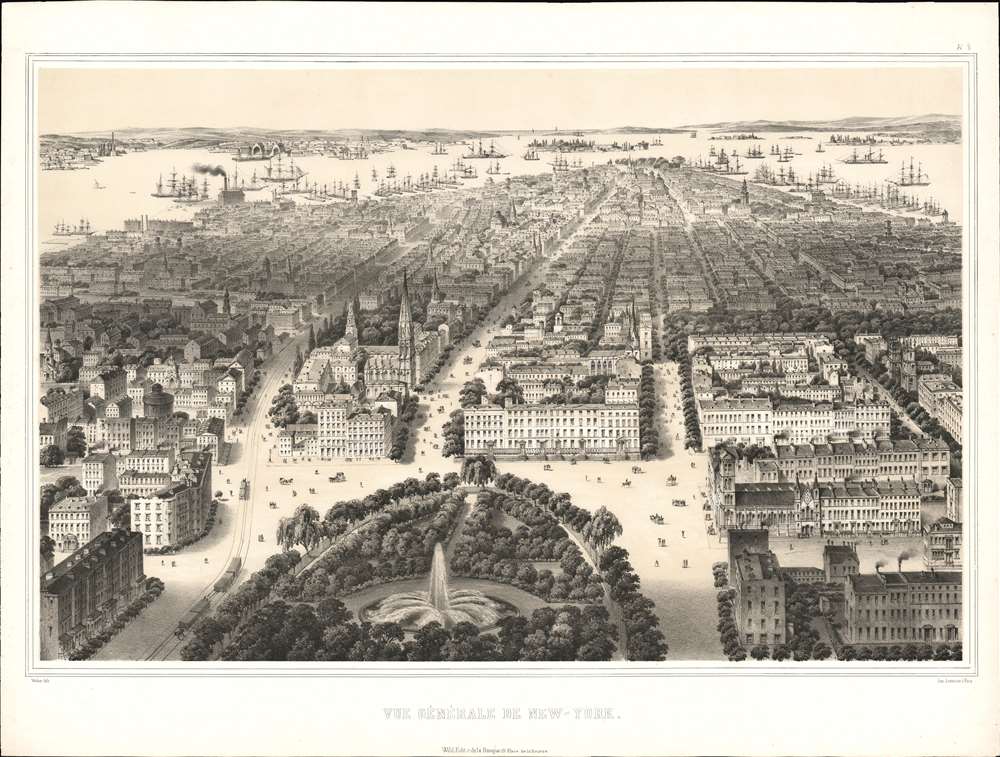 New York emerges as the equal of London or Paris!

This is a spectacular 2-color chromolithograph bird's-eye view of New York City by C. Wild, H. Walter, and Lemercier. The work represents New York as it attempted to establish itself as a premier global metropolis, comparable to London and Paris. The view looks south towards New York Harbor from a fictional high-point above Union Square (14th - 18th Sts.). The city's primary arteries, Broadway, University Place, and 4th Avenue are exaggerated in their width, giving them the aspect of broad Parisian-style boulevards. The foreground is occupied by Union Square itself, with its dramatic fountain, surrounded by impressive European style architecture.

Union Square, as good as London or Paris?

When this view and the related view by Bachman were issued, the area around Union Square represented a fashionable, exclusive enclave, the crème de la crème of New York real estate. Union Square was the grandest park in the city. Its monumental fountain, hailed by some as unequaled anywhere on Earth, celebrated not only its own beauty, but the ample fresh water supported by the newly completed Croton Aqueduct. Horse-drawn trams, the beginnings of the Harlem Railroad, run up and down Fourth Avenue, offering quick access to the Battery, harbor, and business districts.

The developer of Gramercy Park, Samuel Bulkley Ruggles (1799 - 1881), owned most of the real-estate around Union Square. In addition to constructing his own impressive 4-story mansion on Union Square East, Ruggles leased and developed other properties around the square for the monied elite. The majesty of the area is apparent in this engraving. Wild, the lithographic engraver, employs a clever technique to highlight Union Square and the surrounded properties - practically bathing them in light. This is a two-color lithograph, black content on cream background. The cream color is reduced around the park and surrounding facades, allowing the stark white paper to show through, brilliantly highlighting this newly developed part of New York. The density of ships in the harbor and at dock also differ.

This spectacular view is inspired by a very similar view of New York issued in 1849 by John Bachmann. That view was Bachmann's first American bird’s-eye view, as well as the first full-scale bird’s-eye perspective view of New York. Here Walter, Wild, and Lemercier have narrowed the east-west scope of the view, thus focusing more on Union Square and exaggerating the apparent length of New York. Some of the harbor buildings in Brooklyn, including large grain warehouses, are also drawn larger than life. The two-tone highlighting technique, mentioned above, is also a unique innovation evident only on the Lemercier edition.

This view was engraved on stone in Paris by 'H. Walter', printed by Lemercier et Cie., and published by 'C. Wild'. Stylistically it is drawn from the work of John Bachmann in New York, but is a completely separate engraving. There were several different states. The present example, a 2-color chromolithograph, with the title 'Vue General de New-York'. A four-color chromolithograph also exists with the subtitle 'Prise de l'Union Square'. Rare to the market.

Rose-Joseph Lemercier (June 29, 1803 - 1887) was a French photographer, lithographer, and printer. One of the most important Parisian lithographers of the 19th century, Lemercier was born in Paris into a family of seventeen children. His father was a basket maker, and he even began working as a basket maker at the age of fifteen, but Lemercier was drawn to lithography and printing and soon entered into an apprenticeship with Langlumé, where he worked from 1822 until 1825. After working for a handful of other printers, Lemercier started his own firm in 1828 at 2, rue Pierre Sarrazin with only one printing press. He subsequently moved a few more times before arriving at 57, rue de Seine, where he founded the printing firm Lemercier and Company. Lemercier created the firm Lemercier, Bénard and Company in 1837 with Jean François Bénard. Lemercier bought out Bénard's share in the firm in 1843 and, since his two sons died at a young age, he decided to bring his nephew Alfred into the business beginning in 1862, who would progressively take on more and more responsibility in running the firm. Between 1850 and 1870, Lemercier's firm was the largest lithographic company in Paris. The firm began to decline in prestige in the early 1870s, and, after Lemercier's death in 1887, its descent only quickened. It is unclear when the firm closed, but Alfred directed the firm until his death in 1901. Learn More...


Walter (fl. c. 1840 - 1866) was a French lithographer engraver active in Paris during the middle part of the 19th century. The name 'Walter Lith' appears on a wide variety of French prints and views. Some are signed Edouard Walter, others Charles Walter, and still others H. Walter, leading us to believe the firm represents a family enterprise. All 'Walter Lith' prints appear to be associated with the firm of Lemercier et Cie. Learn More...