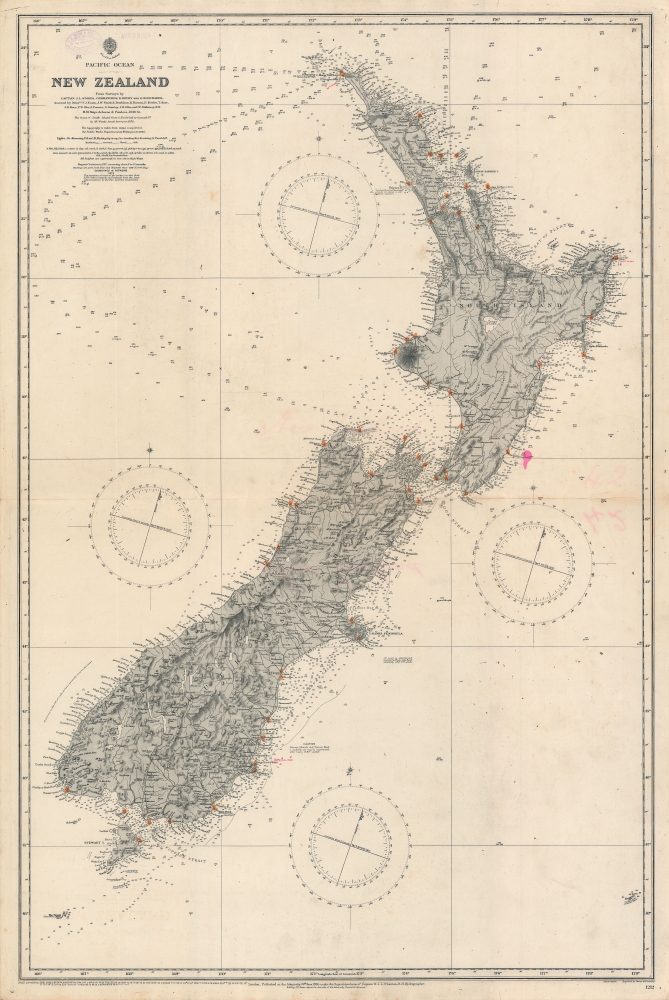 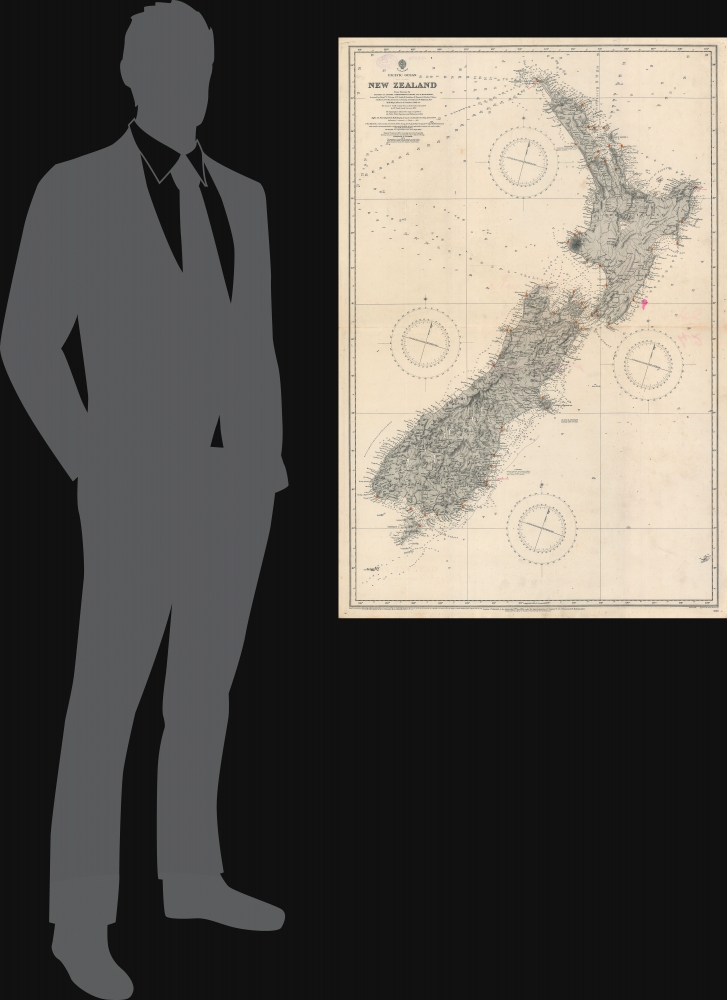 A rare 1917 British Admiralty nautical chart or maritime map of New Zealand. The map covers both North and South Islands and the surrounding waters. While depth soundings along the coastlines are extensive, soundings further out are few and far between. Lighthouses throughout are marked using the standard red and yellow convention. This map is based upon surveys completed by J. L. Stokes, one of the premier British hydrographers of his generation. Inland detail is derived from surveys completed by the Wellington Public Works Department, c. 1885.

There are several interesting annotations in pink associated with lighthouses - for example the Otago Harbor Light has been revised. Where it was initially 'red', here it has been revised to 'Gb Fl (2) ev. 10-Sec.' This roughly translates to 'Flood Light, 2. -10 second evolutions.' With lighthouses so coded, it is possible for mariners to know where they are by studying the lights from far out at sea.

This map was published by the British Admiralty in 1917. It was engraved and printed by Davies and Company, London. The map was first issued in 1885 and numerous updates followed well into the mid-20th century. The present example has update and revisions to 1917. We have not found another example of this state, but the National Maritime Museum and the National Library of New Zealand both have multiple alternate editions. Scarce to the market.


Davies and Company (fl. c. 1880 - 1930) was an engraving and lithography firm active in London during the late 19th century. The firm engraved nautical charts for the British Admiralty Hydrographic offices in the 1880s to the early 1920s. The firm may be the successor of Davies, Bryer, and Company (fl. 1866 - 1872), who also worked with the Admiralty, which dissolved in 1872. It may also be related to the firm of Robert Davies, Maddock, and Company, which was dissolved in 1905. Their imprint, as Davies and Company, appears as early as 1880 and as late as the 1920s, but the firm may have closed its doors by that point and the imprints persist on map plates only as a legacy. Learn More...


John Lort Stokes (August 1, 1811 – June 11, 1885) was a British Royal Navy officer, explorer, and hydrographer. Stokes grew up in Scotchwell near Haverfordwest, Pembrokeshire. He joined the Royal Navy on September 20, 1824. Stokes is famous as the commander of the HMS Beagle. He was assigned to the Beagle in 1824, acquiring the rank of midshipman in 1825, mate and surveyor in 1831, lieutenant in 1837, and commander in 1841. He remained with the HMS Beaglefor a total of 18 years, including during this historic 1833-1836 voyage of naturalist Charles Darwin, with whom he shared a cabin. Following the Darwin voyages in South America, the HMS Beagle was reassigned to Australia, where it carried out survey of the Australia coast. It was during this period that Stokes succeeded John Wickham as commander of the HMS Beagle. He was later given command of the HMS Acheron, with which he continued his survey of the Australian coastline. Stokes's delighted in exploration and his contribution to Australian cartography was significant, and includes the discovery of the Victory River, Port Darwin, the Flinders Rivers, and the Albert Rivers. He was speared by Aboriginals in 1839, but had full recovered by 1840. Stokes produced a several detailed charts of the Australian coast that, due to their accuracy, were still use nearly 100 years later. He retired from active duty in 1877, settling on his family estate in Scotchwell, Pembrokeshire, Wales. Learn More...