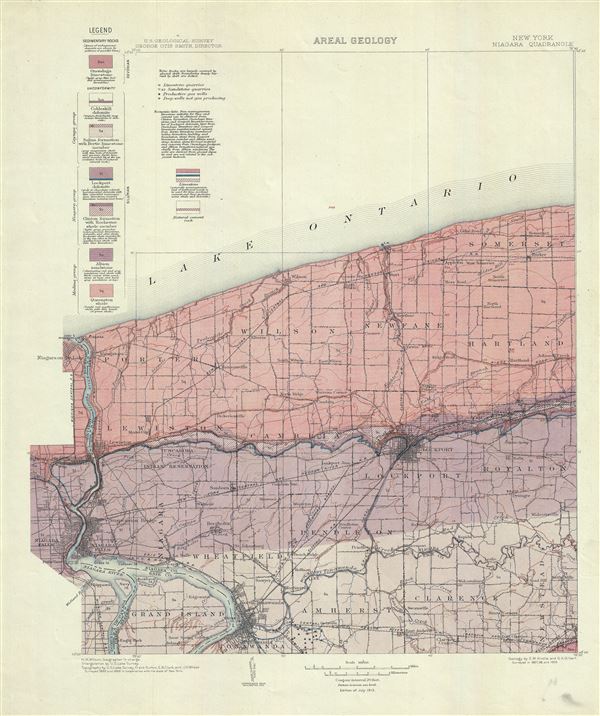 This is a fine 1913 U.S. Geological Survey map depicting the areal geology of the Niagara County (including the Niagara River and the Niagara Falls), New York. The map shows the distribution of the different types of rocks or geological formations of the region, covering from Lake Ontario to Tonawanda and from Niagara Falls in Ontario, Canada and the Niagara River east as far as Newstead. The map notes several towns, rivers, railroads, roads, buildings, bridges, and a host of additional features. A legend is included in the top left quadrant of the map. This map is based on geology survey conducted by E.M. Kindle and G. K. Gilbert in 1897, 98 and 1909. Topography is by U.S. Lake Survey, Frank Sutton, E. B. Clark and J. H. Wheat surveyed in 1893 and 1896 in cooperation with the state of New York, with triangulation by U.S. Land Survey under the supervision of H.M. Wilson, Geographer in charge. Issued in 1913 by the U.S. Geological Survey with George Otis Smith, Director, as part of Geological Atlas of the United States, Niagara Folio, New York, by E.M. Kindle and Frank. B. Taylor.