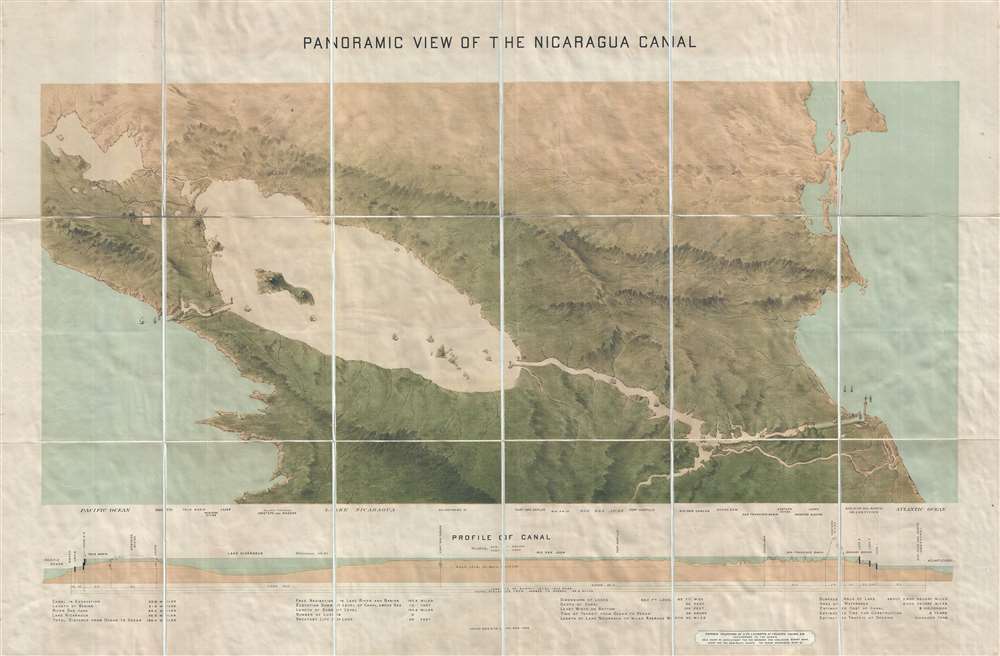 A canal that never was but still may be! Proposed alternate to the Panama Canal through Nicaragua.
$2,000.00

A rare and fascinating c. 1899 chromolithograph view of the proposed Nicaragua Canal by Julius Bien. The development of an intercontinental canal connecting the Caribbean (and therefore the Atlantic) with the Pacific in Central America was one of the major engineering goals of the late 19th and early 20th centuries. While the French were focusing on the Panama Canal, Americans were looking to Nicaragua. As early as 1899, United States Navy Bureau of Navigation Captain A. S. Crownshield visited the region and published a defense of the Nicaragua Route as the only reasonable intercontinental. It was perhaps general interest spurred by Crownshild's article that inspired Bien to create this view.

Beginning on the Caribbean Sea not far from the modern-day Nicaragua / Costa Rica border, the route would proceed inland through a series of locks and an excavated channel to the San Juan River, from which it would proceed to Lake Nicaragua (Cocibolca) near San Carlos. Lake Nicaragua, is a massive inland lake covering nearly half of the width of the isthmus. From Lake Nicaragua, another excavated channel and more locks would lower ships some 45 feet toe San Juan del Sur and the Pacific. The presentation of the map makes the route seem exceptionally practical and vastly easier to construct than competing efforts further south in Panama.

Nonetheless, a number of factors worked against the Nicaragua Route. The Panama Canal was already under construction and, despite its own problems, attracted a great deal of investment. Moreover, lobbyists in the United States warned of Nicaragua's earthquake prone landscape, heavy rainfall, and political instability. Just as investors seemed to be lining up, in spring of 1902, the volcano Momotombo, conveniently located just beyond the scope of this view, erupted, leading investors to turn their attentions to the more geologically stable Panama. Nonetheless, efforts continue to this day to complete a Nicaragua Canal and construction is currently underway by the Hong Kong Nicaragua Canal Development Investment Company (HKND Group).

Cartographically Bien's view extends from Lago Xolotlán to the modern-day Nicaragua / Costa Rica border, and from the Pacific Ocean to the Caribbean Sea. It includes all of Lake Nicaragua, as Lago Xolotlán and the capital of Managua. Cities are shows, but few are named save along the bottom of the amp. Also along the bottom of the map there is an elevation profile of the canal, as well as additional statistics, intended to illustrate the practicality of the route.
B

Julius (Julien) Bien (September 27, 1826 - December 21, 1909) was a German-Jewish lithographer and engraver based in New York City. Bien was born in Naumburg, Germany. He was educated at the Academy of Fine Arts, Cassell and at Städel's Institute, Frankfurt-am-Main. Following the suppression of the anti-autocratic German Revolutions of 1848, Bien, who participated in the pan-German movement, found himself out of favor in his home country and joined the mass German immigration to the United States. Bien can be found in New York as early as 1849. He established the New York Lithographing, Engraving & Printing Company in New York that focused on the emergent chromo-lithograph process - a method of printing color using lithographic plates. His work drew the attention of the U.S. Government Printing Office which contracted him to produce countless government maps and surveys, including the Pacific Railroad Surveys, the census, numerous coast surveys, and various maps relating to the American Civil War. Bien also issued several atlases both privately and in conjunction with a relation, Joseph Bien. At the height of his career Bien was elected president of the American Lithographers Association. After his death in 1909, Bien's firm was taken over by his son who promptly ran it into insolvency. The firm was sold to Sheldon Franklin, who, as part of the deal, retained the right to publish under the Julius Bien imprint. In addition to his work as a printer, Bien was active in the New York German Jewish community. He was director of the New York Hebrew Technical Institute, the New York Hebrew Orphan Asylum, and president of the B'nai B'rith Order. Learn More...