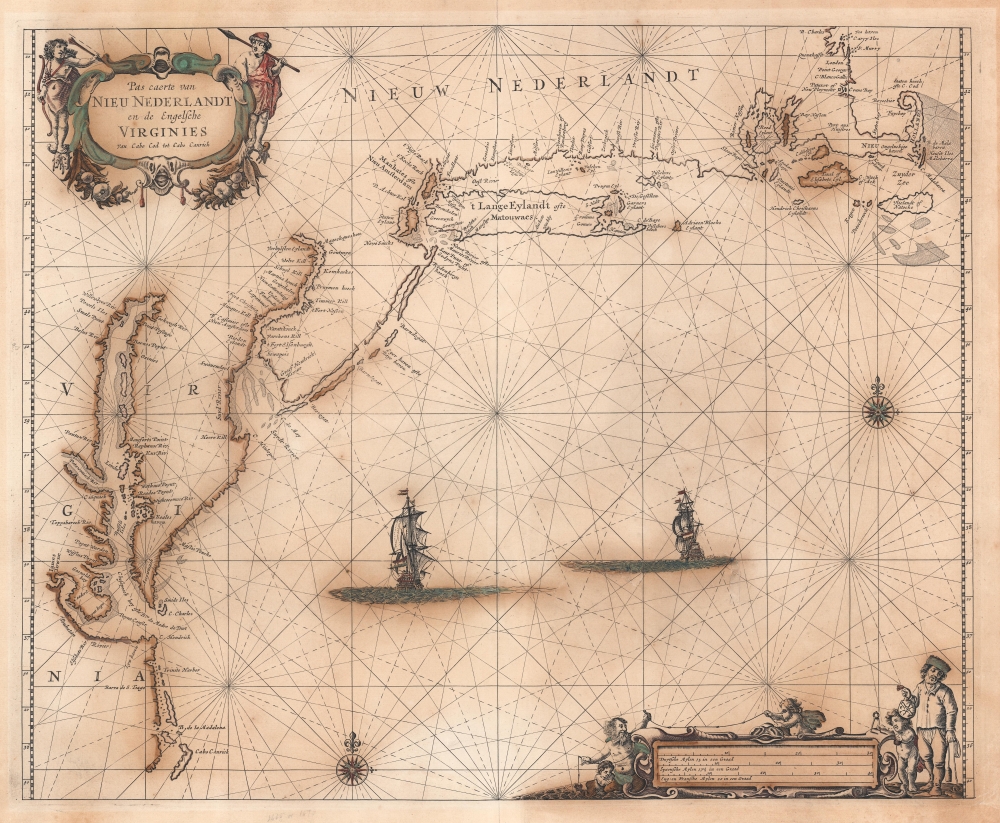 Much of the cartography is derived from the 1661 Joannes van Loon chart of the same region, but with numerous updates and revisions. Note the charming curl of Cape Cod, the misshapen forms of both Nantucket and Martha's Vineyard, the malformed Long Island revealing the era's confusion regarding the North Fork. Both 'Adriaen Blocks Island' (Block Island) and Garners Eylant (Gardiner's Island) are shown and named. Although Boston Bay and the River Charles are present, Boston itself is not named on the map - although Plymouth just to the south is. New York City, by 1666 firmly in English hands and reincorporated in 1665 as 'New York', here retains the Dutch nomenclature, 'Niew Amsterdam', reflecting Dutch opinions on the matter. Along the Connecticut coast, a host of new English settlements are noted, including Gilfort, Stamfort, Stratfort, Milfort, etc. On the Delaware River, both the Dutch Fort Casimier and the Swedish Fort Christina are noted. Philadelphia, not founded until 1682, is not present. The Chesapeake Bay is prominent with considerable efforts to define major river connections, particularly the Potomac (Patawonieck) and James Rivers. Jamestown is noted.

This map was engraved in Amsterdam and published in 1666 by Pieter Goos. Cartographically it reflects the 1661 map of Joannes van Loon. Being one of the better nautical charts of the region, it had a long life, appearing in atlases until about 1692. The present example appeared in Goos' De Zee-Atlas oste Water-Weerld. Nonetheless, there is only one state, with no major or minor updates during its long print run. Moreover, despite a long run on the market, the map is today quite rare. We note some 6 examples of the original 1666 map in the OCLC, although the atlas is well represented, particularly in European collections.

Good. Map exhibits highly oxidized old color - which both gives the map an old world charm and makes it extremely brittle where the color is most heavy, leading to cracking in places. The whole has consequently been stabilized on archival tissue.