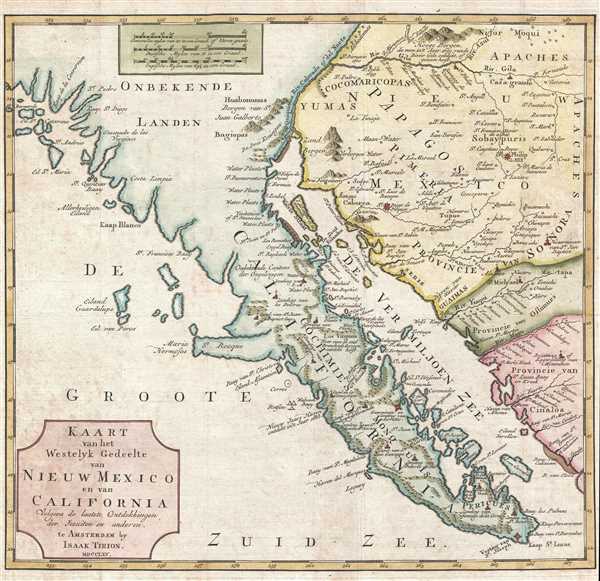 Labels numerous cities, towns, and missions throughout the region.

A scarce and important 1765 map detailing the Spanish/Mexican borderlands in the California-New Mexico (including modern-day Arizona) region. Despite its title, this map does not cover New Mexico, instead, it focuses on the Gulf of California, Baja California, parts of Southern California (including San Diego), and modern-day Arizona. Tirion denotes towns, indigenous villages, missions, fortifications, and some offshore detail, with mountain ranges rendered in profile.

Cartographically this map falls between the seminal mapping of Father Kino, which reattached insular California to the mainland, and the important discoveries of the Miera-Escalante Expedition. Tiron's work is a significant advancement over Kino's 1705 map, with significant new data derived from Jesuit missions and explorations throughout the region. On this map, the various Jesuit settlements are identified as little churches. These are particularly notable on the Baja Peninsula and on the Mexican mainland. Of note is the site of Casa Grande, on the River Gila. Though marked here as a mission, Casa Grande is in fact an indigenous American Indian ruin of incredible size and complexity. It was Kino who identified it as 'Casa Grande,' citing its architectural enormity. Casa Grande was not visited again until Lt. Col. Juan Bautista de Anza's expedition in 1775. Today it is protected by the National Park Service. Other sites of note include St. Diego de Pitquin, St. Philip de JHS, and, along the Colorado River, St. Dionysio, St. Pablo, St. Philip, and others. In California, the Bay of San Diego is noted, as are the badly misprojected Santa Catalina Islands.

This map was created in 1765 and issued in various formats through 1770.