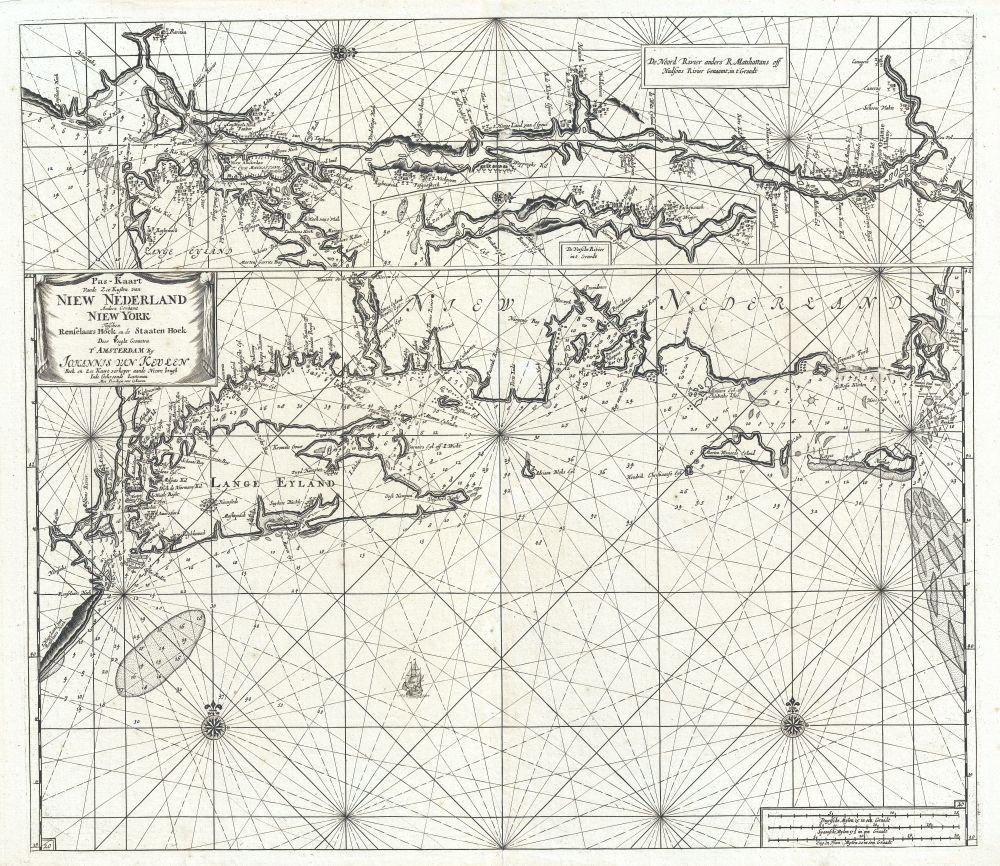 The extent of Dutch knowledge of New York and New England at the time of the British takeover of New Amsterdam.
$10,000.00

An important discovery, this is Johannes van Keulen and Claes Janszoon Vooght's 1702 map of New York, Long Island, the Hudson River, and the Connecticut River. First appearing in 1684, this is the second earliest published map to detail the coast between Long Island and Cape Cod. It also features the earliest published maps of any American River. Furthermore, many of the place names throughout make their first appearance here. As such, it may be considered the high point of Dutch knowledge about New Amsterdam before the British takeover.

This is essentially three maps on a single sheet. The main map, occupying the lower two-thirds of the document, illustrates the coast of New Netherland from, roughly, Sandy Hook and Staten Island eastward, along the Long Island Sound and Connecticut coast, to Martha's Vineyard and Nantucket. This is, as noted, the second earliest specific map of this region, being superseded only by Arent Roggeveen's Pascaerte van Nieu Nederland. While some aspects of the map are clearly drawn from Roggeveen, such as the dramatically foreshortened form of Long Island, other aspects, such as the sophisticated toponymy exhibited throughout, reference unknown sources. As one of Amsterdam's premier cartographers, van Keulen doubtless had access to manuscript maps controlled by the Geoctroyeerde Westindische Compagnie (Dutch West Indian Company / GWIC), and we can speculate that much of the new toponymy is drawn from such sources. Among the place names identified on Long Island are Breukelen (Brooklyn), Heemstede (Hempstead), Amersfoord, Oyster Bay, Zuyd Hampton (Southampton), and Oost Hampton (East Hampton); and along the Connecticut coast are Grenwits (Greenwich), Stamford, Strafford, Milford, and Gilford, among other towns. Many of these do not appear on the Roggeveen or any other earlier chart.

The Earliest Representation of an American River on a Printed Map

Despite its important and highly influential mapping of New York and Long Island, this map's true claim to fame are the upper insets which represent the earliest representation of an American River (in this case 2 rivers) on a printed map. The main inset, which covers the entire upper quarter of the map, details the course of the Hudson River from, roughly, New York Harbor to Albany. This inset is oriented to the west and offers a larger scale presentation of Manhattan and western Long Island. Here, unlike on the larger map below, New Amsterdam is specifically named. It is noteworthy that, although New York appears in the map's title, the term has not found its way onto the map itself. Perhaps van Keulen had hopes the Dutch would reclaim their colony. A number of settlements along the Hudson, including Albany, are identified.

Within the larger inset of the Hudson River, a smaller map illustrates the course of the Connecticut River (Versche or Fresh River). Unlike the Hudson River, which was well known to the Dutch, the Connecticut River, despite being initially explored by Adriaen Block in 1614, was almost entirely dominated by the English. Nonetheless, Van Keulen successfully maps at least four known settlements, Veldt (Weathersfield), Hereford (Hartford), Zee Brock (Sea Brook), and Winser.

There are four known states of this map, the present example represents state 4, issued in 1702. It is identifiable as such by the addition of drapery around the title cartouche and the number '20' in the lower left corner. All states are cartographically identical and extremely scarce on the market.

Very good condition. Strong impression. Original centerfold. Blank on verso. There is a slight scuff at the at the center of the map along the Hudson River.