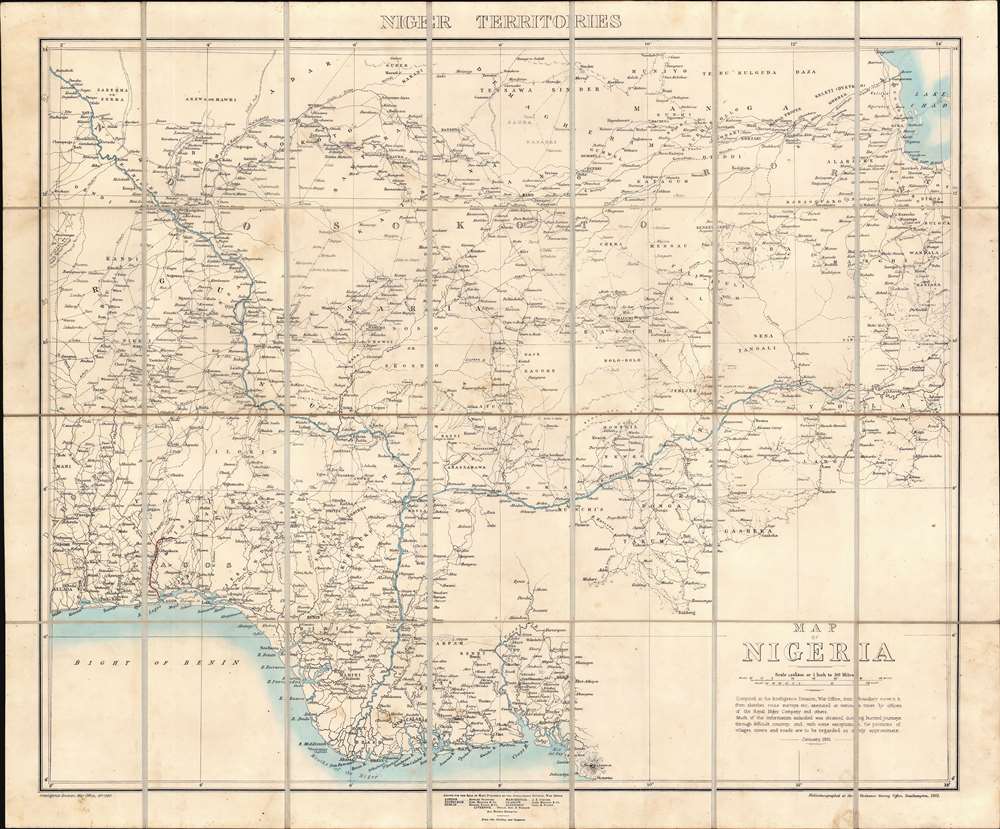 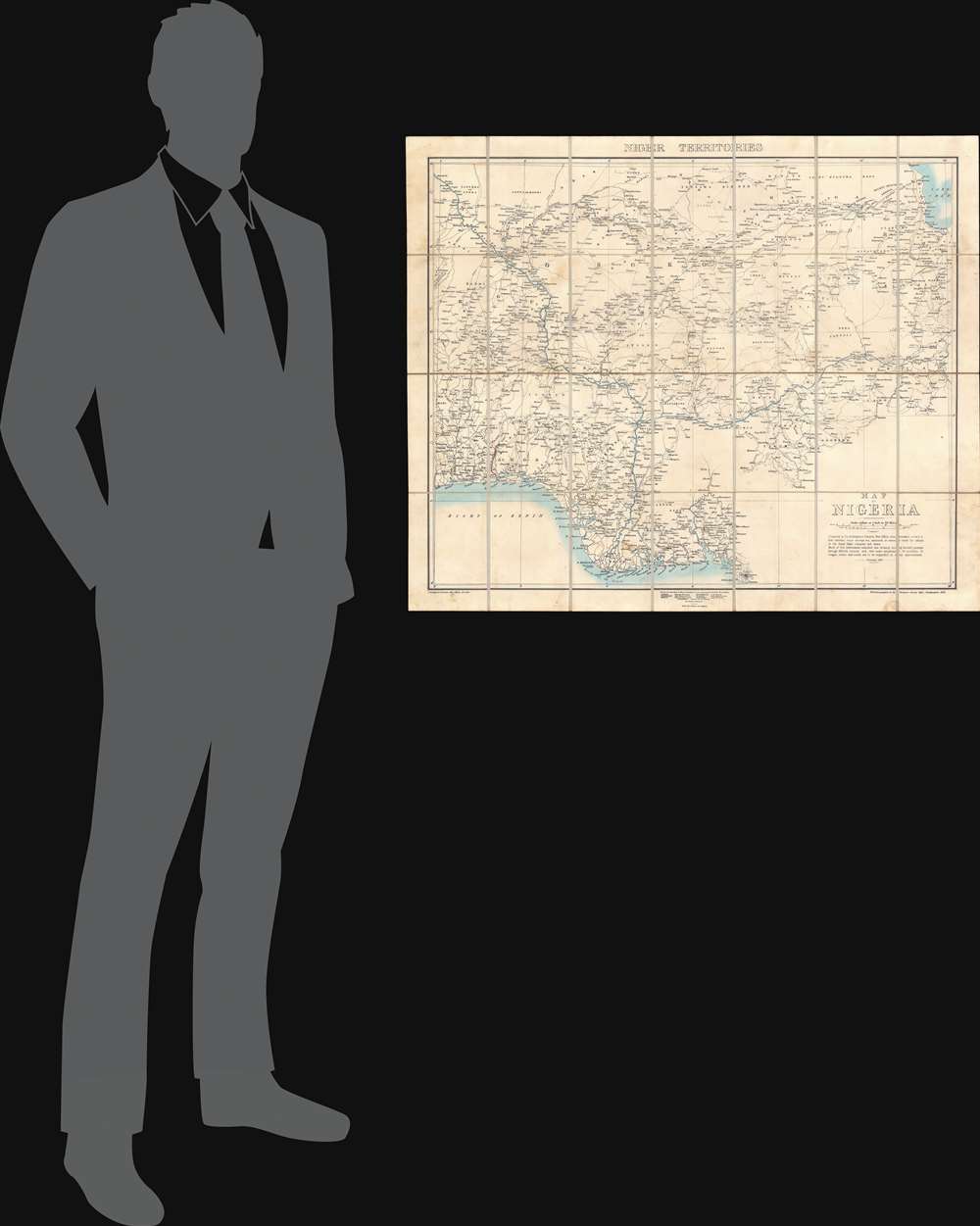 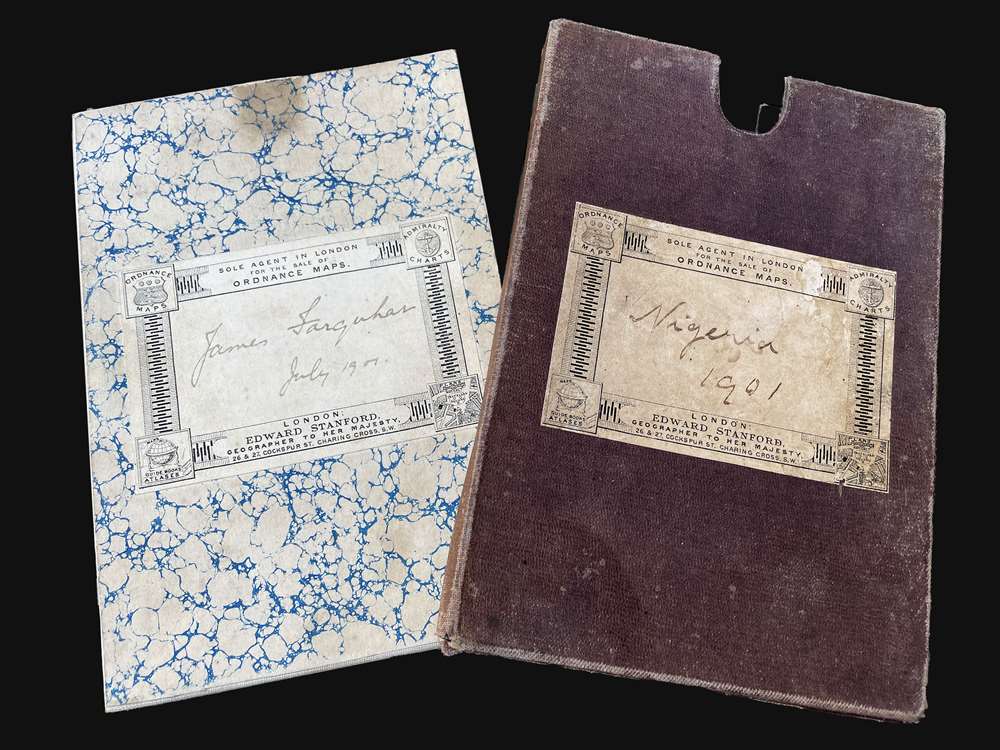 Foundational Nigeria map made at the beginning of Britain's most aggressive expansion into the region.

A rare 1901 first edition map of Nigeria issued by the Intelligence Division of the British War Office. The map was issued shortly after the British Crown took full control of Nigeria, establishing the Colony and Protectorate of Nigeria, and at the beginning of a period of aggressive expansion and conquest. Coverage extends from the Bight of Benin to Lake Chad, then south to Mount Cameroon. The map offers impressive detail - and not only along the well-traveled Niger, but also inland, naming hundreds of African cities and villages, as well as conflicting tribal and religious land claims. This is the first edition of the present map, although the basic template and cartographic data was reused until World War II (1939 - 1945), marking it as a foundational map.

British colonial activity in Nigeria can be traced to 1861 when Britain annexed Lagos as part of its ongoing war against the Trans-Atlantic Slave Trade. In 1884, the crown established the Oil River Protectorate - referring to the Niger Delta's rich production of Palm Oil. From Lagos, the British gradually expanded their influence, forcing, cajoling, and buying the loyalty of surrounding kingdoms. In the 1885 Berlin Conference, the other European colonial powers acknowledged British suzerainty over the region. The Crown founded the Royal Niger Company in 1886, granting the joint stock company a charter calling for the exploitation and development of Nigerian resources, but in the end Nigeria proved an untenable money pit. They did however expand British influence southwards into the Lower Niger, driving out rival German colonials, renaming the area the Southern Nigeria Protectorate (SNP). Nonetheless by 1900 the Royal Niger Company was in default and ceded its claims to the British Crown for £865,000. Under Crown control, the Northern and Southern Nigerian Protectorates were amalgamated as the Colony and Protectorate of Nigeria. By 1901, the Protectorate began to aggressively expand its borders, fighting in a series of wars with neighboring African kingdoms, tribal confederations, and the Sokoto Caliphate. The largest of these were the Anglo-Afro War (1901 - 1902) and the subjugation of the Sokoto Caliphate (1900 - 1903). It was during this time of rapid expansion that this map was compiled - a synthesis of the most up to date cartographic information collected by intelligence officers, war parties, and tribal allies - as an essential tool for both conquest and administration.

Photo-zincography and helio-zincography are two very similar reprographic processes originally made famous by their use by the British Ordnance Survey. In 1859, photo-zincography was developed relatively simultaneously by John Walter Osborne in Australia and by two soldiers at the Ordnance Survey in Southampton, Captain Alexander de Courcy Scott and Lance-Corporal Rider. The latter individuals were working under the command of Colonel Henry James, who immediately took credit for the innovation. Essentially, photo-zincography is a reproductive process that employed the use of a glass photographic negative that would then be used to create a carbon positive print which was then transferred to a zinc plate. Helio-zincography, while essentially the same process, eliminated the need for the carbon positive print by placing the negative directly on the zinc plate.

The present map bears the signature of James Farquhar, dated July 1901. Farquhar was a wealthy Scotsman from a prominent merchant family.

First edition. This map was compiled in 1901 by the Intelligence Division of the British War Office. It was printed in London using the helio-zincographic method by the Ordnance Survey Office, Southampton. As a foundational map, this first edition map served as the baseline for most subsequent maps of Nigeria until World War II. We note an example of this edition at the the British Library, Oxford University, the University of Manchester, and the British National Archives, Kew. No market history.