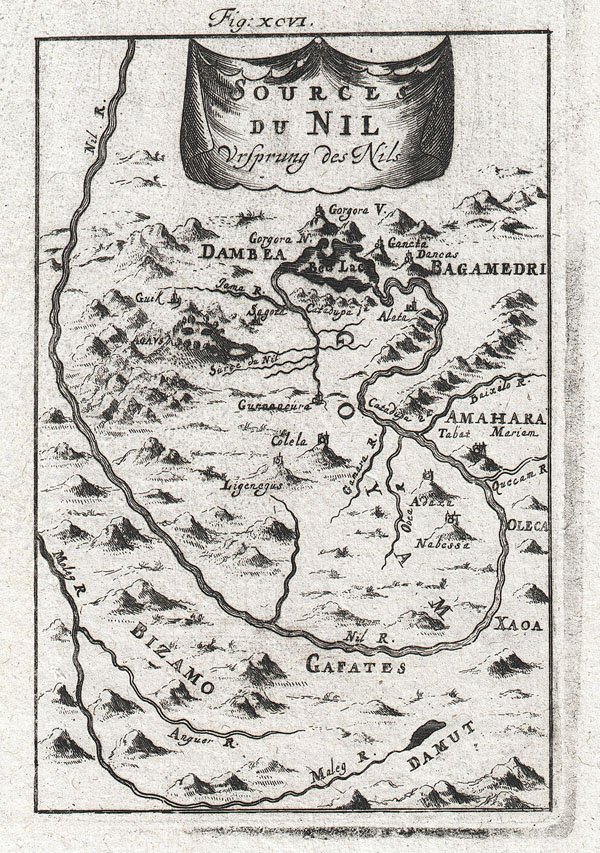 From his two springs, in Gojam's sunny realm,
Pure welling out, he [the Nile] through the lucid lake
Of fair Dambea rolls his infant stream.
-Thomson, James: 'The Seasons: Summer,' 805–8

A stunning and surprisingly accurate 1719 Map of the Source of the Nile by Alain Manesson Mallet. Details what is today the Gojjam (Goyam on map) district of Ethiopia around Lake Tana ( here Bed Lac or Dambea). Accurately describes the course of the Blue Nile as it flows southward from the southeastern corner of Lake Tana before hooking around to the west and flowing northwards toward its convergence with the White Nile and, ultimately, the Mediterranean. Names numerous villages and Ethiopian Orthodox monasteries throughout. Shows mountains in profile, however, as this is not a particularly mountainous region, we can assume that Mallet must have added these merely as decorative place holders. Mallet no doubt drew this map based on the accounts of early missionaries who were active in the area throughout the late 17th century. Prepared as figure XCVI for the 1719 edition of A. Mallet's seminal Description de l' Univers which was, itself, the largest and most comprehensive work of its kind issued to date.

Thomson, J., The Seasons , (London: Henry Woodfall for A. Millar, 1744).
Looking for a high-resolution scan of this?