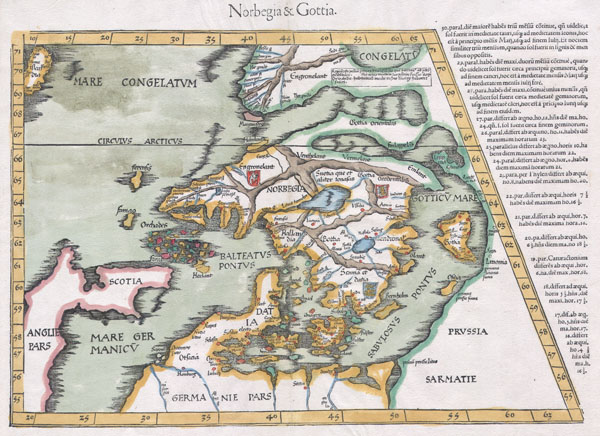 A masterpiece. This is an important early map of Scandinavia by cartographer Martin Waldseemuller. It is heavily based on the similar map by Claudius Clavus, which appeared in the 1425 Ulm edition of Ptolemy's Geographia. The most notable difference between this edition is the addition of armorial shields for the Scandinavian countries. In this map, much of the geography is conjectural at best. Iceland, Norway, and Sweden are nearly unrecognizable. At the top of the map, Greenland appears connected to the mainland by a narrow land bridge. The text on the right describes the lengthening hours of daylight as a traveler moves north. The woodcuts for this map were prepared by Lorenzo Fries. The text was edited by Michael Servetus, who was later burned at the stake for his outspoken heresies against the Holy Land.