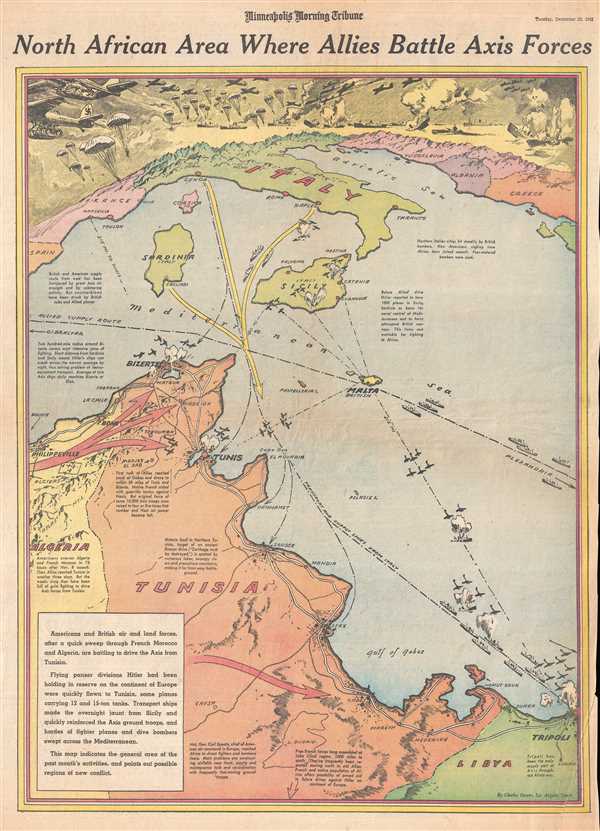 Published two days before the Allies resumed their offensive to liberate North Africa.
$300.00

This is a Tuesday, December 22, 1942 Charles Hamilton Owens and Minneapolis Morning Tribune pictorial map of Tunisia and the Mediterranean Sea. The map depicts the region from southern Europe, including France, Italy, and the Balkans to Tunisia, Algeria, and Libya.

At the time of its publication, Operation Torch (the Allied invasion of Morocco and Algeria) had happed six weeks before and the American, British, and French forces that participated in the landings had since marched across Morocco and Algeria to Tunisia. General Sir Bernard Law Montgomery and his 8th Army had been fighting Axis forces in a back-and-forth campaign in the western portion of North Africa since 1940. Now, the 8th Army was approaching Tunisia from the east, squeezing Axis forces between the two armies. Unfortunately for the Allies, delays in the drive across Algeria allowed the Axis forces in Tunisia time to move in reinforcements that more than tripled their overall strength. The cities of Tunis and Bizerte in northern Tunisia had been fortified and the Allies faced an unknown foe in the form of five brand new Pz. VI (Tiger) tanks, which had not yet been combat tested. Per the Encyclopedia Britannica, 'The Allies had lost the race to Tunis, but that tactical failure would yield an enormous strategic victory; Hitler and Mussolini were thus induced to pour significant resources into Tunisia at a time when those assets were desperately needed elsewhere.' The fighting in North Africa would resume two days later, on December 24th and would drag on for another five months, as Axis forces would not surrender until May 13, 1943.

One of the most striking features of this map is how apparent Owens renders the vital Mediterranean transportation and supply lines. Critical to both Axis and Allied armies, the close proximity of Sicily, Sardinia, and peninsular Italy gives the viewer the opportunity to visually understand the ease with which Axis forces could be sent to Tunisia. The Allied advance from Algeria is illustrated by large red arrows, while Axis reinforcements from Italy are show by one large yellow arrow. The road network along the coast of Libya and Tunisia is illustrated, and coastal cities from Tripoli to Sfax, Sousse, Tunis, Bizerte, and Bone are all illustrated and labeled. An incredible vignette of Axis forces being airlifted into the combat zone occupies the top portion of the map, complete with tanks being flown in attached to the bellies of Nazi aircraft and paratroopers jumping into the fight.

This map was drawn by Charles Hamilton Owens and published by the Minneapolis Morning Tribue onDecember 22, 1942.