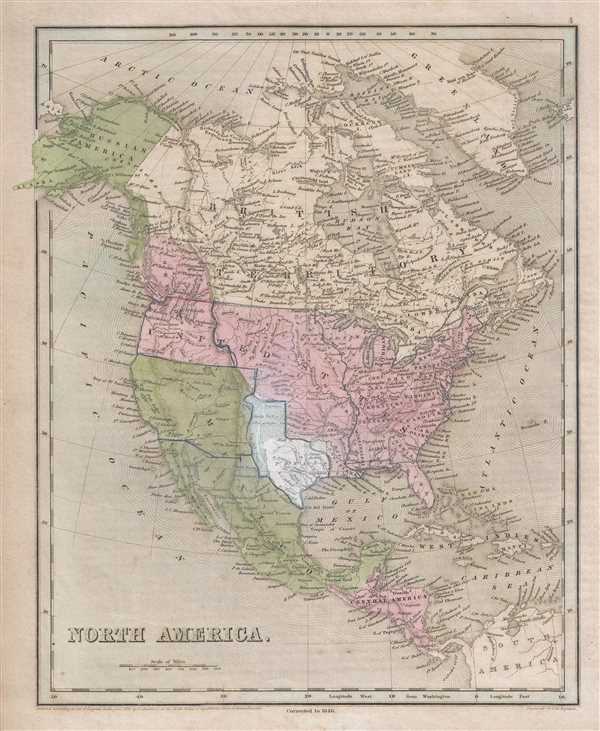 Depicts the Republic of Texas and Texas at its largest in manuscript.

This is an 1846 Thomas Bradford map of North America. The map depicts the continent from the Arctic Ocean to northern South America (Colombia, Venezuela) and from the Pacific Ocean to the Atlantic Ocean. Several remarkable and ephemeral political boundaries are illustrated here, such as the 54°40' dispute and Texas as both a republic and before the Compromise of 1850.

Texas as a Republic and before the Compromise of 1850

The geography of Texas illustrated on this particular example of this map is unique, thanks to the previous owner's manuscript additions. Shaded in a white ink, Texas is depicted as it was after the Mexican War and prior to the Compromise of 1850. Texas claimed all land east of the Rio Grande, which extended north to modern-day Wyoming, to the U.S. border, which at that time was the Arkansas River. Texas was formally admitted to the Union in December 1845 and the Republic of Texas ceded sovereignty to the United States on February 19, 1846. The annexation of Texas led to a deterioration of foreign relations between the United States and Mexico due to an unresolved border dispute between Texas and Mexico and directly led to the Mexican-American War.

The extension of the Pacific Northwest border of the United States is not depicted at the 49th parallel, which is the contemporary border between the United States and Canada, but rather at the parallel 54°40' north, which was the border with Russian America and well into modern day British Columbia. The Oregon Question was disputed for decades between the United States and Great Britain. The basis for the dispute was mostly economic. The fur trade in the Pacific Northwest at this point in history was booming, which meant that both British and American companies and citizens wanted access to this area. American interest also came back to the concept of Manifest Destiny and the Westward Expansion. Although the border was set at the 49th parallel by 1846 (as the manuscript notation in Washington State notes), the crisis was not fully resolved until 1872. A manuscript notation in red pen illustrates the U.S.-Canadian border extension along the 49th parallel and around Vancouver Island.

Other manuscript notations are illustrated here, such as the outlining of the Louisiana Purchase as well as the Mexican Cession and the Gadsden Purchase, which took place in 1853. Florida is outlined by itself, perhaps referring to the Adams-Onís Treaty, signed between the United States and Spain, which formally ceded Florida to the U.S. It is unclear why Nova Scotia and New Brunswick are outlined, as well as why each of the Great Lakes merited outlining as well. Overall, myriad locations throughout the continent are labeled. Each of the states within the United States that had been admitted by 1846 are labeled, along with state capitals and other major cities. All five of the Great Lakes are labeled, along with numerous rivers. Locations in Canada, Mexico, and Central America are also labeled. The vast majority of Alaska (labeled as Russian America) and the Yukon remain 'unexplored'.