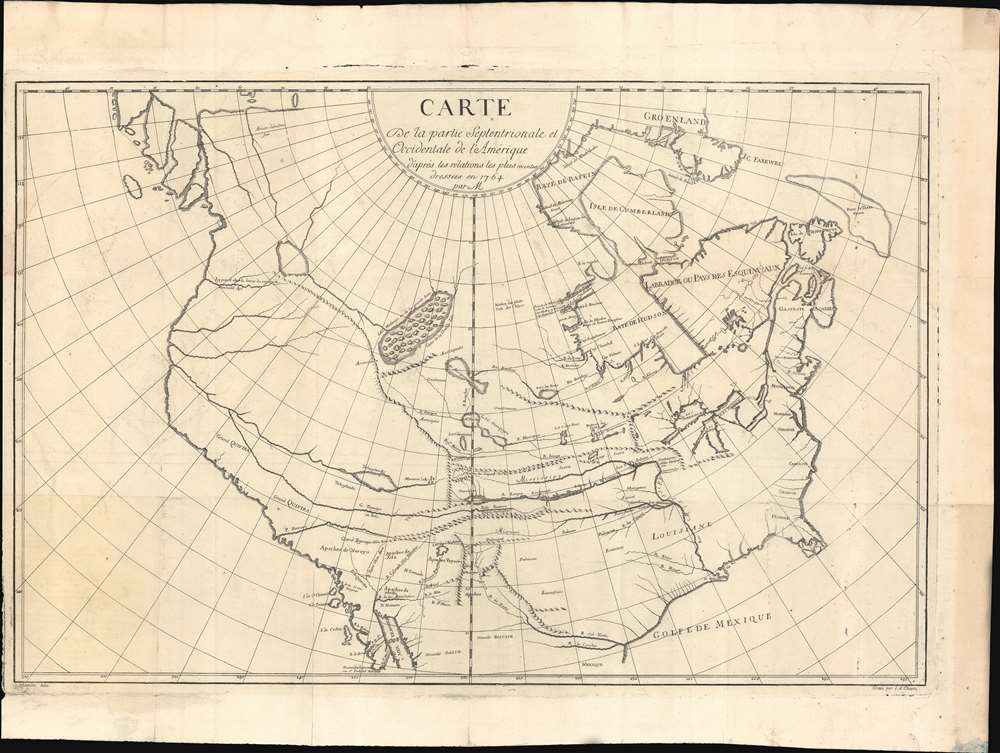 This is an extremely scarce, influential, and often misunderstood map of North America published in 1765 by Samuel Engel. Engel composed this map to address and reconcile conflicting speculations regarding the American west and North Pacific - specifically the Buache-Delisle / Müller-Bering controversy. He compiled it from primary-source material, ranging from Lahonton's like fictional expedition to the factual account of the American Indian voyager Moncacht-Apé. The latter led to Engel's mapping of Columbia River - the first such map to do so based upon actual observation. Although obscure today, Engel's work was well received when published and thus provided source material for some of the most significant maps of the latter 18th century.

Engel composed this map to illustrate his attempt to reconcile and correct the cartography that emerged from the Buache-Delisle, Müller-Bering controversy over the geography of the North Atlantic and the Pacific Northwest. As described by Lada-Mocarski, Engel

examined diligently the maps and writings of Kirilov (the compiler of the first Russian atlas), Buache, Delisle, Müller, Gmelin, and others - and invariably, with some justification, found something wrong with each of them. He examined these works with regard to the northern parts of both Asia and America. Most of the questions he raised were valid and the present-day student of these regions would profit by reading his work with a modern maps before him, to see who was right or wrong - and when wrong, how wrong. A valuable part of Engel's present work is his rejection of the persistent belief held by many of his contemporary geographers and cartographers that California was an island. He unequivocally asserted... that (in translation), 'California is not an island but a peninsula. (Lada-Mocarski, V., Bibliography of Books on Alaska Published before 1868).

This important map provides the source material for Denis Diderot and Robert de Vaugondy's important speculative map of North America. The Diderot/Vaugondy map was published as part of a 10-map supplement to Diderot's popular Encyclopedie intended to explore positivist speculation on the still unknown cartography of western North America. While the latter and much smaller Diderot/Vaugondy map is reasonably common, this, its source map, is far more significant and rarely appears on the market. The scarcity of this map can be illustrated most plainly by the fact that, despite its importance, this map is not identified in Wheat's Transmississippi West (the derivative 1771 Vaugondy/Diderot Map is included).

Engel's map covers North America from the Gulf of Mexico to the Arctic Circle and from the Grand Banks to a proto-Alaskan archipelago. It is presented on an equidistant cylindrical projection, possibly on the c. 1745 Cassini-Soldner model. Engel's map consolidates numerous cartographic theories, reports from voyages both dubious and factual, and established conventions into a sophisticated examination of the general layout of waterways - especially in the American west.

Engel is cautious to not specifically illustrate a Atlantic-Pacific water connection, while at the same time leaving open the possibility. Rivers and lakes extending from the eastern part of the continent almost, but never quite meet their western counterparts. Six largely mythical river systems extend inland from the unlabeled Pacific. Several meet with enormous and interesting apocryphal lakes, including Lac Michinipi, Lac Tahuglauks, and an unlabeled lake that Robert de Vaugondy, in his derivative map, associates with the mythical Lake Conibas.

Through error or luck, it is interesting to observe not only where Engel went wrong, but also where he was right. The southernmost of the several great western lakes identified here is Lake Tahuglauks, situated essentially where Great Salt Lake actually exists.

The cartographer here references the dubious explorations of the Baron Louis Armand de Lahonton (1666 - 1715). Lahonton was a French military officer commanding the fort of St. Joseph, near modern day Port Huron, Michigan. Abandoning his post to live and travel with local Chippewa, Lahonton claims to have explored much of the Upper Mississippi Valley and even discovered a heretofore unknown river, which he dubbed the 'Longue River'. We can see this river extending westward from the Mississippi near the Falls of St. Antoine (St. Anthony Falls, modern day Minneapolis). This river he claims to have followed a good distance from its convergence with the Mississippi.

Beyond the point where he himself traveled, Lahonton wrote of further lands along the river described by his Native American guides. These include a great saline lake or sea at the base of a mountain range. This range, he reported, could be easily crossed, from which further rivers would lead to the mysterious lands of the Mozeemleck, and presumably the Pacific. By incorporating Lahonton's mountains, Engel effectively puts in place the Rocky Mountains. Various scholars both dismissed as fancy and defended as speculation Lahonton's work. Could Lahonton have been describing indigenous reports of the Great Salt Lake? What river was he on? Perhaps we will never know.

What we do know is that on his return to Europe, Lahonton published his travels in a popular book. Lahonton's work inspired many important cartographers of his day: Engel, Moll, De L'Isle, Popple, Sanson, and Chatelain to name just a few, to include on their maps both the Longue River and the saline sea beyond. The concept of an inland river passage to the Pacific fired the imagination of the French and English, who were aggressively searching for just such a route. Unlike the Spanish, with easy access to the Pacific through the Mexico port of Acapulco, the French and English had no easy route by which to offer their furs and other commodities to the affluent markets of Asia. A passage such as Lahonton suggested was just what was needed. Wishful thinking more than any factual exploration fueled the inclusion of Lahonton's speculations on so many maps.

Moncacht-Apé's epic journey most likely took place in the late 17th century. The tale was later passed on to Antoine-Simon Le Page du Pratz, a French explorer and ethnographer in Louisiana. Moncacht-Apé met Le Page near Natchez sometime before 1729 and recounted his fantastic voyage, which Le Page published in 1753. Unlike the voyages Lahonton, most scholars consider the Moncacht-Apé exploration to be factual, though possibly embellished. Two factors contribute to this. First, the Moncacht-Apé tale includes none of the speculative geography common to European mapping of the American west. Second, Le Page's account, while the largest and most thorough, is not the only account of Moncacht-Apé. Other known persons, most notably the French officer Jean-Francois-Benjamin Dumont de Montigny, also referred to this voyage and met Moncacht-Apé.

The map includes a number of large inland lakes, among them the large and striking island filled Lac Michinipi, and a smaller unnamed connected lake to the west. Engel's source material for both is unclear. Michinipi may have some relation to the c. 1730 explorations of the French fur trappers La Verendrye and Nicolas Jeremie. Some suggest this may have been an early account of Reindeer Lake or simply an attempt to map the densely watered region to the northwest of Winnipeg. Later cartographers associate Michinipi with Lake Assiniboine, though here Engel makes them two separate lakes. Verendrye and Jeremie traveled the rivers and lakes between Lake Winnipeg and the Hudson Bay, as well as the connections to other lakes further north. The larger lake further to the west is something of a mystery, as are its connections to large northern river systems. Robert de Vaugondy, in his map issued five years later, associates this with the mysterious and speculative 16th century Lake Conibas.

Indigenous Empires and Cities of Gold

Engel makes only a few notes regarding the indigenous peoples of the region. All tribes west of the proto-Rocky Mountains, he identifies as 'Allies of the Souix,' an assumption no doubt drawn from Jesuit journals. He identifies three mythical kingdoms of the west, Gran Teguaio (Teguayo, also Tolm), Grand Quivara, and Anian. Quivara was initially a civilization sought out by the conquistador Coronado in the Great Plains near the Mississippi. Cartographers steadily moved Quivara further and further west until, as here, it appears in California.

Far to the north on the Arctic coast, north of proto-Alaska, Engel identifies the Land of Anian. The first mention of Anian appears in Marco Polo's narratives, which describe it as 'a place to the east of India.' This India is not the subcontinent, but rather a term that refers to farthest Asia. Since the time of Mercator this term was associated with the extreme northwest of America and a possible straight or even land connection with Asia.

Engel futher offers a unique treatment of the lands to the west of Anian that we have earlier described as a 'Proto-Alaska.' Kershaw considers Engel's cartography derivative of Gerhard Friedrich Müller's (1705 - 1783) map of 1754. Muller, a historian and cartographer employed by the Russian Academy of Sciences, published a map based on actual Russian discoveries in refutation of the more popular speculative Delisle / Buache maps of the same. Muller identifies several of Bering's documented sightings of land either on the Alaskan peninsula itself or the Aleutian Islands. These he connected to form the speculative Muller Peninsula. Engel here takes the idea a step further by turning each sighting of land into an independent island with navigable watercourses in-between - thus more closely resembling the actual Aleutian Archipelago. The reasoning behind this is unclear, but it may have to do with wishful thinking that his Lake Michinipi, which he connects to Anian via riverways, may in fact be a route west via the Lake Winnepeg network to the Columbia River

This map was drawn in 1664 for Engel by M. Jaquier and engraved by Jacques (Iacabo) Anthony Chovin in Paris for publication in his 1765 Memoires et Observations Geographiques et Critiques. There are two variants. One signed 'M. Jaquier' and the other signed 'Maquier'. The variants also differ in that the first has 'par M***' in the title, while the other has 'Par M' (present example). We note no other differences between the plates. The map is represented in perhaps 6 collections in the OCLC. Scarce to the market.


Jacques Anthony Chovin (1720 - 1776) was a Swiss-French engraver active in the mid to late 18th century. Chovin was born in Lausanne, Switzerland. It is unlcear where he was trained, but Chovin was an engraver of exceptional skill. He is best known for the dramatic engraving the 1744 edition of Mathieu Mérian's Der Basler Totentanz ('The Basel Dance of Death'). He engraved several maps for the swiss geographer Samuel Engel (1702 - 1784). He often signed his works 'I. A. Chovin.' Learn More...

Kershaw, K., Early Printed Maps of Canada, vol IV, no. 1122.
Looking for a high-resolution scan of this?