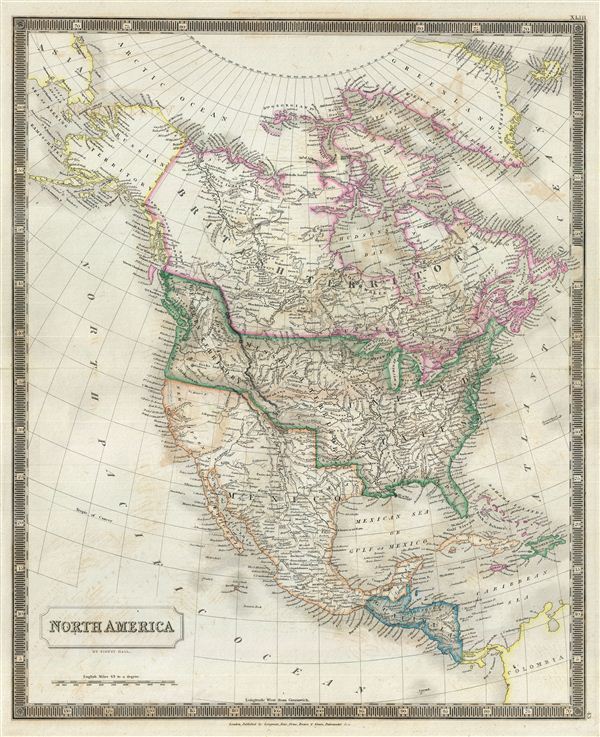 A beautiful example of Sidney Hall's 1835 map of North America. Hall's map covers North America from the Isthmus of Panama to the Arctic Circle, embracing all of Central America, Mexico, the United States, modern day Canada, and Alaska. Hall, as C. Wheat notes in Mapping the Transmississippi West, closely followed

Louis and Clark (with the 'Stinking water'), and … having Long's Lewis River rising just under 'Binghorn or Long's Peak,' with 'James Peak or Sierra Almagro' to the south, and further west the mythical rivers in all their glory.

Wheat here refers to the several speculative rivers that empty into the Pacific in what is not California, including the Mongos, Sacramento, Joaquin, Buenaventura, and San Felipe. Both the Great Salt Lake, identified as Timpanagos, and Utah Lake, identified as Lake Teguayo, are rendered following Humboldt.

Curiously Hall's concedes all of British Columbia to the United States as far north as 54 40,' a highly unusual move for a British cartographer. In the first half of the 19th century the Pacific Northwest was the last frontier in the century's long slaughter of the American beaver in the name of European fashion. Both the British, in the name of the Hudson Bay Company, and the Americans, championed by John Jacob Astor's Pacific Fur Company, were eager to claim monopolistic right over the region. Astor's establishment of Fort Astoria on the Columbia River, marked here but identified following the British nomenclature as Fort George, only served to further tensions with the Northwest Company - the Pacific subsidiary of the Hudson Bay Company. The dispute escalated, giving rise to the Oregon Boundary Dispute and the American expansionist slogan 'Fifty-four Forty or Fight!' The dispute was not resolved until the 1846 Oregon Treaty which, through concessions on both sides, formally set the boundary at the 49th parallel. The name 'Oregon,' we note, appears nowhere on this map, instead it is identified as the 'Western Territory.'

This map is particularly interesting as it is one of the earliest maps to accurately depict the Northwest Passage, predating the Robert McClure expedition by more than 15 years. Hall correctly maps what are today called the Northwestern Passages between Baffin Bay and the Arctic Ocean. His mapping extends as far west as Melville Island and Banks Island, though does not include Prince Patrick Island. Even so, beyond Melville and Banks Islands, there is little but ice and seasonally open sea as far as Alaska and the Bearing Straits.