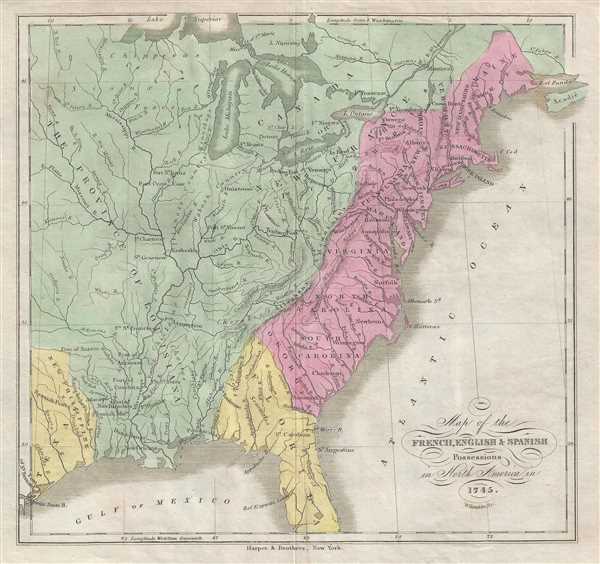 This is an 1846 William Kemble map of the colonial United States. The map depicts the United States from the Missouri River to the Atlantic Ocean and Acadia and from Lake Superior to the Gulf of Mexico. The colonial possessions of the English, French, and Spanish are illustrated. Delineated by different colors, each empire's possessions are easily identified. Britain's claims, shaded in red, make up the thirteen original colonies which became the United States. Each of the colonies is labeled, along with major cities and rivers within the territory. New York, Charleston, and Savannah are among the identified cities. To the West, the Province of Louisiana stretches from the Appalachian Mountains to west of the Missouri River, with the exception of Texas and Florida, which were then claimed by the Spanish. Forts and posts are labeled in Louisiana, Texas, and Florida, along with rivers and the Great Lakes. The extent of Canada which is illustrated is also depicted as a French possession.

This map was created by William Kemble for publication in John W. Monette's History of the Discovery and Settlement of the Valley of the Mississippi, by the Three Great European Powers, Spain, France, and Great Britain, and the Subsequent Occupation, Settlement, and Extension of Civil Government by the United States Until the Year 1846, published by Harper and Brothers in 1846.

William Kemble (1813 - c. 1870) was a New York City based merchant and engraver active in the middle part of the 19th century. Kemble immigrated with his wife Sarah from England to the United States on December 31, 1843 on board the ship Passmoz. He settled in New York where he established himself as an artist, merchant, publisher, inventor, and engraver. Kemble was on the 1839 management committee of the American Art Union, a now defunct organization focused on promoting subscription based sales of American art. He was also a founding member of the Century Club, an arts club that included John G. Chapman, a well-known painter, among others. Kemble is buried in Cyprus Hills Cemetery. Learn More...

Monette, J. History of the Discovery and Settlement of the Valley of the Mississippi, by the Three Great European Powers, Spain, France, and Great Britain, and the Subsequent Occupation, Settlement, and Extension of Civil Government by the United States Until the Year 1846 (New York: Harper and Brothers) 1846.