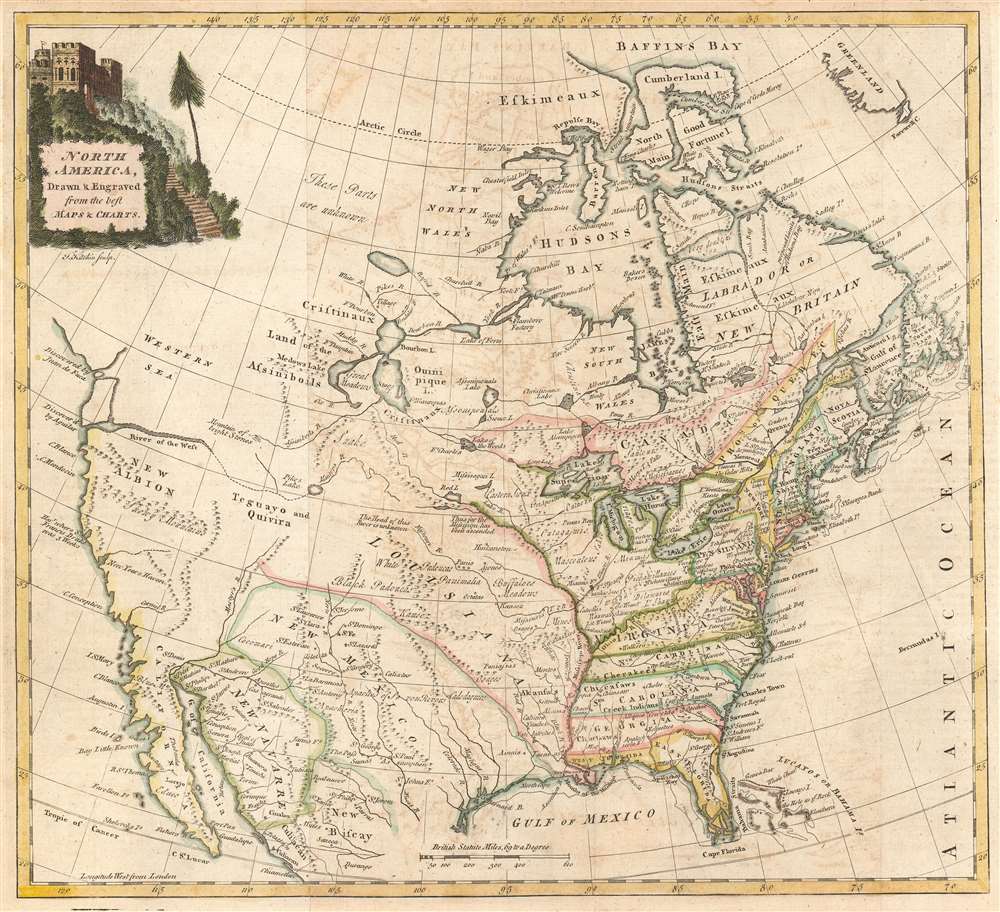 North America between the French and Indian War and the American Revolution.

This is a c. 1770 Thomas Kitchin map of North America issued after the French and Indian War but before the American Revolution. Depicting the continent from the Atlantic to Pacific and from Baffin's Bay to Mexico, Kitchin's map provides an overview (although slightly flawed) of the state of affairs on the North American continent at the pivotal point in world history.

The French and Indian War, part of the larger global conflict between Great Britain and France known as the Seven Years' War, ended with the British in possession of all of France's North American colonies. The war nearly doubled Great Britain's national debt, which the Crown sought to alleviate by excessively taxing American colonies, who they felt should pay for the war. This ultimately led dissatisfaction in the Colonies and the American Revolution. Since the French had ceded the territory east of the Mississippi to the British, Kitchin depicts Virginia, North Carolina, South Carolina, and Georgia as stretching from the Atlantic Ocean, where they had originally been founded, all the way to the Mississippi. Virginia is bounded by the Ohio River to the north, and New England, although jumbled, appears in mostly the correct configuration. Each colony is labeled and towns throughout the colonies are identified, including New York, Philadelphia, Boston, Williamsburg, Jamestown, and Augusta.

Notations Outside the British Colonies

Moving west from Britain's Thirteen Colonies, the Ohio region is delineated by a green line. This part of the continent had been opened during the French and Indian War, but settlement in earnest would not begin until the Northwest Ordnance is passed by the United States Congress in 1787. All five Great Lakes are illustrated and labeled. French Louisiana is labeled as well and highlighted by pink borders. New Orleans is labeled at the mouth of the Mississippi River, bit no other French settlements are marked. American Indian tribes, such as the Miamis and Osages, are noted here, as are the 'Kansez' and the 'Black Padoucas'. One notation, near modern-day Nebraska, reads, 'Buffaloeas. Meadows,' which is probably a fairly accurate description of the region at the time. Other intriguing notations are included in Louisiana, including 'Thus far the Mississipi has been ascended' and another 'The Head of this River is unknown,' in reference to the Missouri River.

Spanish North America and the River of the West

Kitchin's depiction of Spanish North America includes the provinces of New Mexico, New Biscay, and New Navarre, and labels Santa Fe, now in present-day New Mexico. The rest of the western portion of North America is strikingly blank, apparently unclaimed by any of these world powers. Francis Drake's New Albion is identified, although no borders are proposed for this supposed English claim. New Albion is bracketed by 'snowy mountains' on the bottom and the 'River of the West' on top. The River of the West, as it is labeled here, was the mythical water route across North America from the Atlantic Ocean to the Pacific Ocean that innumerable adventurers and explorers had sought for centuries.

Between New Albion and Louisiana, two cities, Teguayo and Quivira are referenced. These cities are part of what have become known as the Seven Cities of Gold. Teguayo and Quivira, along with Cibola, Totonte, Axa, and Granata, were legendary wondrous cities said to have been built by seven bishops who fled Porto in the 8th century after the Moors invaded. Legend has it that these bishops prayed for salvation and were each granted a refuge in the Atlantic in the form of a magical paradise, where each bishop founded a city. After Antilla was not discovered in the Atlantic, legends continued to push the cities further west, until they ended up in the unexplored territory north of Mexico. Years later, the gold and glory-seeking conquistador Hernando Coronado ploughed through the region with a massive army sacking several Zuni Pueblos (generally associated with Cibola) and a city on the Great Plains known as Quivira, but failed to find the gold he sought.

This map was created and published by Thomas Kitchin c. 1770. Two examples are recorded in the OCLC as part of the institutional collections of the Wisconsin Historical Society and the Birmingham Public Library.