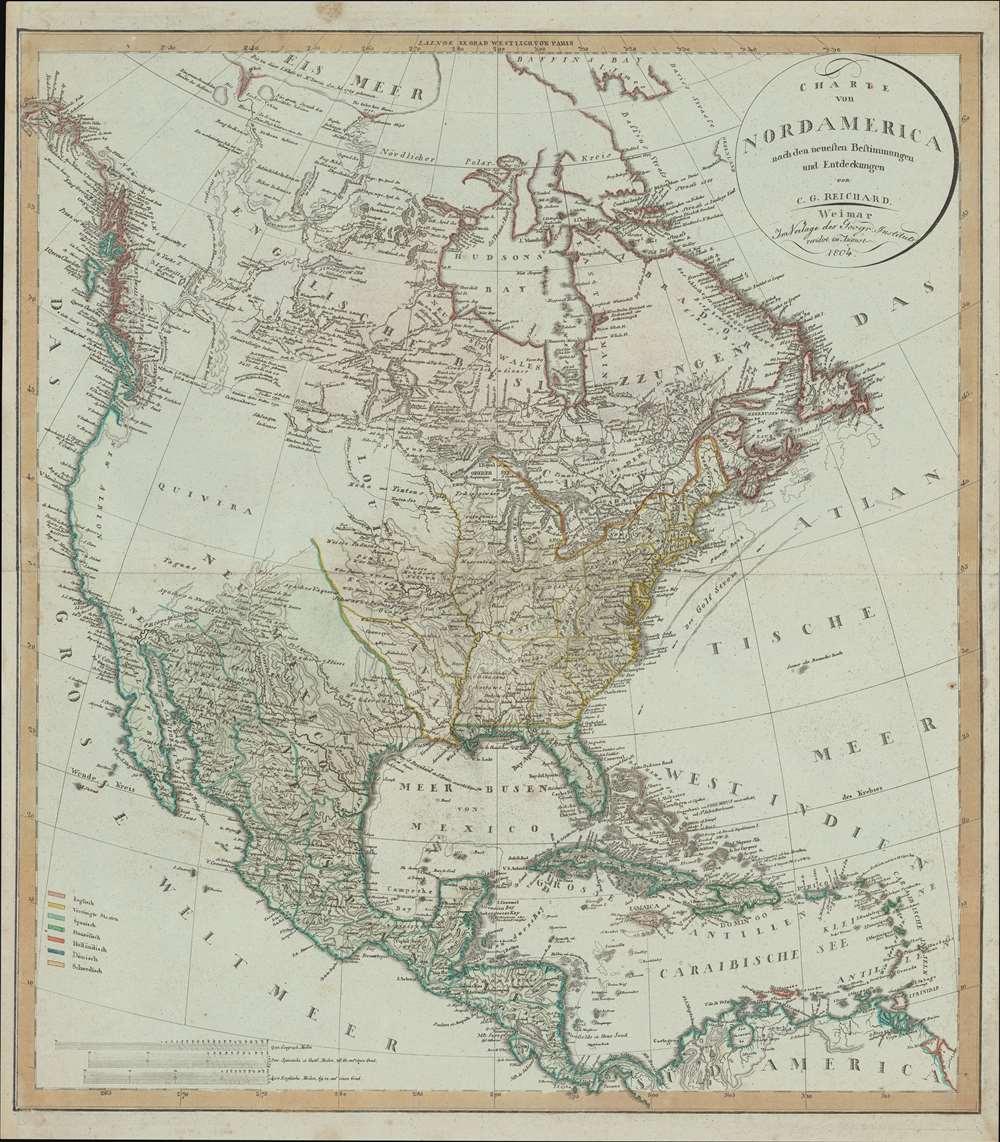 A fascinating 1804 map of North America by C. G. Reichard including the ephemeral 'lost state' of Franklin. The map embraces all of North America from Baffin Bay and Cook's Inlet (Alaska) to Panama and the Spanish Main, including all of the modern day United States, Canada, Mexico, West Indies, and Central America.

The State of Franklin

The most intriguing aspect of this map is the inclusion of the State of Franklin. Also known as the Frankland or Franklinia, Franklin was a proto-state named after Benjamin Franklin and founded by settlers in what was then western North Carolina. It is unique in that it originated in both a cession and secession. It emerged from land in western North Carolina ceded to the federal government to pay war debts. The region was remote, and settlers rightly complained that their interests were sidelined by both North Carolina and the federal government. In hope of greater representation, the Franklinites, as they became known, seceded from North Carolina in 1784 and applied for independent statehood. Despite two attempts with Congress, Franklin was never recognized. For a time, still at odds with North Carolina over taxation, protection, and other issues, Franklin began operating as a de facto independent republic. After four years of turmoil, indecision, increasing debt, and dismissal by Congress, the area was reabsorbed by North Carolina in 1788. Shortly thereafter it become a part of Tennessee, which itself became a state in 1796.

But Why is Franklin in West Virginia?

This map is unique in that it records Franklin in what is today West Virginia, rather than the proto-state's usual boundaries in western North Carolina. This is not merely a cartographic error and has some basis in fact, as explained,

In 1783 a meeting was held at Abingdon, Virginia, over which the Rev. Charles Cummings presided and Col. Arthur Campbell was a leading spirit. This meeting addressed a memorial to Congress asking that a new state, to have the name Frankland, be erected. The boundaries of the proposed state, as set out in this memorial and more fully in a message of Governor Patrick Henry to the Virginia Legislature, embraced most of Southwest Virginia, the southeastern part of Kentucky, the eastern half of Tennessee, parts of Alabama and Georgia, and all of what is now Mercer County, West Virginia and a part of Summers County.

Virginia very promptly squelched this effort to form a new state out of her territory. North Carolina, however, struggled from 1784 to 1788 with her portion (now Eastern Tenn.) which during that time maintained a government calling itself the State of Franklin. Biennial Report of the Department of Archives and History of the State of West Virginia, 1914, page 15-16.

Reichard issued this map shortly after the 1803 Louisiana Purchase - and Louisiana is thusly separated as a distinct area between the Mississippi River and Arkansas River. A second segregated area stands between the Arkansas and Sabine River underscoring the ambiguity over the full extent of 'Louisiana.' The United States maintained the claim of France that Louisiana included the Mississippi River and 'all lands whose waters flow to it'. To the west of New Orleans, the United States assumed the French claim extended as far as the Sabine River. Spain, conversely, maintained that all land west of the Calcasieu River and south of the Arkansas River belonged to Tejas and Santa Fe de Nuevo México. The dispute was resolved in the 1819 Adams-Onis Treaty.

Curious Treatment of the Missouri River

Reichard offers a most curious treatment of the Missouri River - especially when considering that when this map was engraved, the Lewis and Clark Expedition (1804 - 1806) was still underway. Here the Missouri runs northwest from St Louis until fading into the unknown - a point defined by the river transitioning form a solid to a dotted line. The Missouri reappears as a solid line in the vicinity of the Mandan Villages - where, as this map went to press, Lewis and Clark were wintering. The Mandan were visited several times prior, most recently by British and French fur traders, and in 1796 by the explorer John Evans (1770 - 1799), who hoped to find proof the Mandan language was related to Welsh - it's not.

This map was drawn and compiled by Christian Gottleib Reichard and published in Weimar by Geographischen Institutes Weimar. It appears in several editions, but only this, the first edition, featured the State of Franklin. A second edition, issued in the same year, removed Franklin entirely. Over all editions, the map is well represented institutionally, but due to poor cataloging, it impossible to determine first editions vs. more common latter editions.