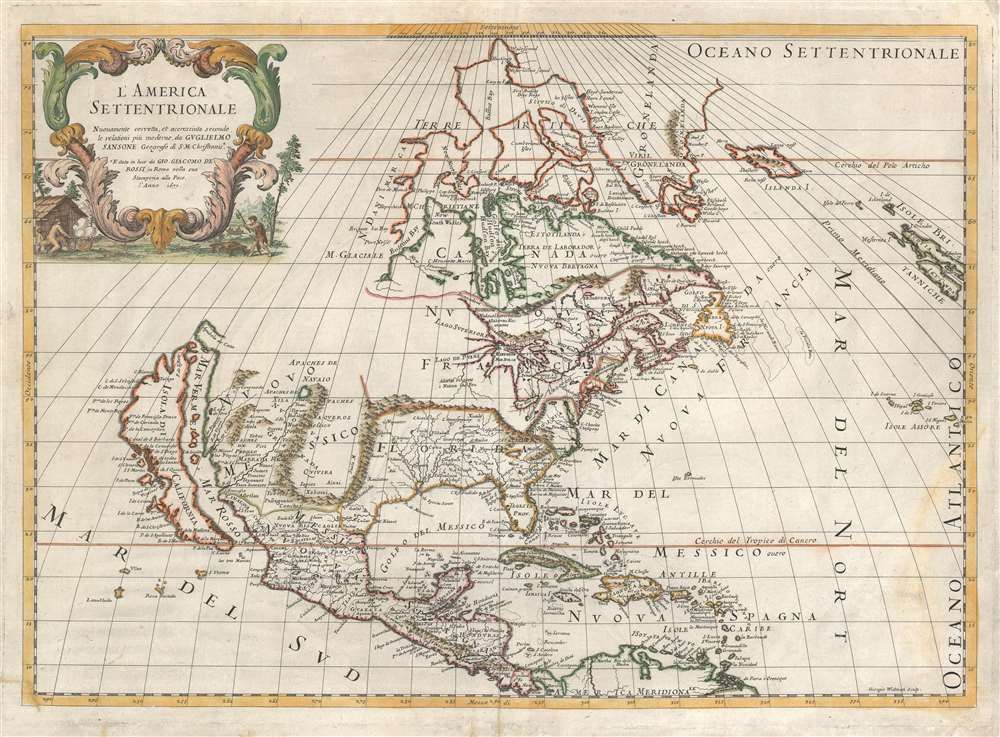 An Attractive Italian Edition of a Seminal Map of America.
$2,500.00

First state of Giovanni Giacomo de Rossi's scarce map of North America, based upon the 1669 issue of Nicolas Sanson's groundbreaking map. De Rossi's map hews faithfully to its source but is translated from the French to Italian. The map covers all of North America from Baffin Bay and Greenland, south to include all of Central America, the West Indies, and parts of the Spanish Main. It similarly extends from California eastwards to the Azores and the British Isles.

The Map: California as an Island

The map presents a striking rendering of California as an Island - a theory of which Sanson was a major proponent. Although the notion first appears in print in the early 16th century, the first maps showing California as an island would appear in England and the Netherlands in the 1620s. Sanson's wholehearted adoption of the myth in the middle of the 1600s would almost indelibly entrench the idea for the rest of the 17th century and well beyond Kino's debunking of the error in the early 18th century.

The idea of an insular California first appeared as a work of fiction in Garci Rodriguez de Montalvo's c. 1510 romance Sergas de Esplandian, where he writes

Baja California was subsequently discovered in 1533 by Fortun Ximenez, who had been sent to the area by Hernan Cortes. When Cortez himself traveled to Baja, he must have had Montalvo's novel in mind, for he immediately claimed the Island of California for the King. By the late 16th and early 17th century, ample evidence had been amassed by explorations of the region by Francisco de Ulloa, Hernando de Alarcon, and others that California was, in fact, a peninsula and not an island. However, by this time, other factors were in play. Francis Drake had sailed north and claimed 'New Albion' near modern-day Washington or Vancouver for England. The Spanish thus needed to promote Cortes' claim on the 'Island of California' to preempt English claims on the western coast of North America. The significant influence of the Spanish crown on European cartographers caused a major resurgence of the Insular California theory. Shortly after this map was made Eusebio Kino, a Jesuit missionary, traveled overland from Mexico to California, proving conclusively the peninsularity of California.

East of the sea separating California from the mainland lies Nuovo Messico. Santa Fe is shown on the west bank of the Rio Norte, which is a conflation of the Rio Grande with the Colorado - the river is shown running from Santa Fe to the southwest rather than to the Gulf of Mexico. The river has its source in a gigantic (and imaginary) lake, appearing amidst the lands of the Apaches de Navaio and the Apaches de Xila This lake may result from Native American reports of the Great Salt Lake or another lake in the region brought back by the Onate and Coronado expeditions.

In addition to Santa Fe, New Mexico is shown to contain the land of Quivira. Quivira, along with Cibola, was one of the Seven Cities of Gold from Spanish legend. (Each of the Seven Cities was thought to have been founded by one of the seven bishops of the Spanish city of Merida, who legend said fled with the city's riches when before the city was sacked by the Moors in 1150. With the discovery of the New World and the fabulous riches plundered by Cortez and Pizarro, the legend of the Seven Cities was recalled by European invaders of the new-found continent. Coronado, hearing tales of the rich Aztec homeland of Azatlan somewhere to the north, believed he was hunting for Quivira in what is today the American southwest. Despite its nonexistence, Quivara would long be shown on maps before disappearing in the early 19th century.

Canada and The Great Lakes

Sanson's geography of the northeastern portions of North America was authoritative and, for its day, accurate. Hudson's Bay appears in nearly recognizable form, albeit with several imaginary openings to the west, suggestive of hoped-for connections with the Pacific Ocean. Sanson's mapping of the Great Lakes was the first to show all five lakes, although lakes Superior and Michigan are shown with their western reaches left unfinished, again suggesting the possibility of a navigable water route to the Pacific.

Although the Northeast is dominated by 'Canada ou Nouvelle France,' the claims of France's European rivals are grudgingly acknowledged. Nouvelle Angleterre (New England), Nouveau Pays Bas (New Netherland, that is to say, modern New York) and even Nouvelle Suede (New Sweden, in New Jersey) are shown - though squeezed down to the coastline, with the place names relegated to the ocean. Virginia is also named.

In Spanish Florida, which extends north to include most of the American Southeast, Lake Apalache, or the 'Great Freshwater Lake of the American Southeast' is noted. This lake, first mapped by De Bry and Le Moyne in the mid 16th century, is a mis-mapping of Florida's Lake George. While De Bry correctly mapped the lake as part of the River May or St. John's River, cartographers in Europe erroneously associated it with the Savannah River, which instead of flowing from the south to the Atlantic (Like the May), flowed almost directly from the Northwest. Lake Apalache was subsequently relocated somewhere in Carolina or Georgia, where Sanson maps it and where it would remain for several hundred years.