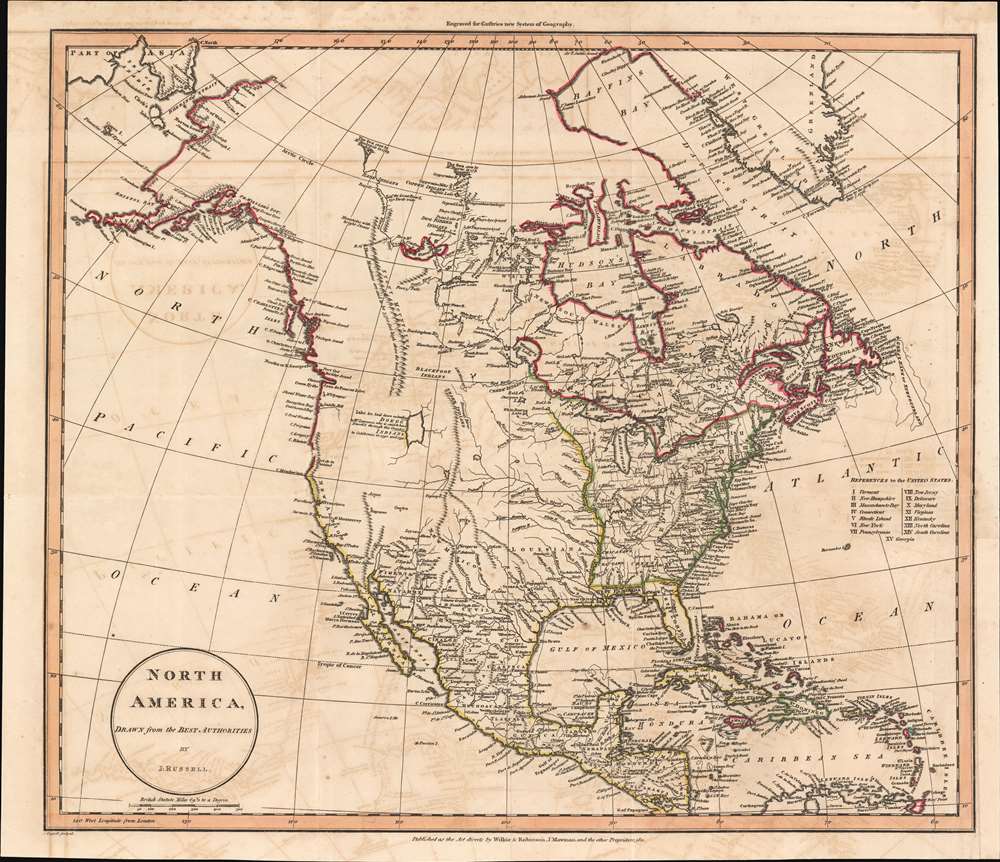 A most fascinating 1811 John Russell map of North America with an intriguing mapping of Great Salt Lake issued just prior the development of the Western Fur Trade and the seminal explorations of Zebulon Pike (1779 - 1813), Stephen Harriman Long (1874 - 1864), and Jedidiah Smith (1799 - 1831). The map postdates the Lewis and Clark Expedition (1803 - 1806), but reconnaissance from that voyage is nowhere in evidence. Instead, the map details the dubious voyage of 'Mr. Lawrence' (see below). Coverage from the Pacific Ocean to the Atlantic Ocean and from Baffin Bay and northern Canada to the extreme northern reaches of South America. The extreme northern portion of North America, above the Arctic Circle, is incomplete, but the Arctic coast is slowing being filled in. The map further identifies the first two European overland expeditions to the North American Arctic, those of Herne and Mackenzie. The United States, still limited to the lands east of the Mississippi and north of Florida, has 15 states, reflecting the addition of Vermont (1791) and Kentucky (1792).

An intriguing large lake is illustrated in the lands of the Doegg Indians and was 'laid down according to Mr. Lawrence, who is said to have 'Travell'd through this Country to California in 1790 and 1791.' The depiction of the lake, which can only be Great Salt Lake, is remarkably accurate. The latitude and longitude, the vertical orientation, and the fact that the lake has no outlet are all correct. Who Mr. Lawrence may have been is unclear and other references are elusive. Lawrence's name appears in historical literature from about 1900, with this map being the earliest known reference.

Likewise, the 'Doegg Indians' are similarly unknown, although the name may refer to the Cheyenne, sometimes called the 'Dog Indians' due to association with the French word for 'dog', 'chien'. While the Cheyenne were not active around or near Great Salt Lake, the using of the term 'Doegg' vaguely suggests French sources. Alternatively, it may refer to the 'Digger Indians', a root eating people active in the Great Basin.

Great Salt Lake was not officially discovered until William Henry Ashley (c. 1778 - 1838) visited it in his expedition of 1824 - 1825. It has long been speculated that Spanish traders, following the Domínguez–Escalante Expedition (1776) route may have been active in the Salt Lake region despite such trade being prohibited under Spanish law. If someone were traveling from Spanish Territory, they may have passed through the Great Basin, particularly if they were following the Domínguez–Escalante route - but this is pure speculation.

The first to encounter the 'Icy Sea' from an overland was Samuel Hearne, who led a 1770 - 1771 expedition to the mouth of the Coppermine River. He set out in December 1770, on his third (and only successful) expedition in the far north. Aided by Chipewyan guides and later joined by the Dene (both members of the First Nations), Hearne became the first European to reach the shore of the Arctic Ocean by an overland route. In doing so, he proved that there was no inland northwest passage.

Alexander Mackenzie was the second explorer to reach the 'Icy Sea' overland. He explored the mouth of the Mackenzie River in 1789 on behalf of the Northwest Company. Mackenzie set out from Fort Chipewyan on July 10th and reached the mouth of the river in the Arctic Ocean on July 14th. Reportedly, Mackenzie named the river 'Disappointment River' as it did not empty into Cook Inlet in Alaska as he hoped. The river was later renamed in his honor.

These two river systems, and others in western Canada, are illustrated in outstanding detail. Lakes and rivers that make up the system, along with temporary housing constructed along the rivers, are detailed.

To the west of the river systems the Stony Mountains or the 'Mountains with Bright Stones' are illustrated. These mountain ranges were a 'real novelty' per map historian Carl Wheat, as few at the time had any inkling as to the size and majesty of the Rocky Mountain Range.

This map was produced and engraved by John Russell and published by 'Wilkie and Robinson and J. Mawman' in 1811. Although it did not appear until issued in Guthrie's New System of Geography (1811), evidence on the map suggests the engraving must have been mostly completed in 1801 or slightly earlier. The absence of George Vancouver's discoveries (not published until 1798) and the data from the Lewis and Clark Expedition (1803 - 1806), is telling. This map exists in only one edition and is uncommon to the market.


Joseph Mawman (fl. 1797 - 1827) was an English general interest publisher active in London during the early 19th century. Mawman published travel guides and narratives, classical works, natural history books, and literary editions as well as producing contract work for both individuals and institutions. Mawman's offices were established in the Poultry, London where he took over the established publishing firm of Edward and Charles Dilly in 1800. The offices were later relocated to Ludgate Street, also in London. Mawman, who nurtured friendships with various period luminaries, was well known and highly respected intelligence and publishing acumen. Mawman died in 1827. Learn More...