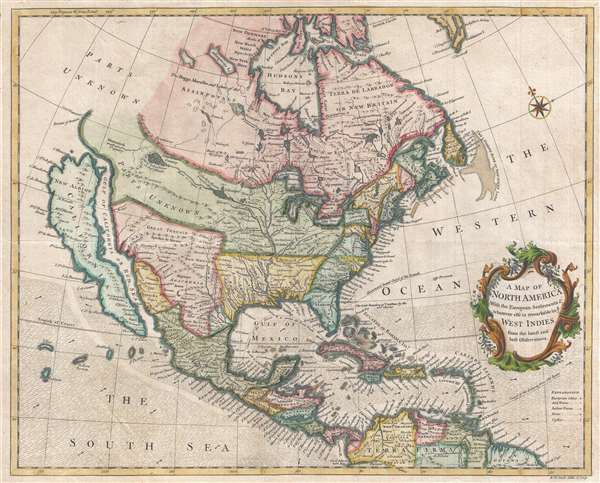 California as an Island and the apocryphal inland rivers of Lahontan.

An uncommon 1745 map of North American with California as an island by Richard W. Seale. The map offers much of interest, including a fascinating mapping of sources of the Mississippi River, California as an Island, and the apocryphal geography of the Baron Lahontan. It covers all of North America from Atlantic to Pacific and from Baffin Bay to the Spanish Main, inclusive of Central America and the West Indies. Oceanic depths, winds, currents are illustrated via stippling, shading, annotation, and arrows. A rococo title cartouche appears at right center.

Insular California here follows the 1635 Second Sanson model based upon the supposed discoveries of Luke Foxe in 1631-1632. Foxe never got close to California, but the map accompanying his 1635 narrative nonetheless introduced new cartography, particularly a modification of the northern part of Insular California that included several new bays identified as Talaago and R. de Estiete, as well as a peninsula from the mainland identified as Agubela de Cato. Foxe provides no basis for the new cartography, but it was embraced by Sanson in 1656 and had a lasting impact on subsequent mappings of Insular California including that of Hendrick Doncker, Herman Moll, and, as here, Richard W. Seale. The present example is particularly late in the history of mapping California in insular form and indeed, is one of the last maps to do so.

The Apocryphal Geography of the Baron Lahontan

This map is perhaps more interesting it embrace of the apocryphal geography of the Baron Louis-Armand de Lom d'Arce de Lahontan. Lahonan's geography here, including the Longue River, Gnacsitares country, and Mozemleck country, identifies the source of the Mississippi River as in a series of supposed Lakes in the then-unexplored American northwest.

Lahontan was a French nobleman who was sent to America in 1683 with the Troupes de la Marine. After several failed military campaigns against English and Iroquois fortifications around the Great Lakes, Lahontan and his troops integrated with the local Algonquin Indians living with them for several years. During this time, Lahontan embarked upon a expedition on up river he referred to as the Rivière Longue Though many consider his tale fanciful, it may have some basis in truth. Lahontan claims to have followed the river for a reasonable distance to a mountain range. Beyond the mountains, he was told by his American Indian guides, lay another river that flows westward and has an outlet into a salt sea. There are many debates regarding this, some consider it an early reference to the Missouri - Columbia River network later explored by Louis and Clark while others believe he may have stumbled upon an early description of the Great Salt Lake.

Teguayo: A Kingdom of Gold

Great Teguaio (Teguayo) appears in the unmapped region to the west of Santa Fe. Teguayo was believed to be one of the Kingdoms of Gold presumed to be found in the unexplored American west. The name Teguayo first appears in the Benevides Memorial, where it is described as a kingdom of great wealth to rival Quivara, another mythical kingdom which curiously does not appear on this map. The idea was later popularized in Europe by the nefarious Spaniard and deposed governor of New Mexico, the Count of Penalosa. Penalosa, imagining himself a later day Pizzaro leading an army of conquest in the new world, promoted the Teguayo legend to the royalty of Europe. Originally Teguayo was said to lie west of the Mississippi and north of the Gulf of Mexico, but for some reason, the French cartographer D'Anville situated it further to the west - Seale here follows D'Anville's model.

This map was included in the 1744/45 Tindal translation of Paul Rapin de Thoyras' French language Histoire d'Angleterre, published between 1724 and 1727. Tindal translated it into English in 1744, republishing the work, for the first time with maps, as Tindal's Continuation of Mr. Rapin's History of England.

Richard William Seale (December 1703 - May 25, 1762) was an English a mapmaker and engraver active in London during the middle part of the 18th century. Seale was the son of Richard and Elizabeth Seale. Richard, his father, was a member of the Stationers Company, suggesting that printing and engraving must have been a family trade. Nonetheless, he did not learn the trade from his father, but rather from Samuel Parker of Clerkenwell, to whom he was apprenticed in 1719. Seale was extremely active as an engraver and publisher from about 1740 until his death in 1762. His cartographic corpus is vast; including pieces engraved for most other notable English cartographers of his period: Willdey, Baron, Toms, Rocque, Basire, Bowles, Benning, among others. In addition to cartographic work, Seale also produce numerous architectural engravings. Learn More...

McLaughlin, G., The Mapping of California as an Island: An Illustrated Checklist, 228.
Looking for a high-resolution scan of this?