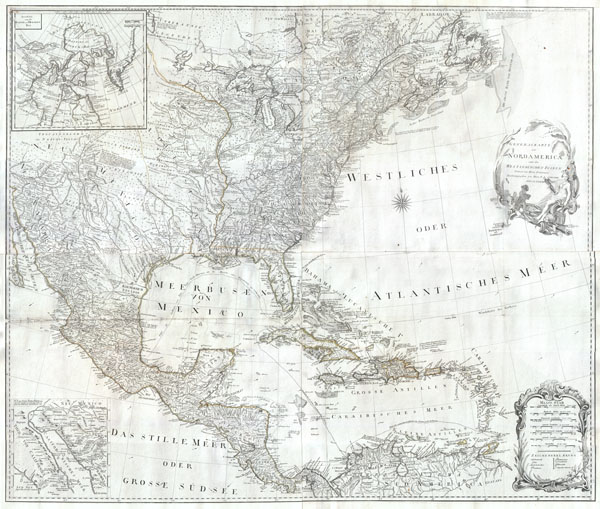 A rare and extraordinary post-colonial wall map of North America by Vienna map publisher Franz Anton Schraembal. Printed in 1788 for inclusion in Schraembal's Allgemeiner Grosser Atlas, this is one of the first maps issued to depict North America following the American Revolutionary War. While this map has been updated to reflect the surveys prepared under Massachusetts governor Thomas Pownall, it is heavily based upon the important 1783 map of North America issued by Sayer and Bennet. The whole is beautifully rendered with wonderful detail regarding the early states, roads, canals, the Great Lakes, American Indian Nations, and explorer's observations. Vermont is not present on the map. Most of the southern states are without western boundaries, but seem to extend only to the Appellation Mountain range. In the upper left quadrant there is an inset of the Baffin and Hudson Bay region including some references to the explorations of Admiral De Fonte in search of a Northwest Passage, as well as to the indigenous Eskimo tribes. Another inset in the lower left quadrant shows the parts of California which Father Franz Kino walked between 1698 and 1701. Kino headed the historic expedition which proved California to be attached to the North American mainland and ultimately defeated the 'California as an Island' theory. Upper right quadrant features an elaborate title cartouche depicting a stylized American Indian woman and cherubs wrestling fish from the sea. A second cartouche in the lower right quadrant features a key to the map. A altogether magnificent map offering both stunning beauty and historic value.

Very good condition. This map has a been professionally cleaned, flattened and backed with linen for stability. Four pieces joined. Minor discoloration on original folds, especially through Mexico in the lower left quadrant. Original hand color. Margnins added all around. Else clean.