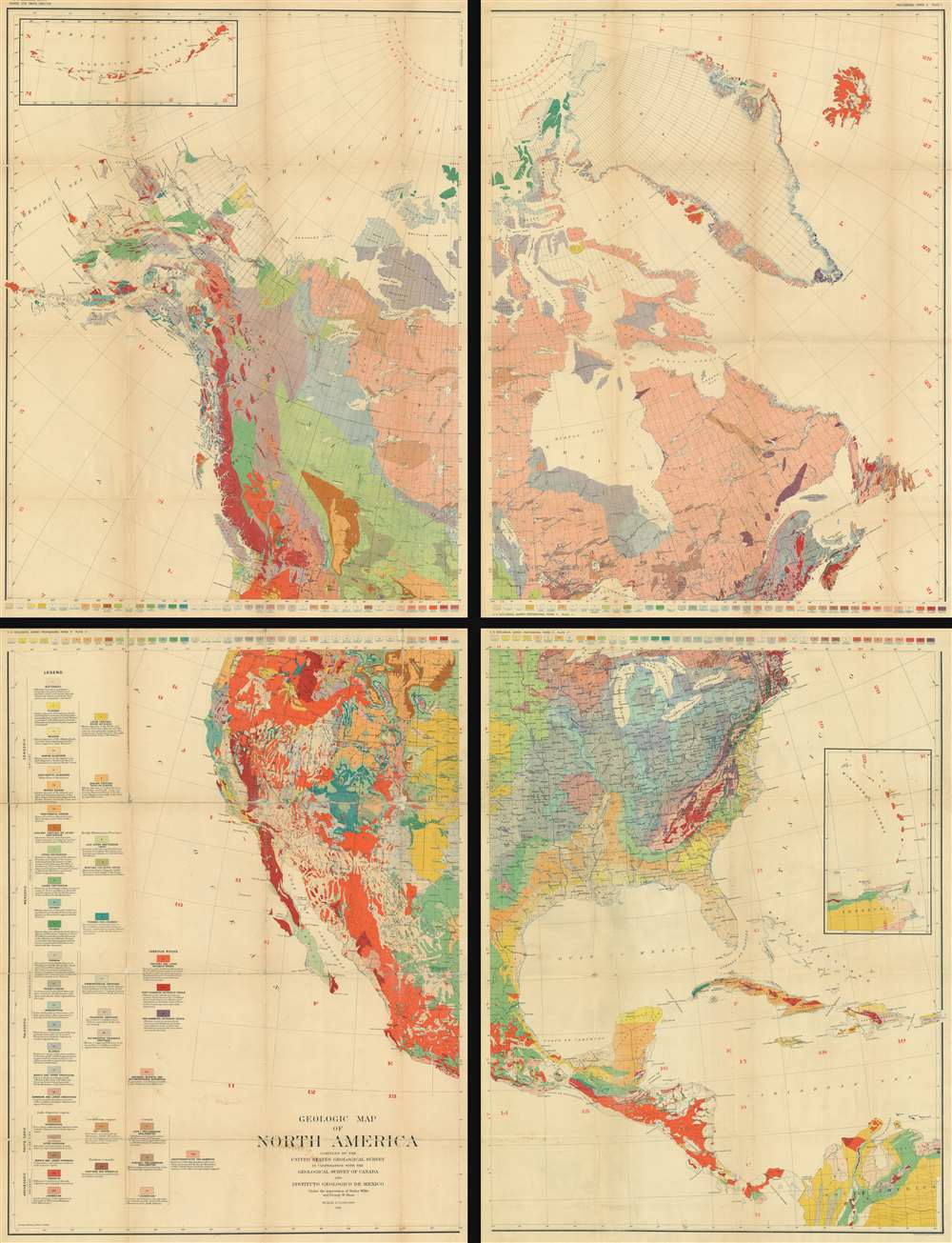 A truly monumental piece, this is a 1911 U.S. Geological Survey four-section geologic wall map of North America. Depicting the entire continent from the Arctic Ocean to northern South America, along with Greenland, Iceland, and an inset of the Aleutian Islands, the map differentiates between forty-one different geologic formations. A detailed legend, containing explanations of each formation, appears on the lower left of the lower-left sheet. The impressive size and detail make this both academically fascinating and a striking display piece.

This map was compiled by the United States Geological Survey with the cooperation of the Geological Survey of Canada and the Instituto Geologico de Mexico under the supervision of Bailey Willis and George W. Stose with the geological drafting executed by Henry S. Seldon. The U.S. Geological Survey published the map in 1911 and is well represented in institutional collections.


Bailey Willis (March 31, 1857 - February 19, 1949) was an American geological engineer and university lecturer. Later in life, he became one of the world's leading experts on earthquakes. Born in Idle Wild-on-Hudson, he was taken to Germany and England at the age of thirteen for four years of schooling. During this time, he gained fluency in German, allowing him to read many scientific texts that were only available in that language. He then enrolled in Columbia University and earned degrees in mechanical and civil engineering in five years. After graduating from Columbia, Willis worked for Northern Pacific Railroad as a survey geologist from 1881 until 1884, when he moved to the U.S. Geological Survey. He worked for the USGS until 1915 and was named director of the Appalachian division in 1889. Willis lectured in geology at Johns Hopkins University from 1895 until 1902 and was appointed head of the Division of Areal Geology for the USGS in 1900. He led an expedition to China for the Carnegie Institution in 1903 and wrote a book entitled Friendly China about that experience. He then consulted for the government of Argentina from 1910 until 1914 and wrote another book, entitled A Yanqui in Patagonia. In the 1920s, he launched an intense campaign to increase knowledge of earthquake hazards and safe building practices. After leaving the USGS in 1915, Stanford University appointed Willis a professor and chairman of their geology department, a position he held until 1922. He was elected to the National Academy of Sciences in 1920 and served as president of the Seismological Society of America from 1921 until 1926. Willis was also influential in getting Mount Rainier designated as a national park. In 1882, Willis married his cousin, Altona Grinnell, with whom he had two children, one of whom died in infancy. Altona died in 1896. He then married Margaret Baker in 1898, with whom he had three children. Margaret died in 1941.