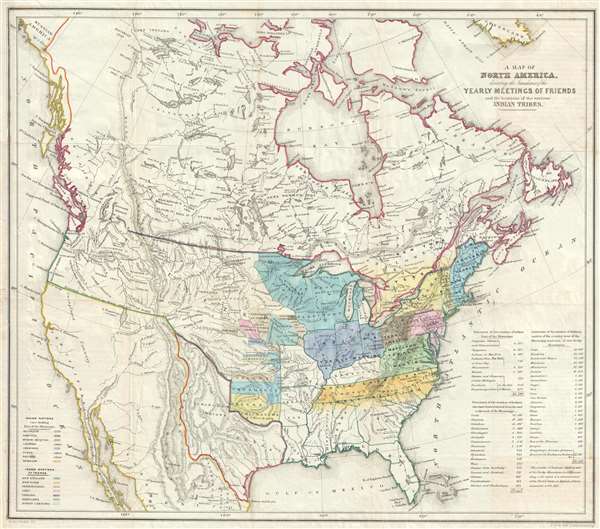 A fascinating 1844 map of the United States, the Republic of Texas, and Canada. This map was made for the annual Society of Friends (Quakers) Aborigines' Committee of the Meetings of Sufferings. This was an annual meeting focused on the wrongs done to indigenous peoples all over the world. The map also serves the dual purpose of illustrating the regional geographical chapters of the Quakers in relation to their annual meetings. American Indian nations are identified throughout as are assigned reservations west of the Mississippi. The map also illustrates the Republic of Texas at its largest.

The map is centered on the United States and extends coat to coast. As this map predates both the Treaty of Guadeloupe Hidlago (1848) and the Annexation of Texas (1845), the Republic of Texas is illustrated in its fullest territorial expression an all lands west of Texas are under Mexican sovereignty. Similarly, as the boundary of the United States with British Columbia had not yet been determined, the border here remains absent.

The Trail of Tears and the Indian Removal Act

The focus of the map is on American Indian relocation related to the Indian Removal Act of 1830 which led to the Trail of Tears - a series of forced relocations of Native American peoples from their ancestral homelands in the Southeastern United States, to areas to the west of the Mississippi River that had been designated as Indian Territory. The cartographer also identifies lands in modern day Iowa and Kansas ceded to or sold by the Ioway, Sacs and Foxes, Sioux, Winnebagoe, and other tribes between 1820 and 1830. Much of the cartography in the Great Plains, where tribes are color coded according to the reservation to which they were assigned is derived from the Washington Hood of 1834. To the west, as far as the Pacific, countless additional tribes are named, but there is no color coding. Some of the information here mostly likely derives from the Albert Gallatin map of 1836, but the present map is far more detailed identifying many more American Indian nations.

The map exhibits the full claims of the short-lived Republic of Texas one year before Annexation in the United States (1845). Texas's original territorial claims extended from the Rio Grand (Rio de Norte) to the Sabine River, then from the Gulf of Mexico to the Red River as far as the 100th parallel, at which point, it runs directly north to the Arkansas river, which it follows to its source in the Rocky Mountains. Although Texas claimed extensive territory, the republic never property controlled the extensive claims, mostly in modern day New Mexico, between the River Nunces and the Rio Grande. Nonetheless, when Texas joined the United States these claims were honored and were one of the factors that led to the Mexican American War (1846 - 1848). Maps illustrating the Republic of Texas are rare, as it only existed for a short 10-year period. Moreover, when maps do illustrate the republic, they political sympathies are always evident, as few mapmaking nations officially recognized the Republic of Texas' full claims.

South of the 1819 Adams–Onís Treaty or Transcontinental Treaty line, in what was then Mexico, the Great Salt Lake, identified as Timpanagos, is described as 'doubtful' and the territory to the west simply as 'Unexplored.' In this same area the speculative Rio de S. Bueneventuro is also identified.

This map was issued in London to accompany Edward Marsh's Some Account of the Conduct of the Religious Society of Friends Towards the Indian Tribes in the Settlement of the Colonies of East and West Jersey and Pennsylvania. It was drawn by James Bowden and engraved by B. Clark. Today this map is uncommon on the market and often underappreciated.

James Bowden (1811 – March 1887) was a British historian and author connected to the Society of Friends, or Quakers. Bowden was born in Liskeard, Cornwall, England and died in Stroud, Gloucestershire, England. Most of his work is associated with the Quakers, including a History of the Society of Friends in America.


H. Clark (fl. c. 1840 - 1850) was an English lithographer active in London during the middle part of the 19th century. Clark's address was 9 Pancras Lane, London. He may have been associated with the Quakers or the Society of Friends.

Marsh, E., Some Account of the Conduct of the Religious Society of Friends Towards the Indian Tribes in the Settlement of the Colonies of East and West Jersey and Pennsylvania: With a Brief Narrative of their Labours for the Civilization and Christian Instruction of the Indians, From the Time of their Settlement in America to the Year 1843 (London : Marsh) 1844.