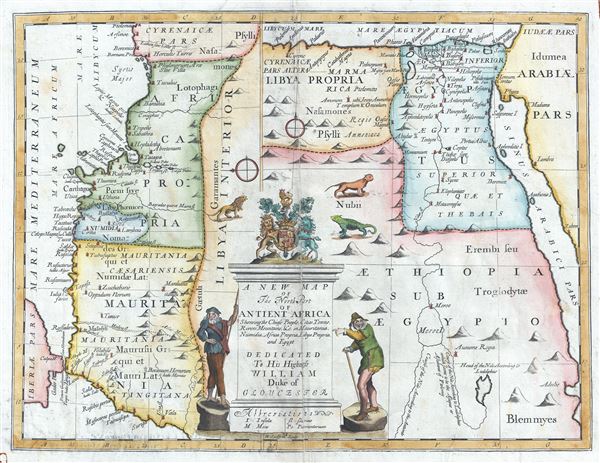 This is an uncommon and beautiful 1712 map of the northern part of Africa in ancient times by Edward Wells of Oxford. This interesting map depicts the northern coastlines of Africa with an unusual orientation, with the eastern part of the coastline from Morocco to Cyrenaicae (Libya) featured on the left half of the map oriented to the east and western parts of the coastline from Libya to the Red Sea featured on the right side of the map oriented to the north. Throughout, the map notes several towns, cities, rivers, mountains and other topographical features. Many ancient cities are identified, including Thebes, Memphis, Babylon, Meroe and others.

Near the split of the White and Blue Nile, Wells identifies the ancient Island of Meroe, where little known by magnificent pyramids were built in imitation to the Egyptian work in Giza. The cartographer also notes two courses of the Nile, one according to Ludolphus following Ptolemaic traditions, and another according to the ancients. Herodotus writes about Meroe;

After having passed through this country in the forty days which I have said, you will embark again in another vessel and sail for twelve days; and after this you will come to a great city called Meroe. This city is said to be the mother-city of all the other Ethiopians: and they who dwell in it reverence of the gods Zeus and Dionysos alone, and these they greatly honour; and they have an Oracle of Zeus established, and make warlike marches whensoever this god commands them by prophesyings and to whatsoever place he commands.

Possibly the map's most interesting aspect is the 'labirinthus' near modern day Hawara. The lost Labyrinth was described by many classical authors including Herodotus, Strabo, Diodorus and Pliny. A sprawling megalithic complex designed by Imandes for the Pharoh Amenemhet III, the Labyrinth is believed to have contained thousands of rooms filled with hieroglyphs and ancient Egyptian sculptures. Herodotus wrote about it in the fifth century B.C.:

Furthermore, they resolved to leave a memorial of themselves in common, and in pursuance of this resolve they made a labyrinth, a little above Lake Moeris, and situated near what is called the City of the Crocodiles. I saw it myself and it is indeed a wonder past words; for if one were to collect together all of the buildings of the Greeks and their most striking works of architecture, they would all clearly be shown to have cost less labor and money than this labyrinth. Yet the temple at Ephesus and that in Samos are surely remarkable. The pyramids, too, were greater than words can tell, and each of them is the equivalent of many of the great works of the Greeks; but the labyrinth surpasses the pyramids also. It has 12 roofed courts, with doors facing one another, 6 to the north and 6 to the south and in a continuous line. There are double sets of chambers in it, some underground and some above, and their number is 3,000; there are 1,500 of each. We ourselves saw the aboveground chambers, for we went through them so we can talk of them, but the underground chambers we can speak of only from hearsay. For the officials of the Egyptians entirely refused to show us these, saying that there were, in them, the coffins of the kings who had built the labyrinth at the beginning and also those of the holy crocodiles. So we speak from hearsay of these underground places; but what we saw aboveground was certainly greater than all human works. The passages through the rooms and the winding goings-in and out through the courts, in their extreme complication, caused us countless marvelings as we went through, from the court into the rooms, and from the rooms into the pillared corridors, and then from these corridors into other rooms again, and from the rooms into other courts afterwards. The roof of the whole is stone, as the walls are, and the walls are full of engraved figures, and each court is set round with pillars of white stone, very exactly fitted. At the corner where the labyrinth ends there is, nearby, a pyramid 240 feet high and engraved with great animals. The road to this is made underground

.Several archeological surveys have been undertaken to unearth the labyrinth, but so far no findings have been confirmed.

A large title cartouche is included in the bottom of the map featuring two men and the coat of arms of the Duke of Gloucester, a lion, a lizard and another animal. This, like many other Wells maps, is dedicated to Prince William, Duke of Gloucester and son of Queen Anne, who, when this map was being prepared, was a student at Oxford. Engraved by R. Spofforth and published by T. Bonwicke for the 1712 edition of Edward Wells' Atlas, A New Sett of Maps both of Ancient and Present Geography.