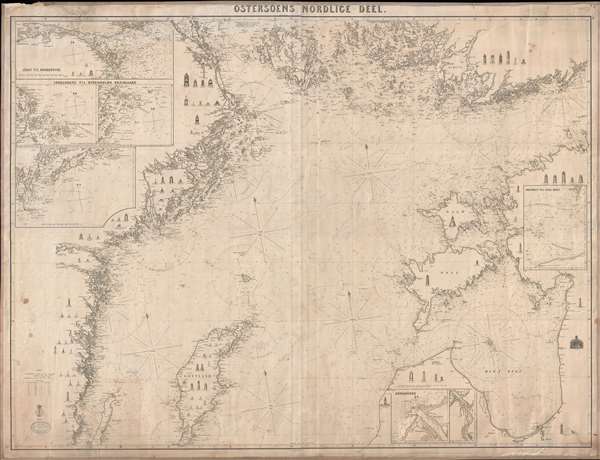 Extremely rare nautical chart of the Baltic Sea near Stockholm!
$1,500.00

This is an extremely rare 1871 nautical chart or maritime map of norther part of the Baltic Sea in the vicinity of Stockholm, Sweden. The map cover from Gotland to the Åland Islands, and from the Swedish coastline to Riga, Latvia. Stockholm appears prominently just left of center. This chart is admirable for its profile illustration of the region's many lighthouses. There are inset detail harbor maps of Norrköping (Sweden), entrances to Stockholm (Sweden), Daugavgrīva (Latvia), Riga (Latvia), and Riga Bay.

The chart was published by the Royal Danish Chart Archive, first in 1869, and again here, with updates to 1871. This map is extremely rare and we have been unable to identify any examples in any collection, public or private. The chart is owned jointly by Geographicus and Vetus Carta Maps.