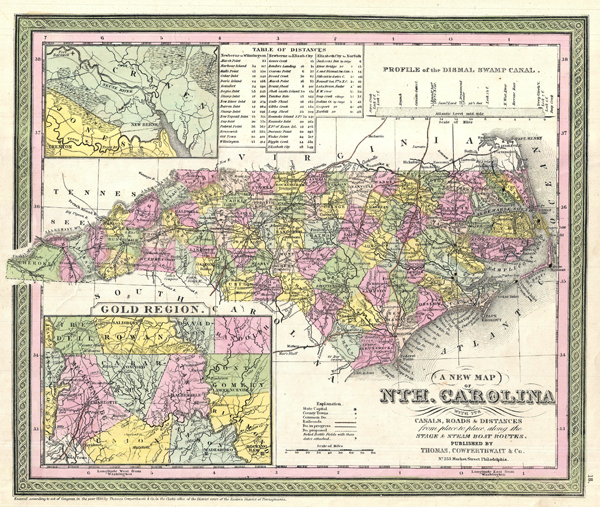 A fine example of Samuel Augustus Mitchell's important 1850 map of North Carolina. This map shows cities, topographical features, railways, ferries and roads with color coding at the county level. In addition to cartographic information this map is full of practical data for the armchair traveler including a profile of the Dismal Swamp Canal (an important trade artery in the region), a Table of Distances, insets of the vicinity of New Berne and the Carolina Gold Region.

Cartographically this map is based on the earlier work of Tanner though it has been updated with new information as well as Mitchell's distinctive decorative border and color scheme. Published as plate no. 18 in the 1850 edition of Mitchell's New Universal Atlas. Dated and copyrighted: 'Entered according to Act of Congress in the year 1850 by Thomas Cowperthwait & Co. in the Clerk's Office of the District Court of the Eastern District of Pennsylvania.'