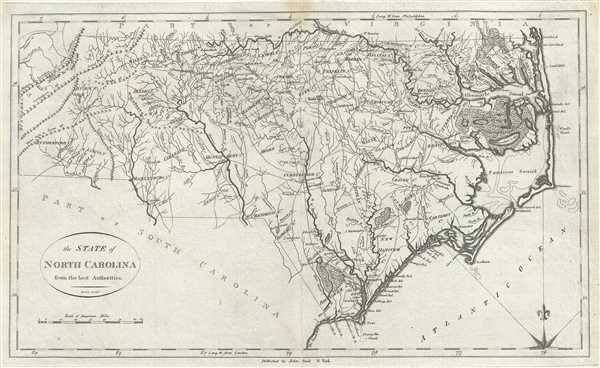 Cartographically this map is derived from Samuel Lewis / John Carey map of 1795. Like the first state of the Lewis/Carey map, this particular map notes various counties, but does not delineate them. The map does however outlines the Moravian community boundaries (Wachovia Tract) which corresponds to the area around the present day county of Forsyth.

This map was engraved by Benjamin Tanner. It was issued to accompany Reid's important An American Atlas.

George A. Reid (fl. c. 1900 - 1940) was a Scottish printer and bookseller active in Edinburgh during the first half of the 20th century. Reid published an Edinburgh directory as well as a number of Masonic titles, suggesting an affiliation with the Scottish Rite. Reid maintained his offices at 53 Elder St., Edinburgh. Learn More...