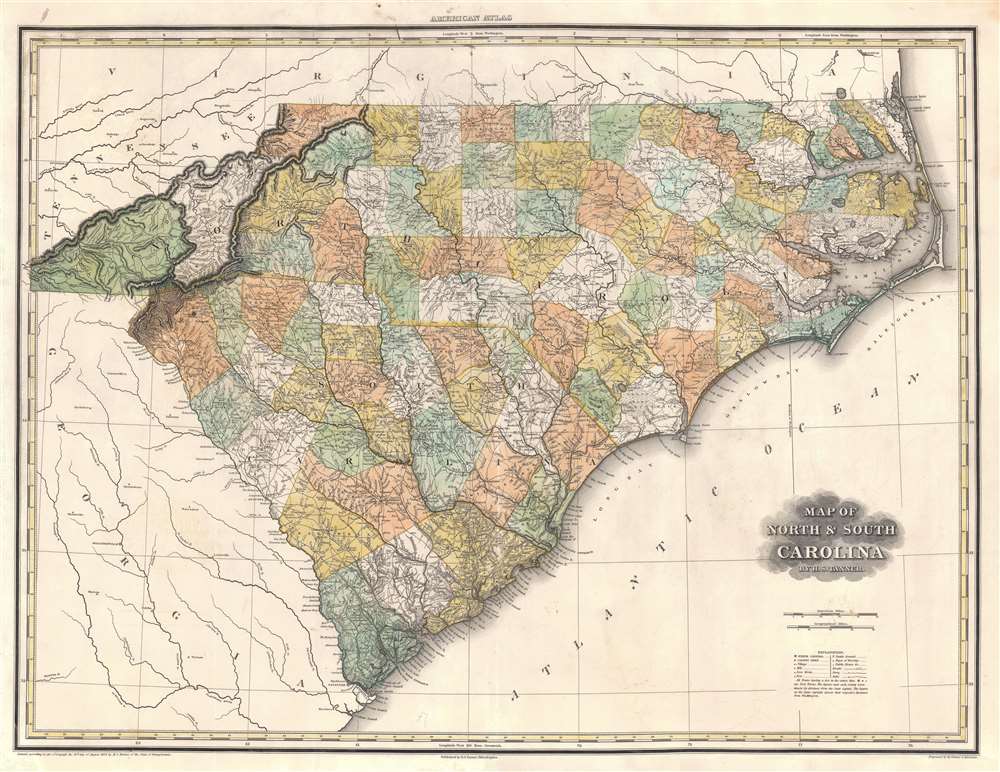 A rare and important 1823 first edition Henry Schenck Tanner map of North Carolina and South Carolina. Also included are adjacent parts of Georgia, Tennessee, and Virginia. When this map was illustrated, it represented the finest atlas map of these states then obtainable. It includes a wealth of important firsts, such as the addition of Haywood county (founded in 1808). In addition, it features an impressive richness of detail, naming mills, iron works, forts, battle grounds, places of worship, public houses, roads, ferries, and falls. The map remained definitive until new more details maps were produced after the American Civil War.

This map was published by Tanner in 1823 edition of his iconic New American Atlas. A second edition was produced in 1825. This map, like all maps from the New American Atlas, is today rare to the market but is well represented in institutional collections.

Tanner, H.S., A New American Atlas, (Philadelphia: Tanner) 1823.     Tanner's New American Atlas is regarding as the largest and most beautiful early American atlas, truly a landmark achievement from the Golden Age of American Cartography. The atlas was initially published in five parts between 1819 and 1823, after which collected editions were issued in 1823, 1825, 1833, and 1839. It terms of size, format, printing quality, paper quality, cartographic accuracy, and elegance of engraving, the New American Atlas was unparalleled. As noted by map historian Walter Ristow, 'Tanner's atlas raised U.S. commercial map production to a new level of excellence.' His contemporaries were also duly impressed. The American educator and historian Jared Sparks, as quoted by Ristow, describes the atlas as thus: