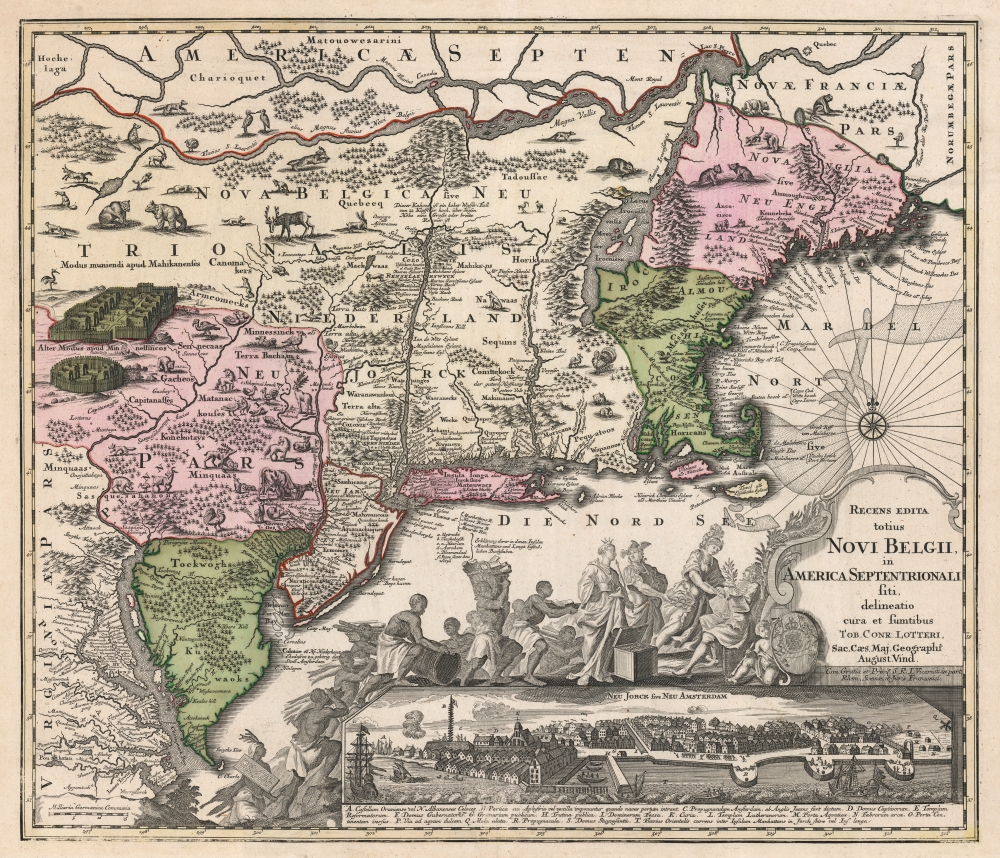 This is Conrad Tobias Lotter's 1757 map of New York, New England, and the mid-Atlantic colonies. It represents final map in the Jansson-Visscher series. Despite the map's cartography being over a century old, this map continued to capture the idea of this part of the world for Europeans in general and a German audience in particular.

Coverage extends from the Chesapeake Bay to modern-day Maine, and from the St. Lawrence River to the James River. The map follows on the long legacy of the Jansson-Visscher series, inheriting cartographic conventions dating to 1651. This map significantly updates the series with the naming of Boston and is the first in the series to do so (albeit misspelled as 'Briston' in this state) but otherwise follows the triumphs and errors of its predecessors.

As noted, the present map represents the final iteration of the Jansson-Visscher Series. The series originated with the 1651 Jansson Belgii Novi, Angliae Novae, Et Partis Virginiae Novissima Delineatio. This so-called 'prototype' map was the first iteration of the dominant mapping of the New England and Mid-Atlantic well into the eighteenth century. It was first to approximate Manhattan and Long Island. It was also the first map to show Swedish settlements along the Delaware, and the first reasonably well-informed compendium of regional Native American settlements.

The view of New York decorating the lower right hand corner of the map is not the so-called 'Visscher View' that embellished the earlier maps of this type. Instead, this view is from the 1674 second state of the Allard map, termed the 'Restitutio View' for its celebration of the re-occupation of New Amsterdam by the Dutch in 1673. This view is notable not only for its ironies (the Dutch would return the port to the English in exchange for their recognition of Dutch claims to Surinam a scant year later) but for its early depiction of the palisade that would give Wall Street its name. The letter key below the view also marks the city's shoreline defenses, the location of the collect pond and its (then) fresh water, the Dutch Reformed Church, and the Stuyvesant mansion.

Although Seutter's map preserved the Restitutio View, it did not reprise that map's decorative work, instead presenting a new allegorical cartouche. Here, in the baroque style, King George II is depicted enthroned. Athena (goddess of wisdom in war) presents the king with a laurel and a baton, signs of victory. Hera, (queen of the gods) stands over a chest full of coin, while Hermes (patron of communication and commerce) gestures with his caduceus, indicting that the wealth ought to be directed towards the English King. Meanwhile, a crowd of African figures laboriously carry goods to present to the King, a reference to the fact that the British colony was powered by slave labor.

This map was engraved by Matthias Seutter in 1730. When Lotter inherited a share of the firm after Seutter's death in 1757, he amended the cartouche with his own imprint, and continued to include the map in his own atlases. This is an example of the fourth state according to Tooley, with Lotter's imprint and the inclusion of the misspelled 'Briston.' We see twenty examples of this map cataloged in OCLC, in a variety of states.

The present example, from a side-bound atlas, has no centerfold and is particularly fine. If you are considered an example of this map for your collection, this is the one you want.


Matthäus Seutter (1678 - 1757) was one of the most important and prolific German map publishers of the 18th century. Seutter was born the son of a goldsmith but apprenticed as a brewer. Apparently uninspired by the beer business, Seutter abandoned his apprenticeship and moved to Nuremberg where he apprenticed as an engraver under the tutelage of the prominent J. B. Homann. Sometime in the early 1700s Seutter left Homann to return to Augsburg, where he worked for the prominent art publisher Jeremiad Wolff (1663 - 1724), for whom he engraved maps and other prints. Sometime around 1717 he established his own independent cartographic publishing firm in Augsburg. Though he struggled in the early years of his independence, Seutter's engraving skill and commitment to diversified map production eventually attracted a substantial following. Most of Seutter's maps are heavily based upon, if not copies of, earlier work done by the Homann and De L'Isle firms. Nonetheless, by 1731/32 Seutter was one of the most prolific publishers of his time and was honored by the German Emperor Karl VI who gave him the title of Imperial Geographer, after which most subsequent maps included the Avec Privilege designation. Seutter continued to publish until his death, at the height of his career, in 1757. Seutter had two engraver sons, Georg Matthäus Seutter (1710 - 173?) and Albrecht Carl Seutter (1722 - 1762). Georg Matthäus quit the business and relocated to Woehrdt in 1729 (and probably died shortly thereafter), leaving the family inheritance to his wastrel brother Albrecht Carl Seutter, who did little to advance the firm until in own death in 1762. Following Albrecht's death, the firm was divided between the established Johann Michael Probst (1727 - 1776) firm and the emerging firm of Tobias Conrad Lotter. Lotter, Matthäus Seutter's son-in-law, was a master engraver and worked tirelessly on behalf of the Suetter firm. It is Lotter, who would eventually become one of the most prominent cartographers of his day, and his descendants, who are generally regarded as the true successors to Matthäus Seutter. (Ritter, M. Seutter, Probst and Lotter: An Eighteenth-Century Map Publishing House in Germany., "Imago Mundi", Vol. 53, (2001), pp. 130-135.) Learn More...


Hugo Allard (1627-1684) was a Dutch draughtsman, engraver and painter, who worked in Tournai and Amsterdam. His son Carel, (1648-1709) carried on the same trade. Most of his own maps were sold as separate publications, or were collected in composite atlases; consequently they tend to be works of great rarity. Learn More...