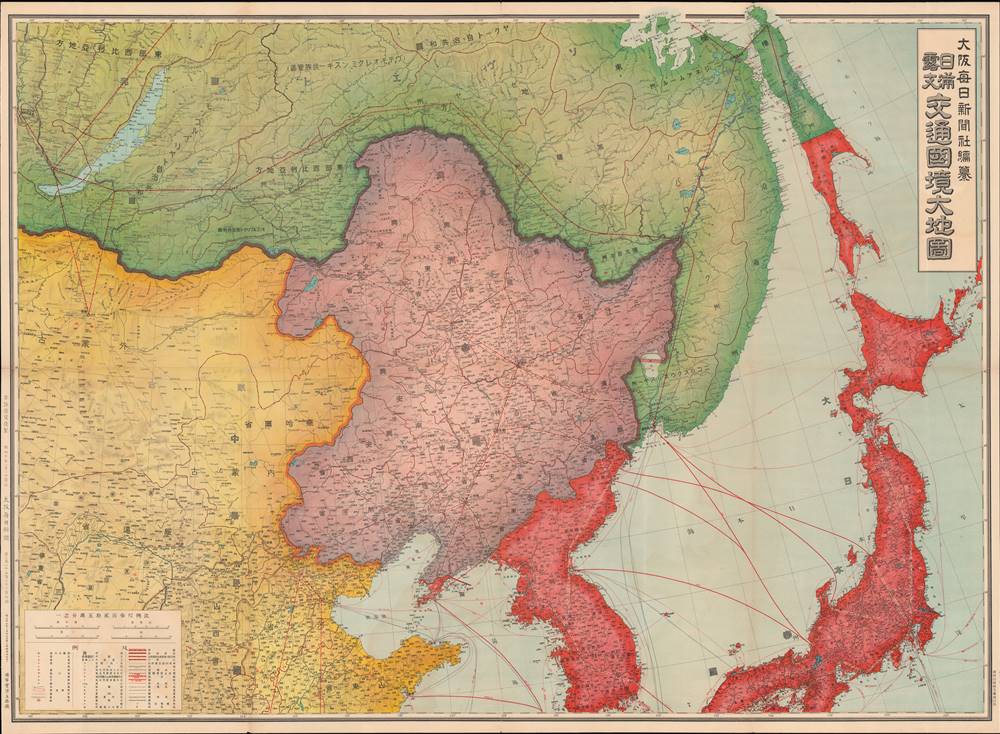 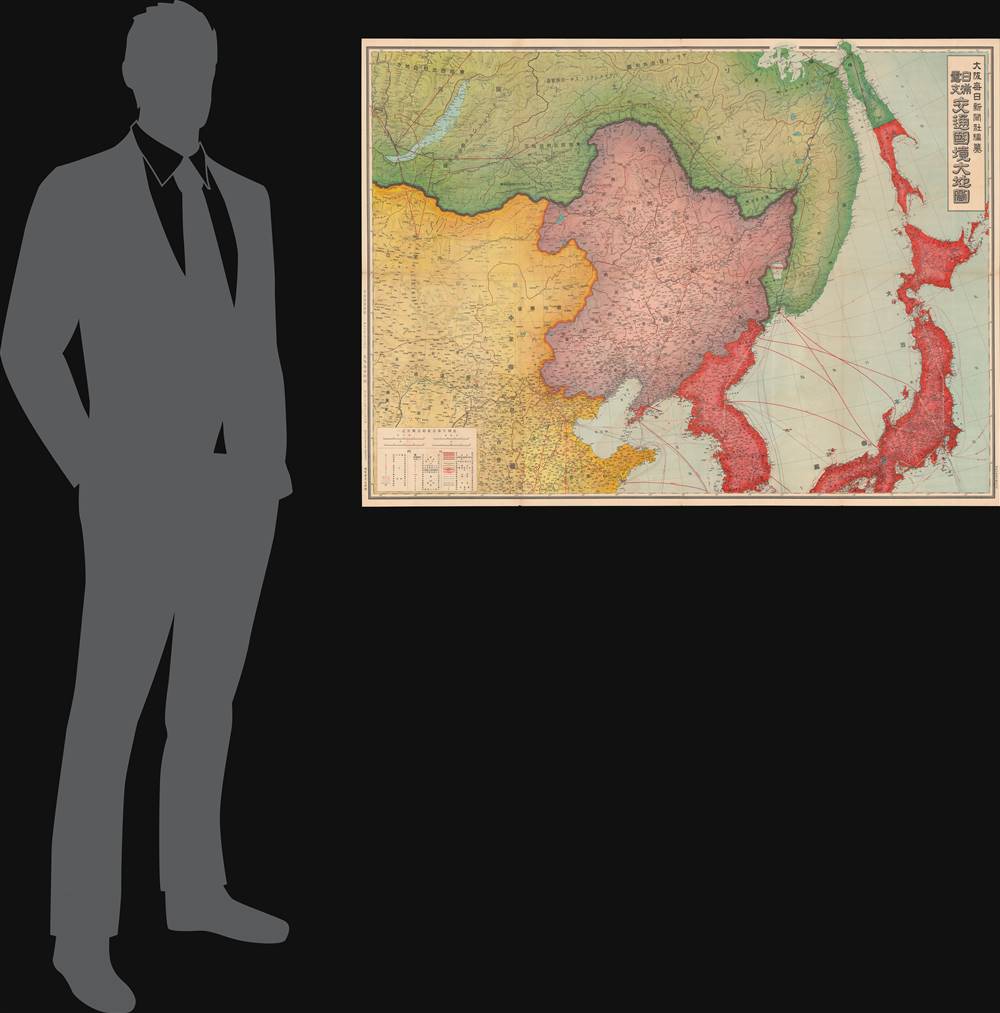 Japan's Expanding Empire on the Eve of the Second-Sino Japanese War.

This is a large 1935 map of Northeast Asia (Japan, Korea, Manchuria, northern China, Mongolia, Siberia) that appeared in the Japanese newspaper, Osaka Mainichi Shimbun. It is designed to highlight transportation and communication lines connecting Japan's empire at a time when the empire was expanding and Japan's domestic politics were moving towards militarism.

The map is immediately notable for its size, colorful presentation, and level of detail (even small cities and towns are noted). The sheer size of Manchuria (Manchukuo), compared to Japan and Korea, and the relative paucity of infrastructure underscores the importance of the railways (dashed red lines). By the end of the decade, the railways in Manchuria would be linked to an expanding North China network managed by an offshoot of the South Manchurian Railway Co. (Mantetsu), the main engine of Japanese imperialism in Manchuria.

The Treaty of Portsmouth that ended the Russo-Japanese War (1904 - 1905) granted to Japan, among other rights, the southern section of the China Eastern Railway, from Changchun to Port Arthur (Lüshunkou), which became known as the South Manchuria Railway. The company created to manage the southern section, the South Manchuria Railway Company (南滿洲鐵道株式會社), soon developed into a mega-conglomerate, akin to the chartered corporations of early modern Europe. The company oversaw hotels, mines, mills, power plants, publishing, and much more, that expanded Japanese influence in Manchuria to the point that it became a virtual colony. By the 1930s, Mantetsu was the largest company in Japan and by itself formed a significant portion of the Japanese economy.

Although Japan already exercised an informal empire in much of Manchuria, the territory was still under the control of a group of Chinese warlords known as the Fengtian Clique led by Zhang Zuolin (referred to here as the Chang regime, warlords, or feudalistic government). Meanwhile, a sizable Japanese garrison occupied the southern portion of the Liaodong Peninsula, known as the Kwantung Army (or Kantō-gun in Japanese).

The Kwantung Army was a hotbed ultranationalism, militarism, and anti-democratic secret societies, and produced several of Japan's future wartime leaders, including Tōjō Hideki. Although the Kwantung Army had initially supported Zhang Zuolin as a bulwark against Chiang Kai-Shek, who was seen as pro-Communist, he was assassinated in 1928 when a bomb exploded under his private train while it was traveling on the South Manchuria Railway; the plot had been hatched by junior officers in the Kwantung Army. Zhang was succeeded by his son, Zhang Xueliang, who was seen as a playboy and feckless military commander, but who later became a national hero for his opposition to Japanese imperialism.

Three years later, on September 18, 1931, a group of Kwantung Army officers staged a false flag incident (another bombing along the South Manchuria Railway) to provide a pretext for invading and occupying Manchuria. Although Japan's political leaders and likely even the military leadership was unaware of the invasion plot, they did not force the Kwantung Army to retreat despite international condemnation because the invasion was extremely popular domestically and was a convenient solution to Japan's long-term problems with resource constraints and overpopulation.

Rather than make Manchuria a formal colony, as with Taiwan, or annex it outright, as with Korea, a puppet regime was established. It was led by the last emperor of the Qing Dynasty, Aisin Gioro Puyi, who had been living in the Japanese Concession in Tianjin. Puyi had expressed his desire to be re-enthroned. Also, he had support from the now-minority population of Manchus, who felt discriminated against in China after the 1921 Qing collapse. After being denounced as a traitor by the Chinese, Puyi was smuggled out of Tianjin in the trunk of a car and conveyed to Manchuria, where he became the nominal head of the new state.

A vast, sparsely populated region that was tremendously rich in resources, Manchuria became a wild, violent, multiethnic imperial frontier in some ways akin to the American Old West. Forced labor was employed on a mass scale under brutal conditions. All manner warlord troops, bandits, and rebels were present in Manchuria following Japan's invasion, and extremely harsh methods were used to suppress resistance. A special military unit (Unit 731) even engaged in horrific experiments on living subjects (often captured rebels and enemy troops, though also randomly selected civilians), such as biological weapons, chemical warfare, and vivisection.

Despite the creation of a government led by Manchus and other non-Han ethnic groups for Manchukuo, real power rested with Japanese military officers, bureaucrats, and the South Manchuria Railway. Manchukuo quickly became a steppingstone to further Japanese aggression throughout China, just as Korea had been a steppingstone to Manchuria.

By the time this map was made, Japan's only potential rival in Northeast Asia was the Soviet Union. Japanese propaganda constantly emphasized the risk that Communism posed to the empire and especially its interests in China, exaggerating the strength of the Chinese Communists and insisting that Chiang Kai-Shek was a closet Communist. As China was only weakly unified by a national government led by Chiang based in Nanjing, Japan was able to use anti-Communism as a pretext for instigating 'incidents' that were used to justify military interventions.

Most notably, a mini-war in 1933, known as Operation Nekka in Japanese and the Defense of the Great Wall in Chinese, resulted in the expansion of Manchukuo up to the Great Wall and the establishment of a demilitarized zone extending 100 kilometers south of the Great Wall, effectively leaving Beijing (known at this time as Beiping) undefended. In 1935, the He-Umezu Agreement led to a withdrawal of Chinese forces from the entirety of Hebei Province.

The discontent of ethnic minorities in China, particularly the Mongols, was also a convenient tool to exploit, and by 1936 a Japanese-aligned government was established in Inner Mongolia. Thus, by the end of 1936, Japan already controlled most of northern China through puppet regimes.

The Domestic Turn towards Militarism

The origins of Japanese militarism and ultra-nationalism can be traced at least to the Meiji Restoration and lie primarily with the threat posed by secret societies and the military, especially the Kwantung Army. As was the case internationally, liberalism was discredited in the interwar period, though in Japan anti-liberalism took the form of militarists seeking an imperial 'restoration' beyond that already achieved in 1868; in other words, the dissolution of civilian government and the constitution, in favor of an autocratic system where the emperor dictated all major decisions.

Several leading political and financial figures were assassinated by far-right extremists in the 1920s and 1930s, most notably Takashi Hara, who was killed in 1921 at Tokyo Station, and Inukai Tsuyoshi, who was killed in a failed coup attempt by ultra-nationalistic junior army officers in May 1932. Several other attempted coups failed, most dramatically the February 26 (1936) Incident, which saw open warfare in the streets of Tokyo between pro-government and pro-revolution factions of the military. In the end, while these plots failed, the military came to have greater control over politics (to the extent that the civilian government effectively dissolved in 1940) and the threat of a coup moved the country's policies closer to those desired by the ultra-nationalists.

This map was published as an addendum to the January 1, 1935 new year's edition of the Osaka Mainichi Shimbun. It was printed by the Seiban Printing Company (精版印刷株式會社). It is only known by us to be held by the National Diet Library in Japan and the National Library of Australia, and it is scarce to the market.

Good. Some wear and loss along fold lines and edges.