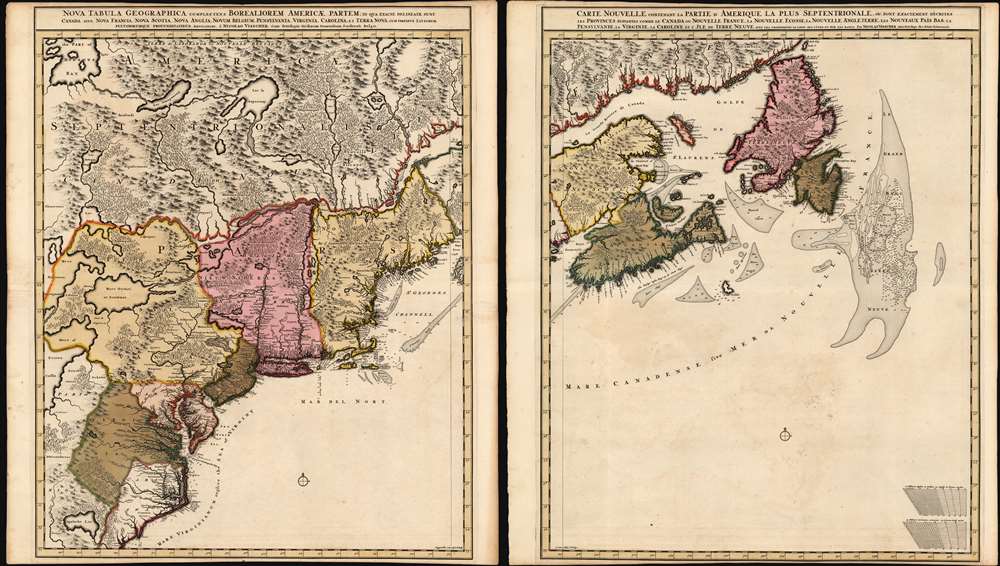 Most Finely Detailed Dutch Map of the Northeast from the 17th Century.
$6,500.00

This is Nicolas Visscher II's 1696 two-sheet map of the North American eastern seaboard and the Canadian Maritimes, in a beautiful example of its earliest acquirable state with rich original color. It represents the 17th century's most finely-detailed mapping of the coast from the Carolinas to Labrador. Also, it is the first Dutch map of the region to diverge from the 'Jansson-Visscher' precursor maps.

The two sheets focus on the North American colonies of France and Great Britain - not least among them the former Dutch colony of New Netherlands (New York), which retains its Dutch name along with its new English appellation of 'New Jork.' In further acknowledgement of the increase of English influence, details in Long Island and New England (such as Eastham Cut in Cape Cod) show evidence of consultation with English charts of the period. The map is rich with indigenous tribal names in the largely unexplored interior, while the coastline is populated with European place names. The coastal regions are, more precise and recognizable than earlier Dutch works although the interior is still largely imaginary. Lakes Champlain and George still appear north of the Connecticut River, far to the east of their proper location north of the Hudson. Lakes Ontario, Huron and Erie are distorted. The mythical Appalachian Lake (a holdover from the Le Moyne map of 1691) still appears upriver from Craven County in the Carolinas.

In comparison with earlier Dutch maps of the Northeast and Canada, this work reveals the steady advance in the arts of engraving and printing. Presses were getting larger, as is evidenced by the larger-format copperplates employed. Moreover, the engraving itself is finer than maps produced earlier in the century, allowing for sharper detail and smaller, more legible text. The pictorially rendered wooded areas and mountains, the sharply-hachured coastlines, and the finely-stippled shallows proclaim the skill of the engraver (Luggert van Anse). This work also represents a stylistic shift from its precursors. The animals and depictions of Native Americans that fill the interior spaces on earlier Dutch works are here absent. In lieu of speculative lakes and river systems, the sea is left clear and open, with no ships or monsters. Each sheet graced with a single elegant and understated compass rose.

This map was engraved by Luggert van Anse in and around 1696 for inclusion in the younger Visscher's Atlas Minor. Burden has identified two examples of a first, 'proof state' of the map lacking mountains or trees. The present example exhibits these elements but lacks the Schenk imprint appearing in 1717, and thus we identify it as a c. 1696 second state, the earliest acquirable to the collector. The map, both as a pair and in its separate sheets, is reasonably well represented in institutional collections.


Luggert van Anse (fl. 1677-1716) was a Dutch map engraver, who worked in the shops of Visscher, van Keulen, and Pieter Husson. He appears to have been prolific, but as is often the case with Dutch engravers employed by larger printers or publishers, he would have been considered more of a workman than an artist, and consequently his education and early life are poorly documented. Learn More...

Very good. Both sheets trimmed close on top and bottom, but margins complete. Left sheet reinforced at areas of oxidation. Faint foxing in water area of right sheet. Else excellent with a bold, sharp strike and superb, rich original color. Approximate size is given for each sheet.