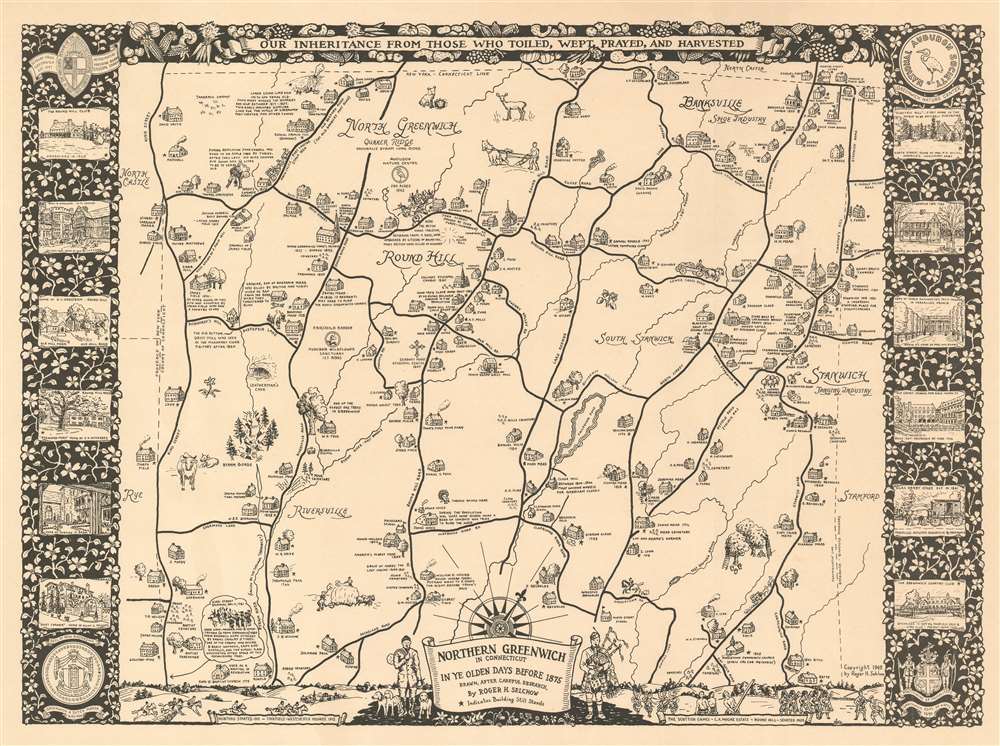 A rare pictorial map of the northern part of Greenwich, Connecticut issued in 1948 by Roger H. Selchow. This is a companion piece to an earlier 1939 map of coastal Greenwich issued by the same artist. Coverage extends roughly from what is today Route 1 north to the New York border, and from Rye to Stamford, including the communities of Round Hill, Riversville, Stanwich, North Greenwich, and South Stanwich.

By far, though, most of the notes highlight events that took place in the region during the American Revolutionary War. Selchow identifies which houses were plundered and burned by the British, and the site of the December 4, 1781 King Street Skirmish. Other more quirky sites include the home where Mrs. Issac Howe 'scared away a band of cowboys' and the place where 'Israel Putnam went to dance before Tyron's Raid.'

Apart from facts concerning the Revolution, illustrations of fences, flowers, trees, horseback riders, farmers, and wildlife provide pictorial charm. Labeled roads snake their way across the map. The whole is surrounded by a pictorial border decorated with farm crops at top and rolling hills at bottom. Vignettes of historical buildings appear on either side of the map proper - many of which still stand. These include the Greenwich Country Club, the Round Hill Club, the Isaac Stokes mansion, and the first electrified house in the United States, Edward H. Johnson's 'Electric Hill', among others.

Drawn and published by Roger Selchow, this map is exceedingly rare. Only two other examples are known, one held in the Library of Congress and a second in the Beinecke Rare Book Room at Yale.