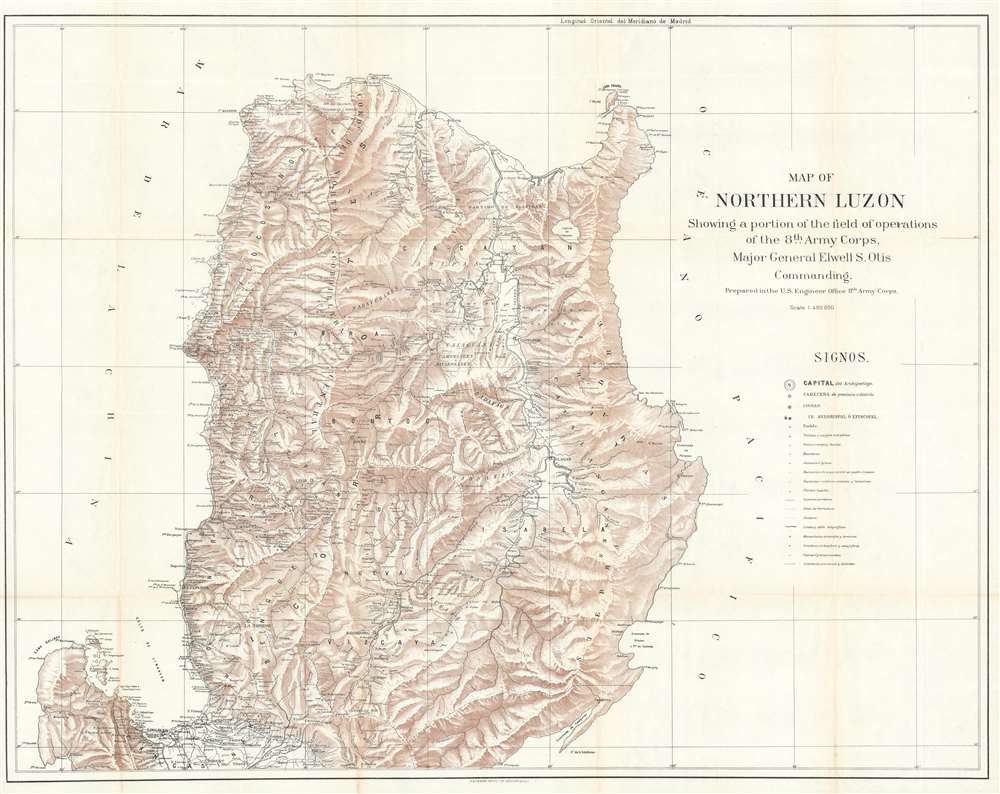 This is an extremely rare map of Northern Luzon, the Philippines, issued at the height of the Philippine-American War (1899 – 1902) by the Military Governor in the Philippines, Major General Elwell Stephen Otis, and the 8th Army Engineering Corps. This map is one of the largest and most detailed cartographic productions to emerge from the Philippine-American War. It depicts the northern part of Luzon from the Gulf of Lingayen and Pangasinan north to Cabo Engaño and Pta. Mayraira, an area controlled mainly by Philippine forces during the early stages of the war. The map offers detailed topography throughout via shading, identifies roadways, towns, cities, political boundaries, telegraph lines, and more. It appears to have been based upon Spanish sources, as some of the place names and the map key are in Spanish.

The Philippine-American War lasted from February 4, 1899, until July 2, 1902, when the Philippine Organic Act established the Second Philippine Commission and Philippine legislature. The war immediately followed the Spanish-American War, once the Filipinos realized that the Americans were in the islands to stay. Estimates of Filipino civilian casualties vary wildly, from at least 200,000 to over one million, the majority of which were caused by famine and disease. Armed resistance to the U.S. occupation of the Philippines continued as a guerrilla insurrection in many parts of the archipelago until June 1913. The U.S. passed the Tydings-McDuffie Act, also known as the Philippine Independence Act, in 1934. This law created the Commonwealth of the Philippines, increased self-governance, and scheduled Philippine independence for 1944. World War II delayed this process, and the U.S. did not grant full independence to the Philippines until 1946.

This map was prepared by the 8th Army Engineering Corps on the order of Major General E. S. Otis. It was printed by A. B. Graham Photo Lithography of Washington D. C. Three examples are cataloged in OCLC and are part of the institutional collections at Michigan State University, the University of Chicago, and the University of California Davis.

Andrew B. Graham (1845 - September 9, 1909) was an American lithographer active in Washington, D.C. in late 19th and early 20th century. Graham was born in Washington D.C., the son of a lithographer and engraver. After college, he joined the U.S. Coast Survey, where he was a draftsman until 1889. He retired from the Coast Survey to take over management of his father's lithography firm. The firm, Andrew B. Graham Company, was one of several that thrived on lucrative government publication contracts. Graham died of 'brain fever' in his Washington D. C. residence on September 9 of 1909. Some of his work was republished posthumously until about 1917, and his firm was active until at least the early 1920s. Learn More...