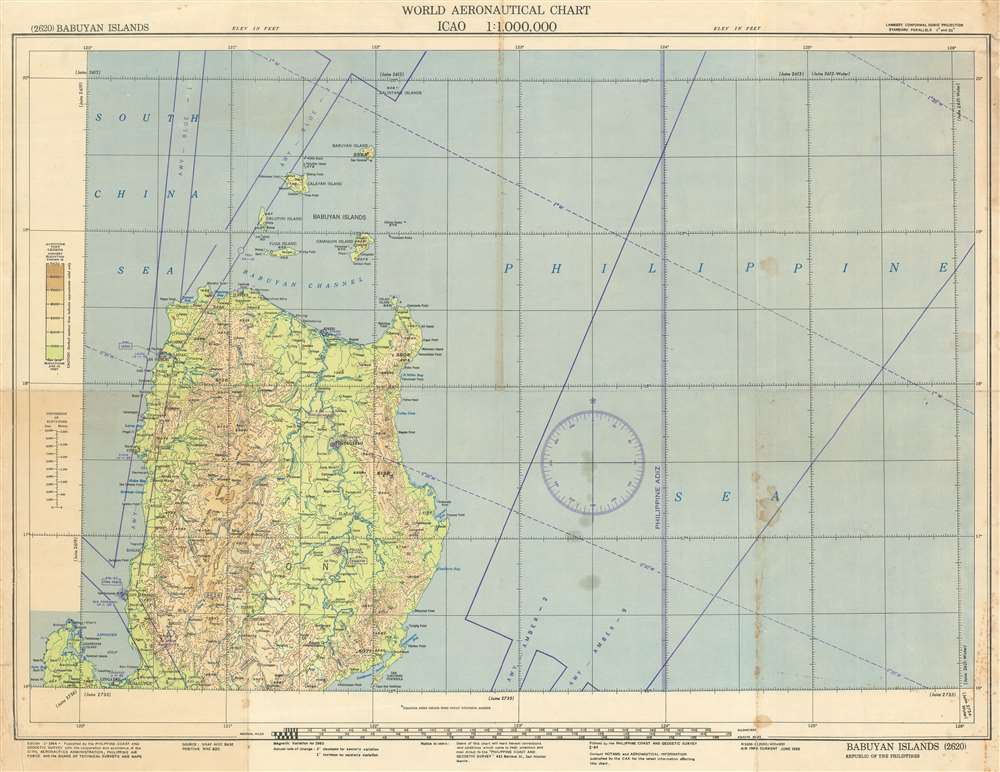 An aeronautical chart detailing northern Luzon and its airways.
$250.00

This is a 1964 Philippine Coast and Geodetic Survey aeronautical chart or map of northern Luzon and the Babuyan Islands. TAhe map covers the region from the Balintang Islands south to Lingayen, and northern Luzon's topography is illustrated in detail. Airways, abbreviated 'AWY', are printed in blue. An airway is defined as a corridor that connects one location to another at a specified altitude.

This map was created and published by the Philippine Coast and Geodetic Survey in 1964.

The Philippine Coast and Geodetic Survey (P.C.G.S) (1900 - 1942; 1945 - Present) began in 1900 as a branch of the United States Coast and Geodetic Survey to complete a comprehensive sruvey of the entire Philippine Archipelago. A local office of the U.S.C.G.S. was estalished in Manila and staffed by American field engineers, mathematicians, and cartographers, although the local Philippine government paid most of the costs. Service in the Philippines became an important step in the careers of U.S.C.G.S. officers in the years leading up to World War II and were an unspoken requirement before important promotions in the home offices. The Japanese occupied the offices of the P.C.G.S. in 1942, imprisoned many of its members, and used its ship, the Research as a transport before the Americans destroyed it during the liberation of the archipelago. After the war, the U.S. Army reestablished the office in 1945 and in 1946 it was put under the jurisdiction of the Republic of the Philippines with Captain Andres Hizon as its first director. The U.S.C.G.S. helped establish the independent P.C.G.S. for the Republic of the Philippines, and of course it closely resembled its American cousin. In 1972 it officially became known as the Bureau of Coast and Geodetic Survey, absorbed the Board of Technical Surveys and Maps, and became the Philippine government's main charting and mapping agency. The Bureau of Coast and Geodetic Survey merged with three other agencies in 1987 to form National Mapping and Resource Informaion Authority, which is part of the national Hydrographic Office of the Philippines. Learn More...

Average. Exhibits heavy soiling and some toning. Wear along original fold lines. Blank on verso.
Looking for a high-resolution scan of this?