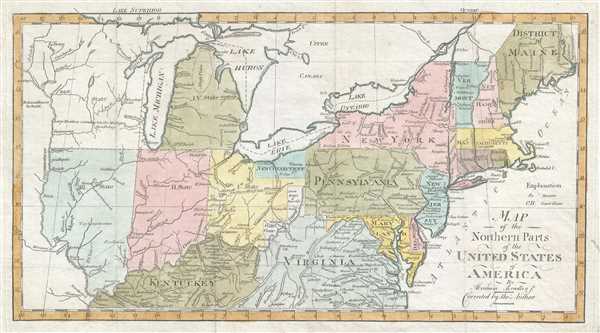 One of the earliest American maps to extend to the Mississippi. Illustrates early postal routes and the Connecticut Western Reserve.

This is a scarce and significant early 1802 postal route map of the northern parts of the United States illustrating postal routes and the five Jeffersonian states proposed by the Ordinance of 1789. The present example is the 1802 Jedidiah Morse issue of the northern part of Abraham Bradley's 1797 postal map of the United States – one of the most important maps in American history. It is one of the first American maps to extend west to the Mississippi River. It is also one of the first to address early colonization of the lands west of Pennsylvania, including Ohio.

Centered on Ohio's Connecticut Western Reserve, this map extends from the Mississippi River to the Atlantic, and From Lake Huron to Kentucky. While the eastern seaboard is interesting for its depiction of the nascent U.S. postal system, this map really comes to life west of Pennsylvania, where it illustrates the proposed Jeffersonian states of the Northwest Ordinance (1789). Although none of the states are named, just numbered, the preliminary borders of Ohio, Indiana, Illinois, Michigan, Wisconsin, and Minnesota are evident.

Early trade agreements and land settlement schemes are also noted. Among these are New Connecticut, also known as the Connecticut Western Reserve. This is a section of northeastern Ohio, rarely seen on maps, was ceded to Connecticut by King Charles II in exchange for Westmoreland County, Pennsylvania following the Yankee-Pennamite Wars. Connecticut gave up its claims to the Western Reserve in 1800. The claims were sold to the Connecticut Land Company, a group of speculators based in Suffield, Connecticut. Surveyors were sent out, under Moses Cleveland, to divided the reserve into township and found the city of Cleveland, here identified as 'New Salem.' The name was then changed to 'New Connecticut' as seen here.

Further south, the lands of the Ohio Company embrace the northern shore of the Ohio River between Marietta and the Grand Sandy River. The Ohio Company was a land speculation company based in Virginia. The Ohio Company received its royal charter in 1749. Settlement did ensue, but was not as profitable as might have been imagined. After the Northwest Ordinance, the Ohio Company lands became a district of Ohio. The Seven Ranges Townships, reflective of early survey efforts, appear just to the northeast.

The map further identifies various reserves, many of which would soon become the sites of major cities. These include Chicago, Rorias, Vincennes, Fort Wayne, Toledo, and Cincinnati, here identified as, 'Cincinnatus.' American Indian lands are also noted, particularly the Six Nations (Iroquois) on the eastern shores of Lake Erie, and the Chippewa near New Madrid.

The map exists in at least 2 states. In the first state, the title is slightly different, 'Northern Part' vs the present 2nd state, which reads, 'Northern Parts.' The two states are otherwise very similar.

Abraham Bradley, Jr (1767-1838) was an American lawyer, judge, and cartographer who served as assistant postmaster general for thirty years. Bradley was responsible for moving the federal post office from Philadelphia to Washington, D.C. and even hosted the national post office in his home for a period. He was employed under five different U.S. postmasters general and drew detailed and innovative maps of postal routes. Bradley, after having established his private law practice in 1788, briefly served as a county judge. There he became acquainted with Timothy Pickering, who was appointed by President Washington as postmaster general in 1791. Bradley served as his clerk, and began compiling information for a complete postal service map. Bradley's extensive knowledge of the department and the routes made him indispensable when Pickering was succeeded in 1795. Bradley is regarded as an influential figure in the early history of the Post Office. His postal routes and schedules were rigidly enforced for thirty years and gave the department a 'rapid and reliable engine for delivering information across vast distances'. Learn More...


Jedidiah Morse (August 23, 1761 – June 9, 1826) was an American geographer and minister active in Connecticut during the late 18th and early 19th centuries. Morse wan born in Woodstock, Connecticut and studied at Yale University, earning a M. A. in 1786. He advocated for better education for young women and founded a school to this end in New Haven in 1783. Morse was active in religious circles and often railed against the 'assaults of Unitarianism.' Nonetheless, it was as an advocate for women's education that Morse contributed the most to cartography. Recognizing a need for better textbooks, he published a series of geographies including Geography Made Easy (1784), American Geography (1789), and the Universal Geography of the United States (1797). His work with geographical textbooks earned him the informal title 'Father of American Geography.' He married Elizabeth Ann Finley Breese sometime after 1789, when he became a pastor in Charlestown, Boston, with whom he had several children. His eldest son, Samuel Finley Breese Morse (April 27, 1791 – April 2, 1872), was a noted painter and telegraphy pioneer (also a co-developer of Morse code). Some of his other children were Sidney Edwards Morse (February 7, 1794 - December 24, 1871), a noted geographer and inventor, and Richard Cary Morse (1795 - 1868), who helped his father with his geographical work and founded the New York Observer with his brother Sidney. Learn More...

Very good. Some foxing and soiling. Blank on verso.