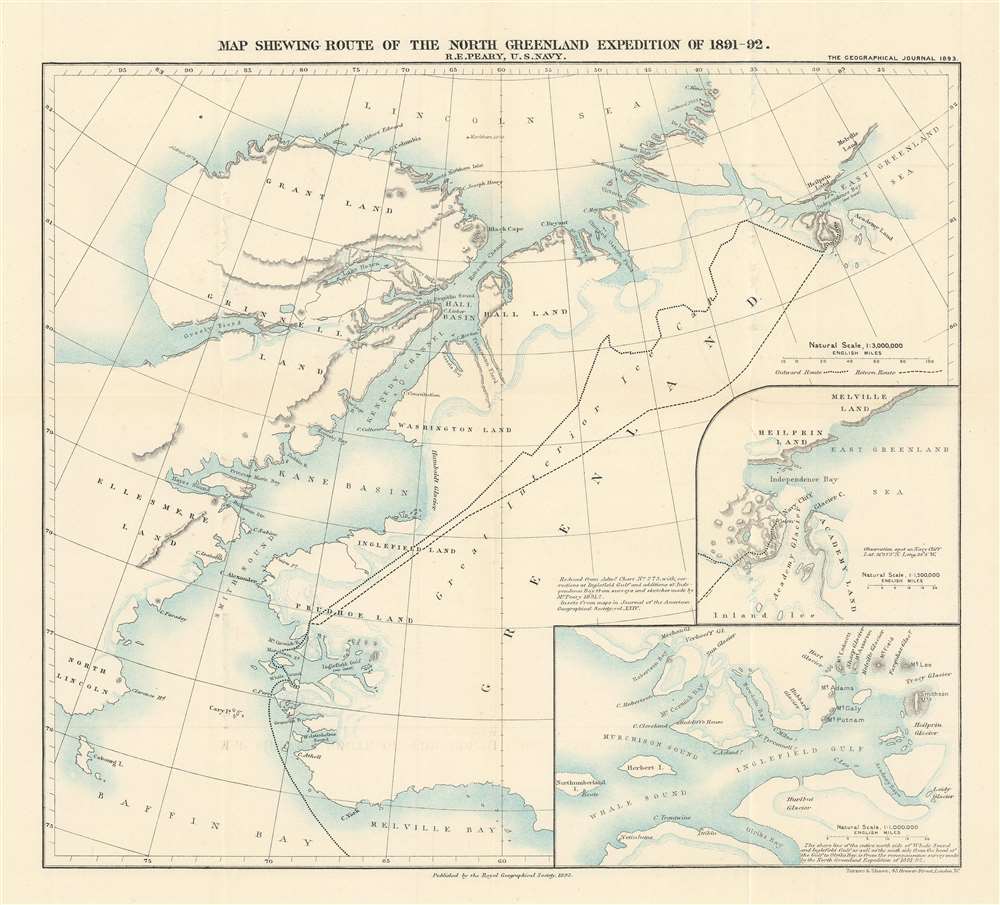 This expedition established without question that Greenland is an island.
$450.00

This is an 1893 Royal Geographical Society map of northern Greenland depicting the 1891-92 Peary Expedition to confirm the insularity of Greenland. Different patterns are used to trace both Peary’s inbound and outbound routes between McCormick Bay and Independence Bay. Channels, capes, basins, fjords, and other formations are labeled. Two inset maps are situated in the lower right quadrant, with one detailing Independence Bay and the Academy Glacier that marked the end of Peary’s outbound journey, while the other, larger inset details the area immediately surrounding McCormick Bay and Peary’s base of operations for the entire expedition.

Peary left New York on June 6, 1891 with the goal of determining whether Greenland was an island or a peninsula of a unknown northern polar continent. His wife, Josephine Diebitsch Peary, accompanied the expedition and stayed at Redcliffe House, a 12x20 foot structure Peary and his men erected for the expedition to survive the winter. During the months between their arrival at McCormick Bay and setting off for Independence Bay, Peary studied the Smith Sound Eskimos and, through his time with them, came to the conclusion that their clothing was much better suited to his needs than anything he had brought with him. Naturally, this meant that Peary ended up fully kitted-out with reindeer-skin jackets, bear-skin boots, and other similar gear. He and his team also spent this time testing different sled designs and woods to have the best material available for their voyage across the ice. The outbound journey took forty-eight days, including several days when weather and other events kept them from moving forward, and covered 650 miles (the last 26 of which was walked overland). The return journey lasted thirty-one days, with only three days of inclement weather. By the time Peary arrived back in the United States September 1892, he had achieved both his goals of studying the local Eskimos and establishing Greenland's insularity.

This map was created and published by the Royal Geographical Society to accompany Cyrus C. Adams’ article ‘Lieutenant Peary’s Arctic Work’ in the October 1893 edition of The Geographical Journal. One example is catalogued in the OCLC as being part of the institutional collection at The British Library.