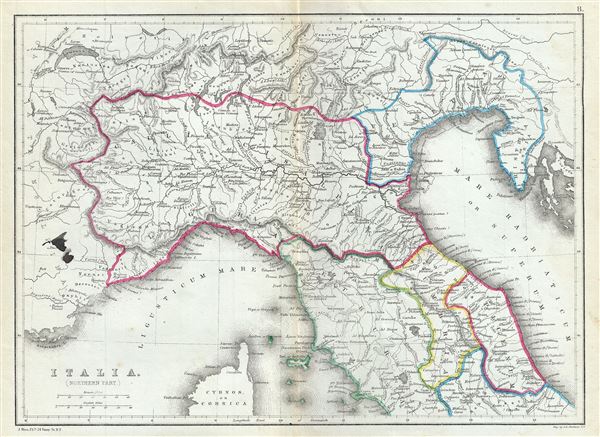 This is a fine 1867 William Hughes map of northern Italy during ancient Roman times. The map depicts the northern part of Italy from Lake Geneva in Switzerland to Lake Bolsena in Italy. The map identifies a host of important cities and towns and uses ancient names throughout. The Roman districts of Picenum, Etruria, Umbria, Venetia, Gallia Cisalpina and Ligurla are also noted. During the first centuries of the Imperial Rome, Italia was the territory of the city of Rome rather than a province, and enjoyed a special status such that the armies of military commanders were not allowed into the region.

This map was created by William Hughes, printed by J. Bien and engraved by G.E. Sherman, for issued as plate 8 in Sheldon and Company's An Atlas of Classical Geography.

Very good. Minor wear and toning along original centerfold. Minor ink stain near left border.
Looking for a high-resolution scan of this?