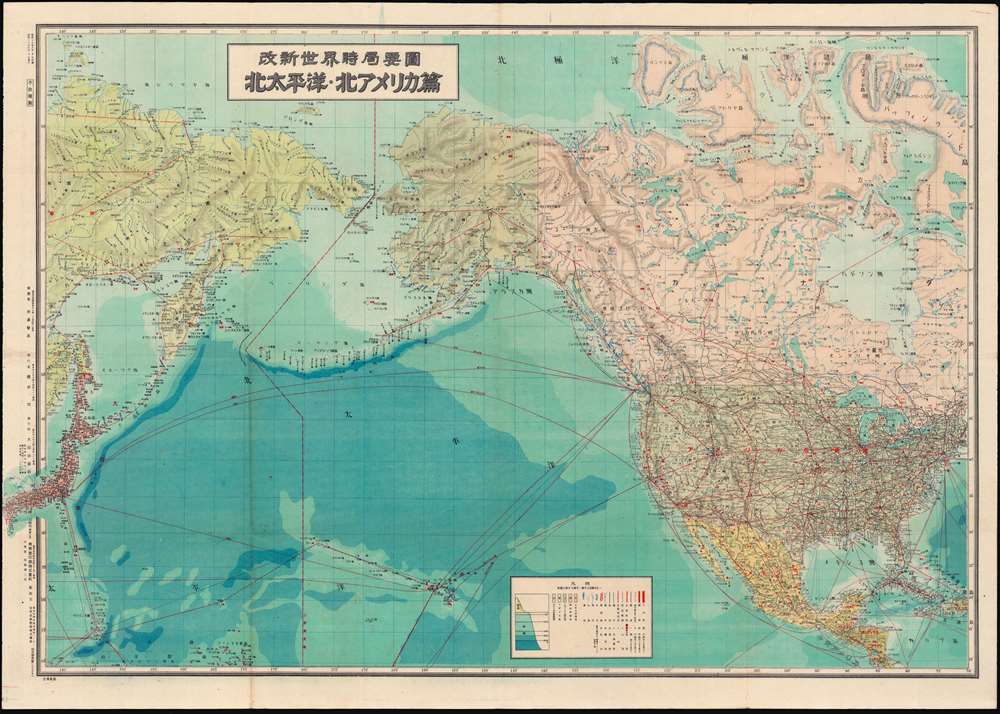 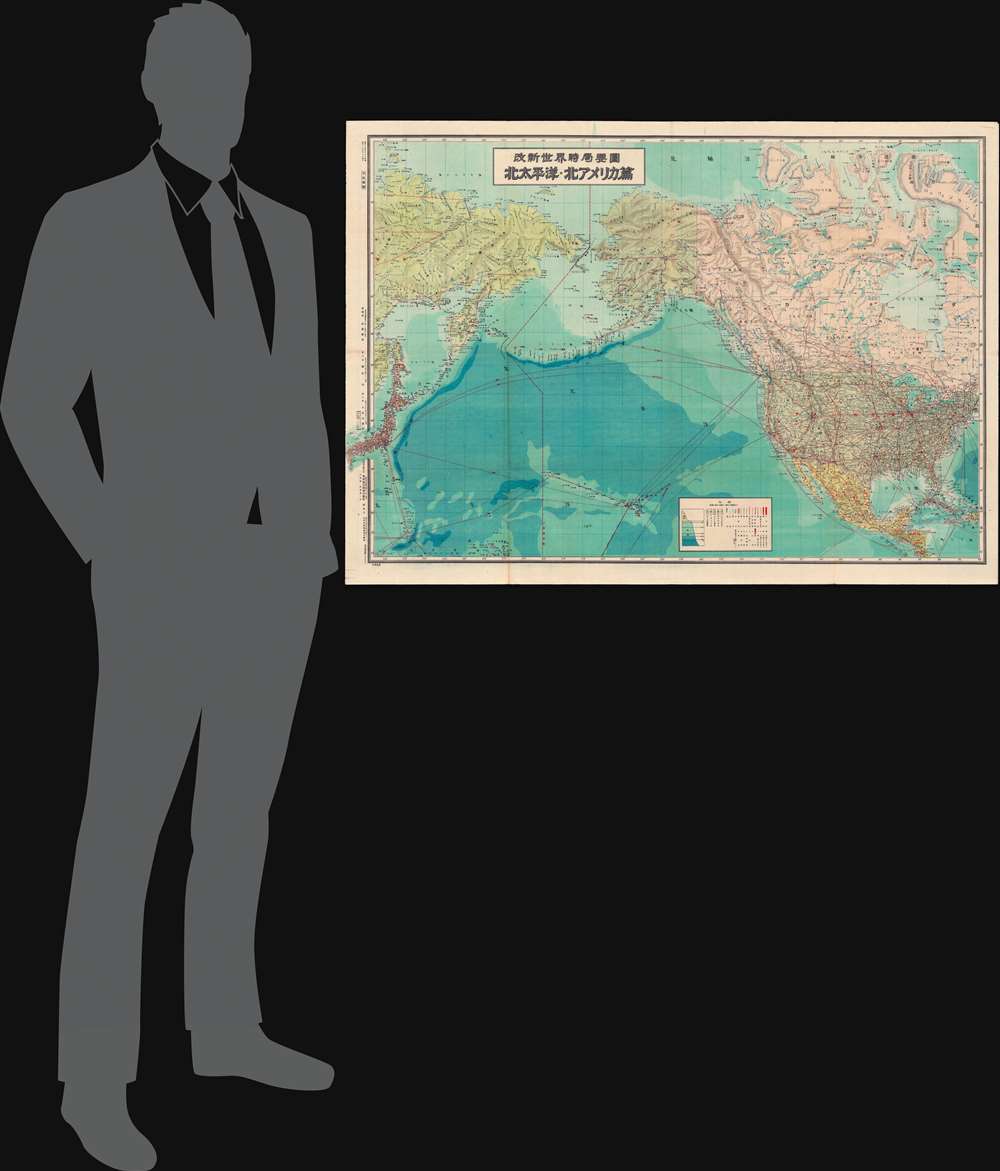 This is a very rare and curious 1943 Serizawa Keigo Japanese map of the northern Pacific Ocean, North America, and the Soviet Far East made during World War II (1939 - 1945). It is extremely detailed in certain respects and reflects Japanese interest in the Pacific at the height of the naval and island-based conflict with the United States during World War II.

Although this is not a military map per se (it notes hot springs and important historical sites among other features), it includes a wealth of information that could be important for military purposes, including the distribution of natural resources and industries (coal, copper, timber, etc.) and the meticulous naming of small islets of the Aleutian, Hawaiian, and Marshall Islands. The identification of cities, even small cities in North America, is also much more thorough than usual, to the extent that the text is often difficult to read because the places names are crowding into each other. The smallest, empty circle in the legend denotes cities of less than one hundred thousand people. It also notes oceanographic and hydrographic information in great detail, including ocean depth (bathymetry), rivers, wetlands, coral reefs, waterfalls, and canals. A final peculiar trait is that, in order to include nearly the entirety of North America, the Japanese home islands jut out into the left margin.

This map was produced exactly one year after the Battle of Midway, which is often seen as the turning point in the Pacific Theater of World War II. In that battle, Japan lost four aircraft carriers, over two hundred aircraft, and their crews. Although the Americans also sustained considerable losses, they were much more able to replace and even far exceed lost fighting capacity than the Japanese. In the year since the battle, the Americans had also taken Guadalcanal, won several naval victories, and shot down the plane carrying the Japanese Pacific Commander, Admiral Yamamoto Isoroku (山本 五十六).

U.S.-Japan Conflict in the North Pacific

This map shows the Pacific during a period of tremendous transition, when the furthest extent of Japanese advances was beginning to be rolled back by U.S. and other Allied forces. Just before this map was printed, U.S. troops had captured Attu (アッツ島), the westernmost of the Aleutian Islands, after a brutal battle in frigid conditions. Although the map marks the Aleutians as 'American occupied,' the Japanese in fact still held Kiska (キスカ島), which they evacuated on July 28, 1943. The Japanese had occupied Kiska and Attu one year before this map was produced, on June 6 and 7, 1942, respectively.
These occupations were the only invasions of U.S. territory during World War II, and indeed the only invasions of U.S. territory after the War of 1812 (other Japanese-occupied territories like the Philippines, Guam, and Wake Island were protectorates, unincorporated territories, or under the control of the U.S. Navy). Japan's aims in the Aleutians are still debated; some historians believe the campaign (known as 'Operation AL' in Japanese, AL作戦) was simply meant to divert American attention from a planned engagement around the Midway Atoll (ミッドウェー島, what became the Battle of Midway), while others argue that it had distinct and discrete goals, including protecting against a potential American invasion of the Kuril Islands, blocking U.S.-Soviet cooperation in the northern Pacific, and demoralizing the U.S. home front.
The indigenous Aleut inhabitants of the Aleutian Islands suffered at the hands of both belligerents in the conflict; those living on Attu and Kiska were placed in internment camps in Hokkaido by the Japanese, while the Americans forcibly evacuated Aleuts from other islands and placed them in internment camps hundreds of miles away in the Alaskan Panhandle.

This map was printed on June 5, 1943 and distributed on June 10 of the same year. It was drafted by Serizawa Keigo (芹澤謦吾), printed by the Shūbidō Printing Co. (秀美堂印刷株式會社), represented by Matsushima Tokusaburō (松島德三郎), in conjunction with, and distributed by, Sakurai Hitoshi (櫻井均) of the publisher Daidō Shuppansha (大同出版社), all based in Tokyo. This map is not known to belong to any institutional holdings. The National Diet Library and the University of Illinois at Urbana Champaign hold a similar map by Serizawa published by Daidō Shuppansha in 1943 dealing with North and South America (改新世界時局要圖 : 南北アメリカ篇), suggesting that both it and this map were part of a larger series. No known history on the market.