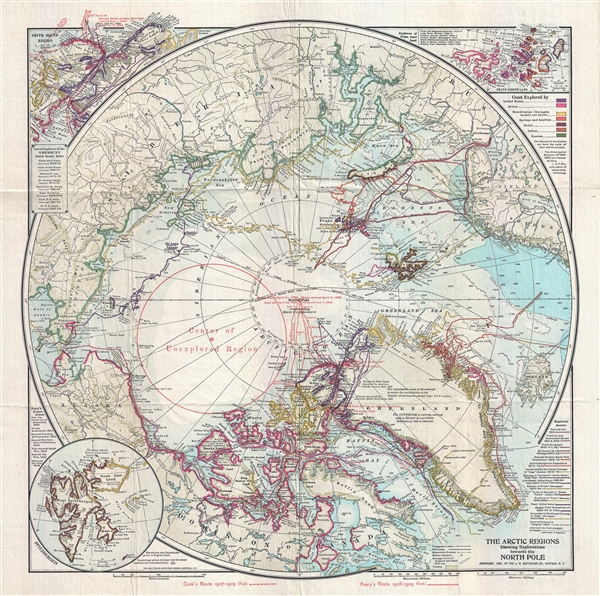 Only known example of this map overprinted to illustrate the Cook-Peary North Pole discovery debate of 1909.

An extremely rare 1909 separately issued map of the Arctic showing exploratory routes towards the North Pole as of 1909. The map covers the Arctic regions as far south as Iceland and the Bearing Straits. The map is based upon a 1907 map issued by J. N. Matthews of New York, but has been updated and revised in 1909 with red overprinting to illustrate the conflicting claims of Robert Peary and Frederick Cook, both of whom believed themselves the first explorers to reach the North Pole.

Frederick Albert Cook, an American private adventurer, explorer, physician, and ethnographer, who claimed to have led an expedition that reached the North Pole on April 21 of 1908. Cook's voyage was poorly documented and he was accompanied only by two Inuit guides Ahpellah and Etukishook, both of whom gave conflicting reports. Cook had previously been a surgeon on an earlier failed 1891–1892 Peary Expedition for the North Pole.

Robert Peary by contrast was an American military man who had previously made several failed attempts to reach the North Pole. His fifth and final attempt began on July 6, 1908, when he and a team of 23 men set sail from New York Harbor. The expedition reached what they believed to be the North Pole on April 6th, 1909. Peary kept careful records, but on his return to New York, discovered that Cook, with whom he may have unwittingly crossed paths on his outward journey, claimed to have already accomplished the deed several months earlier.

Conflict ensued and, after several court cases, it was ruled that Cook, through lack of detailed records, could not prove his claims. Peary received the honor of being the first reach the North Pole and died believing in his achievement. Alas, more recently a modern polar explorer, Englishman Wally Herbert, concluded in a controversial 1989 book that, although Peary may have been within 60 miles of the goal, he did not actually reach the Pole.

We have discovered no record of this map in this edition anywhere. The earlier, original printing, without the Peary-Cook overprinting was issued in 1907. The OCLC identifies only 3 examples of the 1907 editions, and none of this 1909 edition