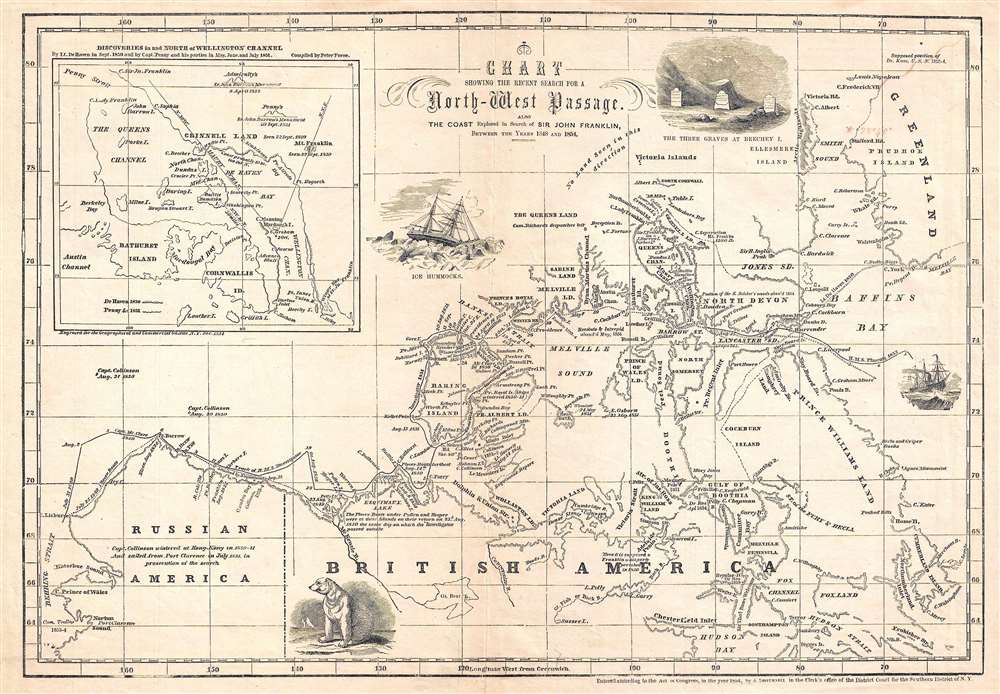 Traces many of the expeditions mounted in search of the arctic explorer Captain Sir John Franklin and his crew.

This is an 1854 John Disturnell map of northern North America tracing the explorations in the North American Arctic in search of Sir John Franklin, an Arctic explorer that went missing in 1847. The map depicts the region from Alaska (Russian America) to Greenland and from Ellesmere Island to Hudson Bay. Incredibly detailed, myriad locations throughout the region are identified. The courses of several different expeditions are traced, including the H.M.S. Investigator and the H.M.S. Phoenix, along with the expeditions led by Lieutenant De Haven and Captains McClure and Collinson. The location where the Resolute and the Intrepid were abandoned in May 1854 is also noted. An inset map in the upper left corner illustrates the routes taken by Lieutenant De Haven in 1850 and Captain Penny and his crew in 1851 in and north of Wellington Channel. Several vignettes also populate the map, including a polar bear, ice hummocks, and the three graves discovered at Beechey Island.

John Franklin's lost expedition and the search to find it

Captain Sir John Franklin and his expedition of two ships, the H.M.S. Erebus and the H.M.S. Terror left England on May 19, 1845 with the goal of traversing the last unnavigated section of the Northwest Passage. The expedition was last seen waiting to enter Baffin Bay in late July 1845. After two years of receiving no news about her husband, Lady Franklin, Franklin's wife who was politically connected, began urging the Admiralty to send out search expeditions. In all, thirty-two ships were sent from England to search for Franklin and his men, and it would not be until 1854 that any hint of their fate would be discovered. By 1859, it was known that the ships had become trapped in the ice and had spent at least a year and a half in that state, before the crews abandoned them and began searching for a way out of the arctic. It was until 2016 that the final piece of the puzzle, the wreck of the Terror, was located.

This map was created and published by John Disturnell in 1854.