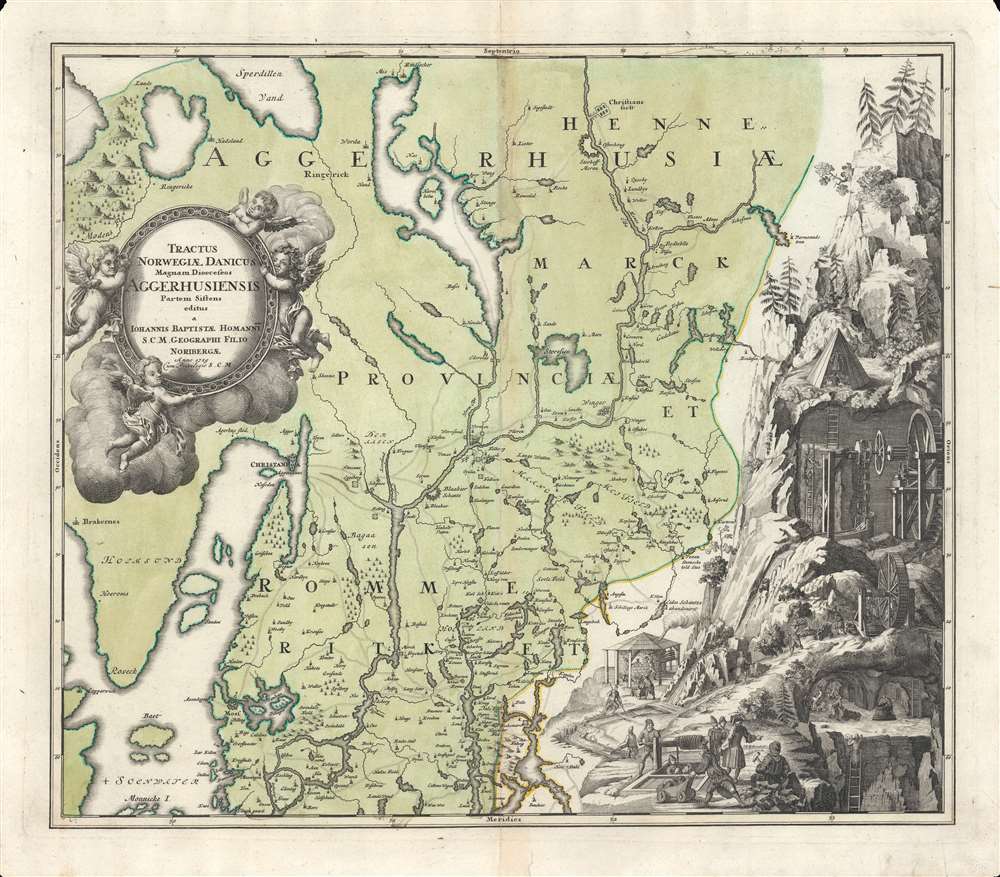 Here is Johann Baptist Homann's 1729 map of the county of Akershus, surrounding Oslo (Christiana), Norway. Aside from its geographic detail, it is distinguished by a large, intricate mining vignette at right - a fascinating insight into 18th-century European mine engineering.

The large vignette at right stands out prominently, portraying human and animal labor, as well as the remarkable engineering of Norwegian iron mines. Mining, especially for iron, flourished in this region in the 17th century, stretching to the west beyond the scope of this map through to Eidsvoll (here as Edsvolde), northeast of Oslo. Although operated by private interests, the state was eager to support and oversee mining given its importance for currency and military hardware. The image, presenting an cross-cut view of the inside working of a mine, is considered one of the best mining images of the early 18th century.

This map was made in the immediate wake of the Great Northern War (1700 - 1721), a long and complicated conflict that saw Denmark-Norway first invade and then be invaded by Sweden. Some territory changed hands, but the most important outcome was the 1718 death of King Charles XII of Sweden, the central figure in the war, while besieging the Norwegian fortress of Fredriksten. Similar to Napoleon a century later, Charles attempted to seize Moscow but the campaign ended in disaster in 1709, leading to his exile in the Ottoman Empire. He then returned to Sweden and tried to quickly attack Denmark-Norway and force a treaty before turning towards his main enemy, Russia. It was during this campaign that he was killed at Fredriksten.

This map is dated 1729 and attributed to Johann Baptist Homann and includes the imprimatur ('cum privilegio') of the Holy Roman Emperor. However, by this time Johann had already died and the company had passed into the hands of his son Johann Christoph Homann, who himself would die the following year, after which 'Homann Heirs' became common on the firm's maps. This map first appeared in the Grosser Atlas über die ganze Welt and was reissued by Homann Heirs several times thereafter, including in 1745 for Atlas novus terrarum orbis, until the end of the century (as in Rumsey 9753.057). The large number of WorldCat entries and the comingling of digital and physical examples in catalog listings makes an accurate census difficult, but the map looks to be cataloged in the holdings of about twenty institutions, while the Grosser Atlas is more widely distributed.

Good. Small areas of loss in corners. Some wear along centerfold. Small wormhole towards bottom to the right of the centerfold. Some creases and other imperfections in the margins. Original color.