1755 Gibson Map of Norway and Sweden 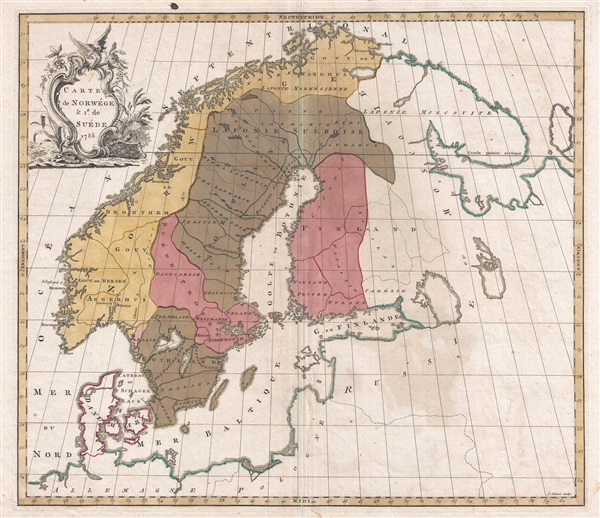 1755 Gibson Map of Norway and Sweden

A 1755 map of Scandinavia of considerable rarity by Jean Palairet and John Gibson. Map covers Norway and Sweden from the high Arctic to the Baltic Sea and from the Atlantic Ocean to Finland. There is little topography except for a mountain range separating Norway from Sweden. Political divisions are noted. A title cartouche of a baroque ethic rests in the upper left quadrant. This map was drawn and engraved by John Gibson for Palairet 's 1755 Atlas Methodique. The OCLC identifies only one other example of this map in the Herzogin Anna Amalia Bibliothek of Weimar, Germany. There is also an example in the Library of Congress. We are aware of at only one other example in private hands.

John Gibson (1724 – 1773) was an English map engraver active in London at the end of the 18th century. Gibson was the son of a locksmith. In 1739 he apprenticed to John Blundell as a stationer of Grub Street. Gibson proved a fine engraver and was much in demand by London map publishers. During his career he produced thousands of maps and was admired as a skilled engraver and sculptor. Among others, he engraved for Emanuel Bowen, Robert Sayer, Jean Palairet, John Rocque, Andrew Dury, and Benjamin Martin. His best known work was prepared in conjunction with Gentleman's Magazine. Gibson, sadly, was not as astute in his fiscal affairs as with the engravers pen and consequently spent much of his life consigned to debtor's prison.